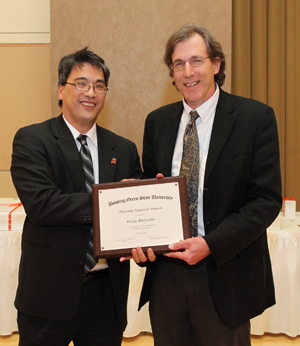 A Bowling Green resident, Bullerjahn has focused his investigations on a topic affecting the Great Lakes and other bodies of water: the nutrients in aquatic systems and factors that affect their numbers and their availability to the ecosystem. As a result of his research collaborations the past three years, he has published 10 articles and a book chapter, been named an editor of two leading science journals, given numerous presentations at national and international conferences, and garnered grant funding approaching $1 million.

In recognition of his efforts, BGSU presented him a $2,000 cash award and the coveted reserved parking space for a year. The award is presented by the Office of Sponsored Programs and Research.

Although he has been exceptionally productive and successful in his aquatic research collaborations the past three years, Bullerjahn would have dismissed the idea of himself as an oceanographic researcher had it been suggested earlier in his career, wrote his nominator and collaborator Dr. Robert McKay, also a professor of biological sciences.

As a molecular biologist, Bullerjahn had expertise in genetic engineering that was a perfect fit for McKay’s concept of developing a living “sentinel,” an organism that could report on how it perceives its environment. Bullerjahn is internationally recognized for his work on cyanobacteria molecular genetics and coincidentally was already working on characterizing the response of cyanobacteria to iron deficits when McKay approached him about collaborating. Cyanobacteria are especially harmful algal blooms because they sometimes produce dangerous toxins.

Instead of having to rely on chemical measurements of dissolved elements, which do not tell scientists how usable those elements are to aquatic life, McKay and Bullerjahn envisioned creating an organism that would “glow” if it encountered an iron deficit in the environment. “Thus began George’s transformation from molecular biologist to oceanographer,” McKay wrote.

Their grant proposal to the Chemical Oceanography division of the National Science Foundation was met with great enthusiasm and moved to the top of the list, McKay said. The program summary stated “The kinds of tools they have begun to develop  . . . are among the tools that will move us into a new age of marine biochemistry and biogeochemistry.”

Although Bullerjahn had received several NSF grants previously, he was particularly pleased by this one. “A proposal hailing from a state university in the Midwest had impressed a group of scientists from the most prestigious oceanographic institutes in the world!” McKay remembered.

Bullerjahn joined BGSU in 1988 and was chair of the biology department from 1996-2000. He has been a principal member of the Center for Photochemical Sciences since 1988. He received his bachelor’s and doctoral degrees from Dartmouth College and the University of Virginia, respectively.