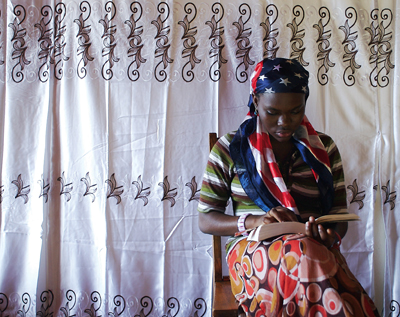 A photo from ‘Here, There and Elsewhere: Refugee Families in Milwaukee’

BOWLING GREEN, O.—A photo-documentary exhibit opening March 18 in Bowling Green State University’s Bowen-Thompson Student Union Art Gallery provides viewers a window into the daily lives of some of the newest - and least familiar - Americans. After fleeing civil war, political persecution and ethnic strife in countries such as Burma, Somalia and Laos, these newcomers are rebuilding their lives and cultures here as generations of immigrants did before.

Through documentary photos by John Ruebartsch and Sally Kuzma and the words of the refugees themselves, the intimate family portraits in “Here, There and Elsewhere: Refugee Families in Milwaukee” are a vivid reminder that all Americans were once newcomers to the New World.

"Refugees are an important part of American history, and our continuing acceptance of them is vital to our health as a liberal democratic society," said Dr. Bruce Collet, an assistant professor in the School of Educational Foundations, Leadership and Policy, whose research focuses on refugee studies and who has been working with Iraqi refugees in Detroit. The project began as a collaboration between Ruebartsch, a Milwaukee-based photographer and documentarian, and Sally Kuzma, an English as a Second Language teacher and visual artist. Since 2009, they have been visiting, interviewing and documenting the lives of refugees.

Collet has organized a panel discussion from 3-5 p.m. March 18 in 315 Union, preceding the opening reception for the exhibit. The panelists will speak about the exhibit, refugees in Wisconsin and the Great Lakes region and refugee issues. In addition to Collet and Ruebartsch, the panel will include Jihan Daman, a psychiatric/clinical therapist who is an Iraqi refugee and works with refugee children and families in Southfield, Mich., and Julie Didelot, a Ph.D. student in sociology at BGSU who is writing her dissertation on gender and asylum.