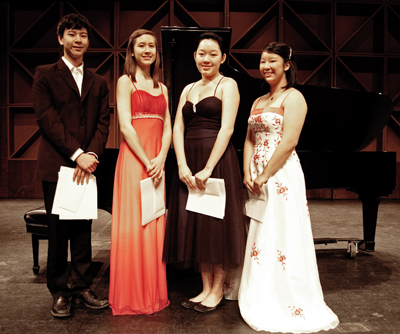 BOWLING GREEN, O.—Four of the eight finalists in the final round of the David D. Dubois piano competition for high school students were chosen to receive grand prizes of $3,000, $2,000 and $1,000. The competition was held Feb. 6 in Kobacker Hall at Bowling Green State University. In total, 17 students, ages 15-17, participated.

Arianna Körting of Gates Mills, Ohio, was the first-prize winner. A student at West Geauga High School, she has performed in prestigious venues from Carnegie Hall to the Gilmore International Keyboard Festival. Besides the David D. Dubois Competition, she has won numerous other competitions including the Julia Crane International Piano Competition and the Bradshaw and Buono International Competition.

Brook Zhang, of Gahanna, Ohio, received second prize in the Dubois Competition. Zhang won the gold medal at the 2007 World Piano Competition, which resulted in a performance at Carnegie Hall. He currently studies piano with his teacher, Nina Polonsky.

Naomi Causby of Columbia, S.C., and Danni Feng of LaSalle, Ontario, Canada, tied for third prize. Causby is a junior at the Fine Arts Center in Greenville, S.C. The winner of several awards for piano performance both nationally and internationally, she has participated in numerous summer programs and contributed in master classes with renowned performers and professors. Feng was born in China but continued her piano studies in Windsor, Ontario, after her family moved there. She has won competitions in Canada and is a student of Dr. Logan Skelton at the University of Michigan.

The David D.Dubois Trust established the David D.Dubois Piano Competition at BGSU to enhance the piano program in the College of Musical Arts. It provides a number of scholarship opportunities for high school students to attend BGSU, encourages undergraduate piano students to develop innovative programming ideas for outreach projects and supports current piano students’ participation in music festivals around the world.