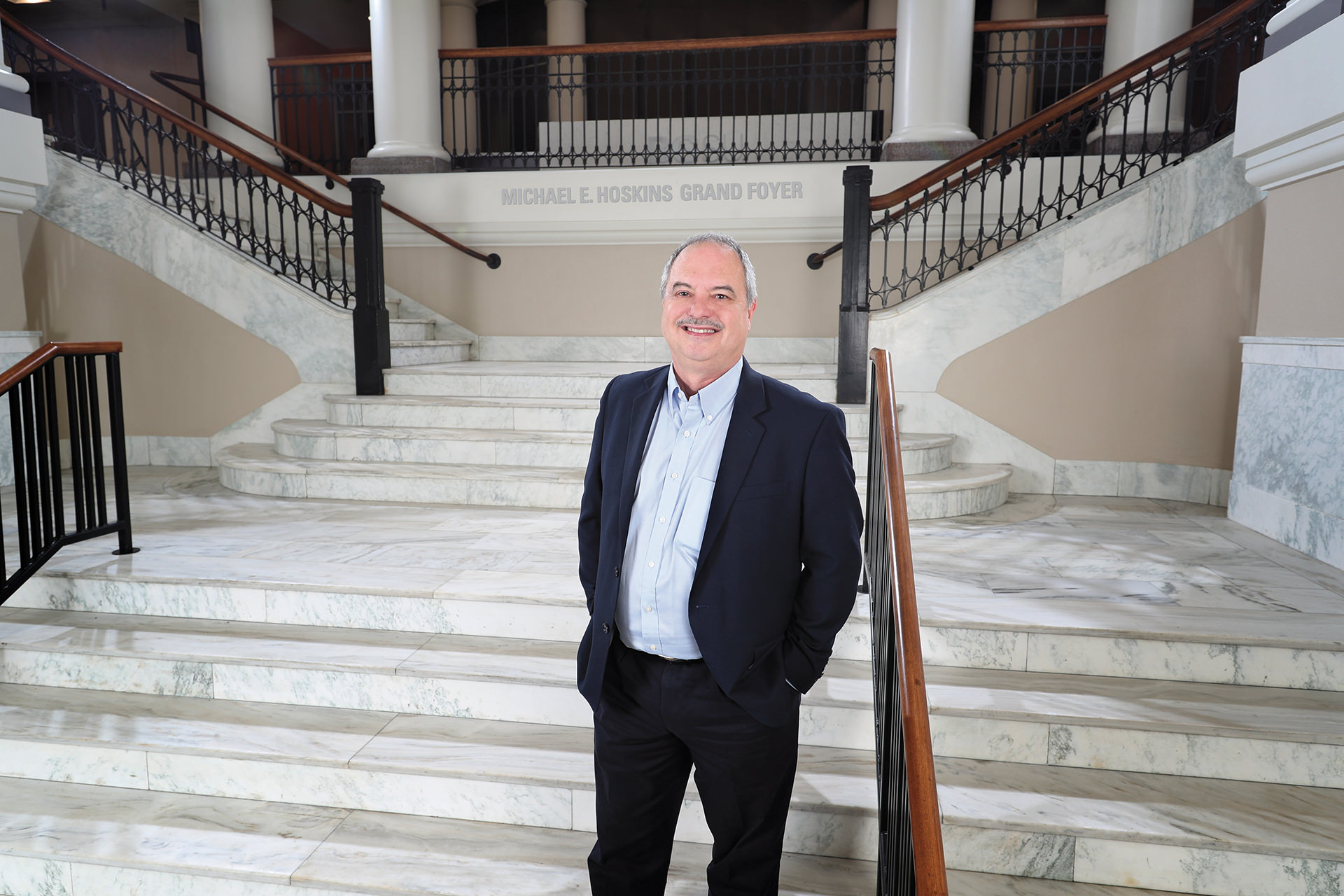 “Mike Hoskins really understands that having a global experience and understanding of the world can make a difference in students’ lives, both personally and professionally,”
- President Rodney Rogers

Mike Hoskins ’77 had a world-class education at Bowling Green State University, and he has learned valuable lessons out in the world, beyond the borders of the United States. He wants to ensure that current and future BGSU students will have those same opportunities.

That’s why Hoskins decided to make the Hoskins Global Scholars Fund a permanent fixture by providing a significant gift to his alma mater. In recognition of his contributions to the quality of the student experience at BGSU, the University has named the Michael E. Hoskins Grand Foyer in University Hall, which also was part of his gift, in his honor.

“Mike Hoskins really understands that having a global experience and understanding of the world can make a difference in students’ lives, both personally and professionally,” BGSU President Rodney Rogers said. “The Global Scholars Fund provides for studying abroad and a more self-directed and deeper learning at a very formative time in students’ lives. The scholarship gives BGSU students an advantage in their careers and strengthens the University’s programs.”

“The idea here is to give that emerging star student who has passion the freedom and that platform to take their idea and really do something with it on an international level,” Hoskins said. “In my own life, I’ve lived and worked outside of the U.S. for 15 years, I speak three languages and I’ve been in over a hundred countries. I know what it’s like, and I know how important it is to play in the world. That might not always be obvious when you’re in college, but I think it lurks in some students’ minds that it’s a big part of life. We hope to light that spark in those people who have some big ideas.”
Each year, the Hoskins Global Scholars Program provides financial support in the amount of $5,000 for up to three selected students to participate in an international experience. These funds can be used to enhance the experience in their area of interest and stretch their boundaries with a creative pursuit, independent study, internship or service project. 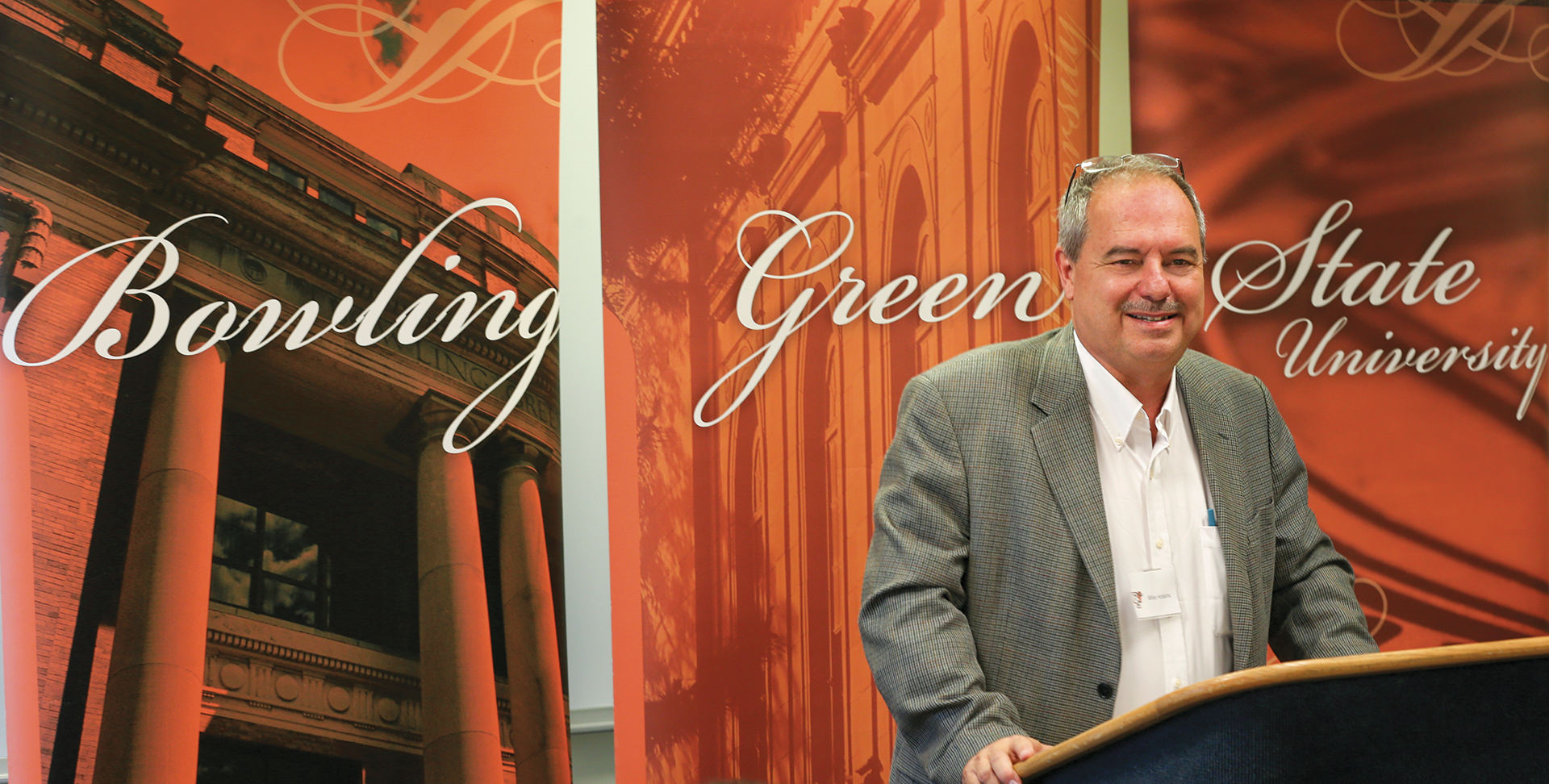 “You do a study abroad, and it ends up being life changing for a lot of people."

“I grew up in Bowling Green, so I was a townie and a student of the University,” Hoskins said. “Our family moved here because my dad took a job at BGSU. He was on the faculty here and he was invited to come here by the president at the time, William Jerome, and Bill Schmeltz, the dean of the College of Business, to create one of the first dedicated international business programs in the United States.”

Dr. William R. Hoskins, professor emeritus of marketing, taught at BGSU from 1965 to 1984.

“My dad was one of the four founders of the Academy of International Business, the biggest faculty organization in the world for academics who are interested in international business. This was the early ’60s, and the U.S. was not at all geared up for globalization.”

The younger Hoskins developed some of his viewpoints from growing up in an international household.

He then traveled overseas and lived outside of the United States for 15 years before settling in Austin, Texas.

“I ended up in computers,” Hoskins said. “I’m a serial entrepreneur. I started my first software company at age 27 in the Middle East and then grew and sold a succession of software companies, the last couple in Austin. I caught that whole software boom in the software industry, and it’s been a really good career for me.”

For Hoskins, all roads eventually led back to Bowling Green.

“It happens in life, you drift away from what you did before,” he said. “I came back to Bowling Green for the first time in the mid ’90s for my high school reunion and reconnected with some friends and started coming back for the reunions more regularly. At one of the reunions, I was talking to one of my classmates from high school, Mike Marsh, and he was on the Board of Trustees at BGSU at the time. He’s now still heavily involved at the University. He had been a good friend of mine in high school and actually lived across the street from me growing up.”

Hoskins talked with Marsh about getting involved with BGSU, which led to a meeting with the then-new dean of the business college, Dr. Rodney Rogers.

“I met the dean for a coffee at the Starbucks on Wooster Street, and we ended up having this fascinating back-and-forth conversation for two hours,” he said. “He really reignited my interest in what was going on at BGSU. By that point in time, I had sold a couple of businesses and was in a position to help a little bit.”

That conversation inspired Hoskins to make some gifts to the College of Business for an education-abroad program.

“My dad had built up the international business programs in the College of Business, and they had atrophied somewhat with his departure,” Hoskins said. “I thought we could reenergize the programs, so I gave some money to study-abroad scholarships in the college, and it started running again with the help of the faculty members. The study-abroad program is back running at full speed now, and the students are heading off in every direction.”

Since his reconnection with the University, Hoskins has collaborated with BGSU entrepreneurship programs, and was inducted into BGSU’s Entrepreneurial Leadership Hall of Fame in 2009. He was selected as one of BGSU’s 100 Most Prominent Alumni as part of the University’s Centennial celebration and received the Alumni Association Accomplished Graduate Award from the College of Business. His support has earned him membership in The Presidents Club.

Around the time Dr. Mary Ellen Mazey was named president and Rogers was named provost at BGSU, in 2011, Hoskins started thinking about larger contributions, including support for the renovation
of University Hall, where International Programs and Partnerships is located.

“Rodney and I had grown pretty close by this time, and President Mazey was really a ball of energy,” he said. “We talked about a larger series of gifts, and I got involved with the Foundation and started making larger annual gifts for a program that was kind of the early version of what we are endowing now.

“You do a study abroad, and it ends up being life changing for a lot of people. The Hoskins Global Scholars idea was, ‘Why don’t we try to identify here at Bowling Green some of the key players, both students and faculty, and see if we can fund a little international spark and passion in our lives?’ This has been an evolution from helping study abroad programs for the first five or six years to building a University-wide Hoskins Global Scholarship program.

“The Hoskins Global Scholar Fund was done on an annual basis, but there wasn’t a committed giving plan. I was impressed with Bowling Green, Mary Ellen’s energy and Rodney’s dedication to the University, and I thought this would be a nice thing to endow permanently at BGSU.” 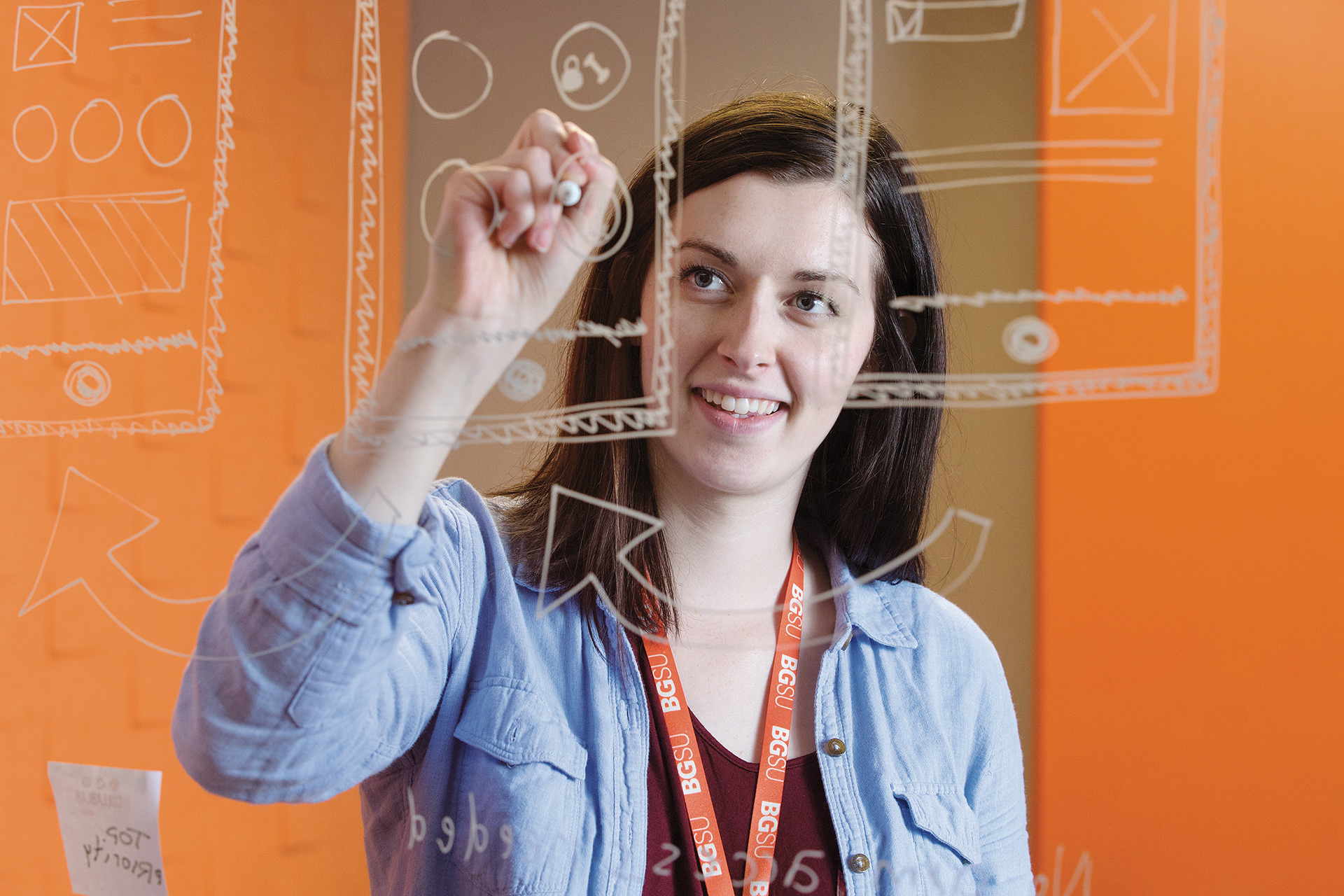