Margaret Rettig spent many summers boating and swimming in Lake Erie while visiting her grandparents in Marblehead, a small lakeside village in Ottawa County, Ohio.

She remembers being out on the lake as an adolescent and asking her parents why the water was green and scummy-looking.

“I actually did a middle school science fair project to see what chemicals were most likely to remove nitrogen and phosphorus from water since those primarily cause algal blooms,” Rettig said.

Rettig’s interest in water quality and algal blooms hasn’t waned since that initial discovery in middle school. Instead, it’s become integral to her journey as an undergraduate marine and aquatic biology and data science double-major at Bowling Green State University.

With mentorship from Dr. Christopher Ward, assistant professor in the Department of Biological Sciences at BGSU, Rettig is studying rRNA sequence data to understand how microbial communities in Sandusky Bay interact with harmful algal blooms. 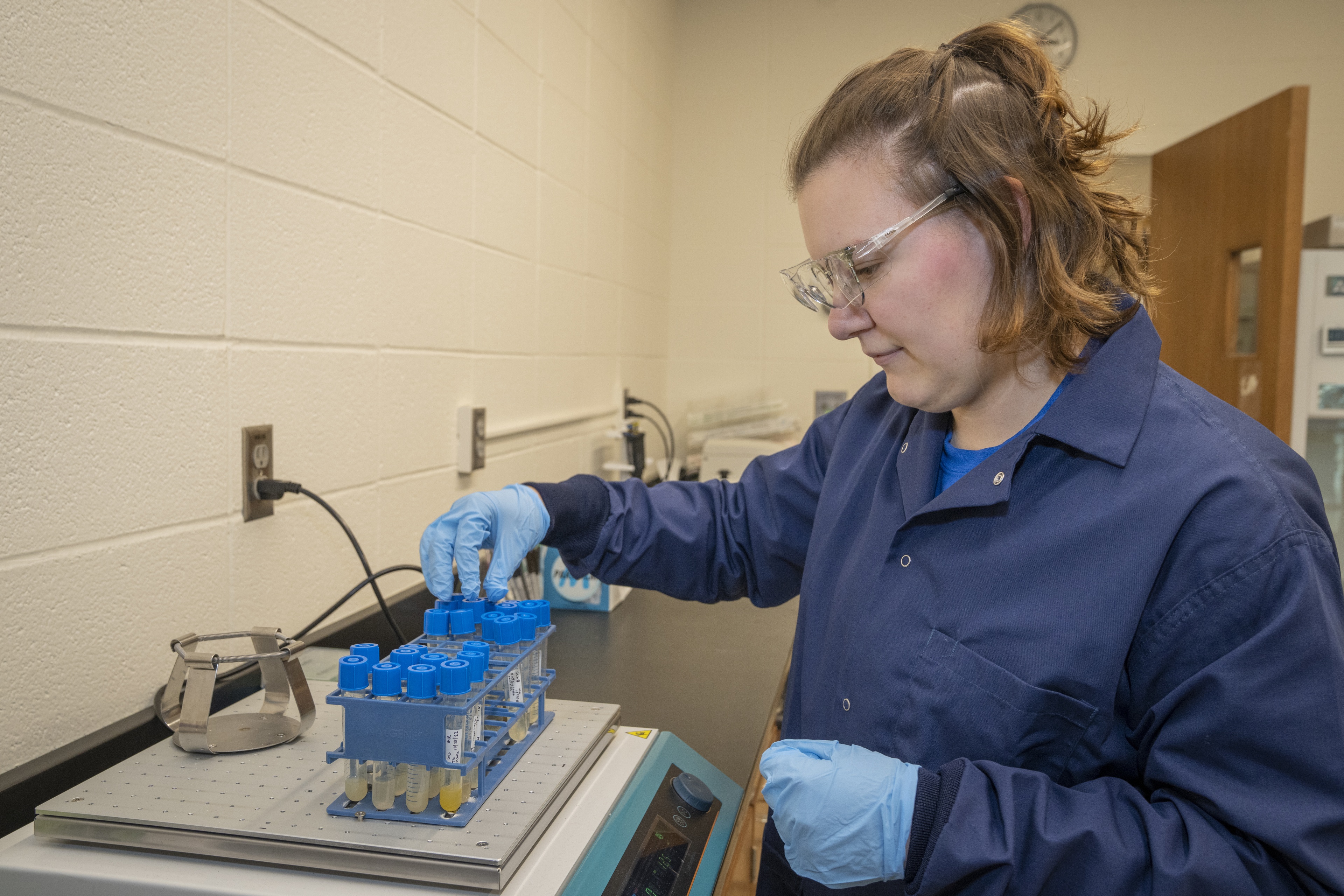 “We suspect that these microbial communities we’re working to identify have some kind of impact on the algal blooms in Lake Erie,” Rettig said. “We’re looking to see how the microbial community varies over space and time and how it interacts with the other species in Sandusky Bay.”

Rettig, now a Marblehead resident, considers the research integral to the future of Lake Erie and its surrounding communities.

“I grew up visiting Lake Erie, and now it’s my home,” Rettig said. “I’ve always been really passionate about water quality, and I want to continue my research into harmful algal blooms in a way that can help alleviate some of the problems they cause. The more we learn about them, the better we can work to prevent them.”

Rettig’s interests in algal blooms and her experience studying rRNA sequence data were among the reasons she was chosen for a highly competitive National Science Foundation Research Experiences for Undergraduates (REU) program during the summer.

Rettig, an Honors College student, spent 10 weeks at the University of Rhode Island Graduate School of Oceanography - one of the world’s premier academic institutions of oceanography and ocean exploration.

Rettig’s marine biology and data science background made her a competitive applicant for the REU program as a rising junior.

“I’m really well-equipped to analyze RNA data because I understand it both from a biological and data science standpoint,” she said. “I have the computational knowledge that many people are missing. All the opportunities I’ve been provided at BGSU from working in the lab to the critical thinking skills I developed through the Honors College classes have contributed greatly to my growth and development as a researcher."

Margaret Rettig collected plankton during her NSF internship at the University of Rhode Island Graduate School of Oceanography.

While in Rhode Island, Rettig studied a class of parasite dinoflagellates called Syndiniales, which are not widely studied, yet could significantly impact ecosystem functionality.

“We don’t know their exact function in the food web, but we know they exist and likely play a pivotal role,” Rettig explained. “By characterizing the parasite diversity and dynamics of the community, we can better understand the ecological importance of these parasites.”

Rettig’s goal throughout the project was to understand how the Syndiniales parasite communities changed over time and across the euphotic zone, the uppermost layer of the ocean where sunlight penetrates the water.

“These parasites infect their host, and they can alter ecosystem functions by either killing off certain things or causing cells to lyse, which is when they break apart and release toxins,” Rettig said. “The research I did can help contribute to understanding the ecological importance of these parasites.”