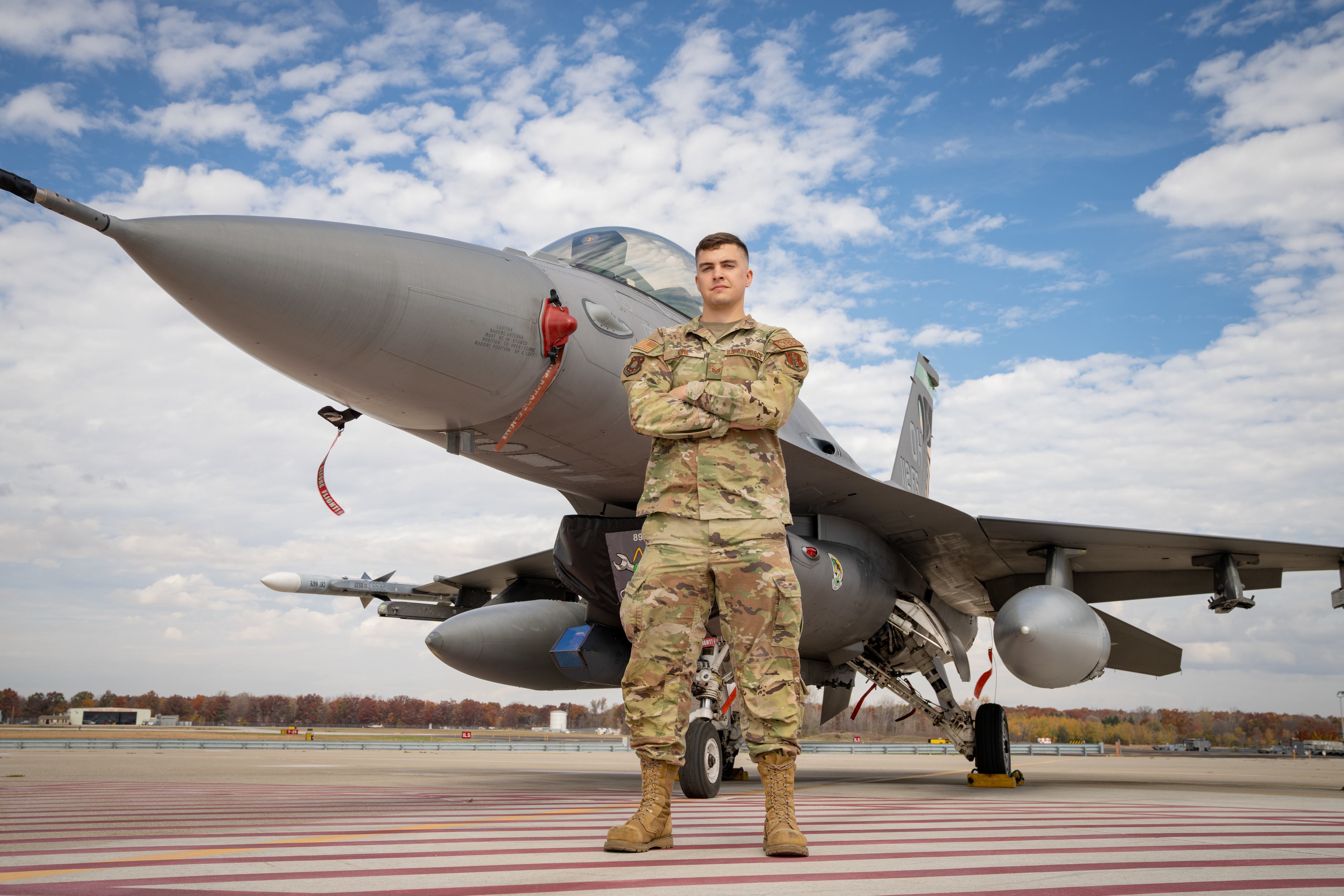 He’s changed majors, taken a brief hiatus and returned to the University online to finish his degree while working full time at the Ohio Air National Guard’s 180th Fighter Wing.

Through it all, Kirk refused to give up in his pursuit of becoming an F-16 fighter pilot and says he frequently relies on support from the University’s Nontraditional and Military Student Services (NTMSS).

“Everyone there is so welcoming,” Kirk said. “Being a military student isn’t always easy, but knowing I have the support of the NTMSS office and the University has helped make my journey easier.”

Kirk, a fourth-generation military service member, enlisted in the Ohio Air National Guard in 2018 as a senior in high school.

“I basically grew up at the end of the runway,” said Kirk, whose family home in Holland, Ohio, is on the flight path of Eugene F. Kranz Toledo Express Airport. “I would see fighter jets, cargo planes, passenger jets, and they’d be 1,000 feet above my head. I got very used to being around planes, and I thought it was the coolest thing.” 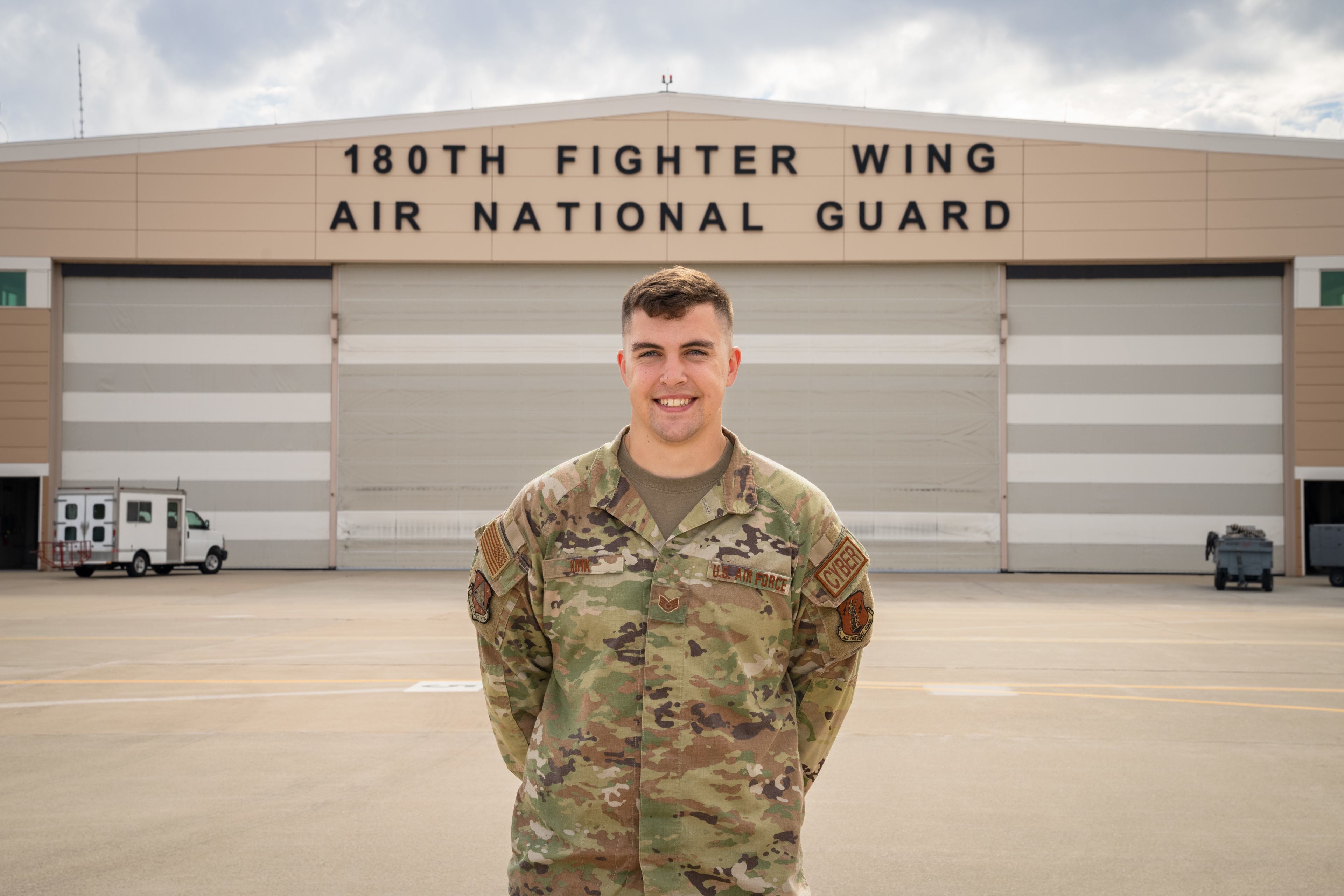 He enrolled as an aviation major the following fall at BGSU, recently ranked as one of the top universities in the nation and Midwest for its support of veterans and active military students.

Kirk, a first-generation college student, earned his private pilot’s license in the summer of 2020 and was gearing up to get his instrument rating when he suffered a torn ligament in his knee that kept him from flying.

Shortly after being medically cleared to fly, Kirk’s guard unit was activated to assist with prison guard shortages due to COVID-19. Kirk enrolled in online classes with help from NTMSS but acknowledged it was challenging to keep up with his long hours and changing shifts at the prison.

“I didn’t feel like I would be able to perform as best I could, so ultimately, I decided to take a break from school,” Kirk said.

The three-month activation was followed by federal orders to work at vaccination clinics in Cleveland, which lasted until summer 2021.

When Kirk returned to the 180th Fighter Wing after back-to-back activations, he was offered a full-time position as a radio frequency transmission systems operator in the communications squadron on base. He began that role in July 2021 and is responsible for maintaining and testing all communications equipment, from on-ground walkie-talkies to inflight radio communication systems.

Chase Kirk is grateful for the support of the University’s NTMSS office while serving full time in the Ohio Air National Guard as a radio frequency transmission systems operator. (Haven Conn/BGSU photo)

With the fall semester approaching, Kirk reached out to David Rice, assistant director at NTMSS, to explore options for finishing his degree.

“He went back and forth. He really struggled with it,” Rice said. “He was ready to change his major overnight, and then a couple of weeks later, he’d say, ‘Maybe I want to stay in aviation.’”

Rice supported Kirk through the process and provided him with information on the timeframes and outcomes of continuing with his aviation degree or following an alternative path, one of the many ways NTMSS supports active military students and veterans.

NTMSS also provides one-on-one counseling, peer support and connections with outside organizations like the Department of Veterans Affairs and Student Veterans of America.

Kirk decided to pursue a Bachelor of Science in management and technology through the University’s eCampus. The 100% online program is ideal for his full-time work schedule and allowed him to receive credit for military work experience.

The program is one of the most popular online degrees at BGSU, providing students with skills applicable to numerous careers and industries, including management, project management, training program development and instructional design and delivery.

“Getting back into the swing of things was a big adjustment,” Kirk said. “But what I've learned from BGSU is that it's a tight-knit community. The common theme seems to be helping others when you can. I used to call Dave Rice on my lunch breaks at work regarding school, benefits and classes I need to take, and he was always there to help."

Kirk will graduate from BGSU in December and plans to apply to become an officer in the U.S. Air Force, the next step to becoming a pilot in the military.