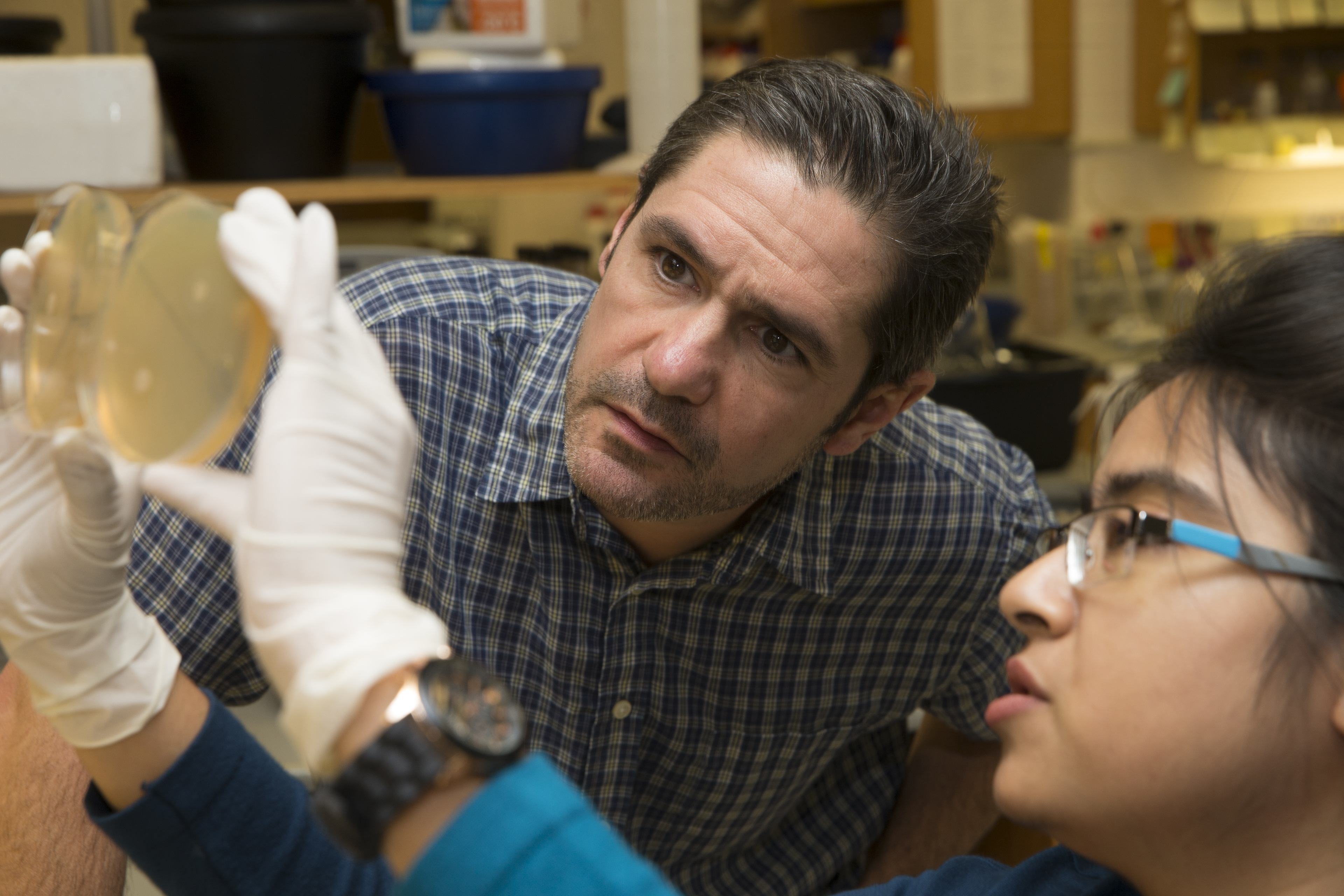 Dr. Hans Wildschutte has received nearly $1 million in funding since 2018 for the discovery of new antibiotics and alternative treatments

Most people don’t know a world without antibiotics.

They’ve been relied upon for decades to treat mild to severe bacterial infections. But their long track record of success is waning in the face of alarming antimicrobial resistance.

More than 1.2 million people died from antimicrobial-resistant infections, and they contributed to nearly 5 million deaths worldwide in 2019, according to the most recent data available from the Centers for Disease Control and Prevention (CDC).

“Multi-drug resistant pathogens are a global problem,” said Dr. Hans Wildschutte, associate professor in the Department of Biological Sciences at Bowling Green State University. “You don’t even have to be in the hospital. You can just be outside and get a cut, and if you’re infected with one of these pathogens, it can be deadly.”

Without intervention to slow the rise of drug resistance, deaths could reach 10 million per year by 2050, surpassing cancer as the leading cause of death, the Review on Antimicrobial Resistance reported in 2019.

Wildschutte is leading research at the University on the discovery of new antibiotics and alternative treatments in the fight against multi-drug resistant pathogens. He has received nearly $1 million in funding since 2018 from the National Institute of General Medical Sciences (NIGMS), part of the National Institutes of Health (NIH), and the Cystic Fibrosis Foundation.

The World Health Organization (WHO) declared antimicrobial resistance among the top 10 global public health threats in 2021.

Antibiotics have been making their way into the environment for decades from misuse and overuse in raising crops and livestock and medicine, allowing bacteria and pathogens to build up resistance over time. The increased use of antibiotics among COVID-19 patients has only exacerbated the problem, according to the NIH.

In total, more than 5,000 environmental Pseudomonas strains (env-Ps) have been collected from polluted and pristine water systems around the world, leading to the discovery of several that successfully inhibit drug-resistant pathogens, Wildschutte said.

The next step involves purifying and characterizing potentially novel compounds from those environmental strains to develop new antibiotics through a collaboration with Dr. Kou-San Ju, assistant professor of microbiology and medicinal chemistry and pharmacognosy at Ohio State University.

Another focus of Wildschutte’s research is phage therapy, a reemerging treatment first discovered in 1917 that uses viruses to infect and kill bacteria. The viruses, called phage, attach to and enter the pathogen and release additional virus particles, breaking open the cell and killing it.

“Phage therapy is not FDA-approved, but it is being used in a case-by-case basis for terminally ill patients,” Wildschutte said. “People are dying. What other choices do we have?”

Funded by a grant from the Cystic Fibrosis Foundation, the research is concentrated on a bacterial pathogen called Pseudomonas aeruginosa, declared by the WHO as one of the most difficult bacterial infections to treat. It commonly infects the lungs of cystic fibrosis patients.

Wildschutte, in collaboration with Dr. Ray Larsen, associate professor of biology at BGSU, has identified about 25 phage that will kill antibiotic-resistant Pseudomonas aeruginosa. That research is shared with a phage bank and made available to other researchers and doctors.

“If anyone needs any of these viruses, they can reach out to us and see if ours can infect the pathogen they’re working with,” Wildschutte said.

The interaction between the phage and the pathogen is so specific that identifying the right virus is complex and time-consuming.

“It’s just so specific,” he said. “So specific that the same virus can’t necessarily cure two people infected with the same pathogen.”

Phage therapy has shown some success and was used in the United States for the first time in 2016. Dr. Tom Patterson, a psychiatry professor at the University of California, San Diego (UCSD), was infected with an antibiotic-resistant superbug while vacationing in Egypt.

“Tom was on his deathbed,” Wildschutte said. “He was on a ventilator and in a coma for about a month. A week after they gave him his first injection of phage, he woke up. It was remarkable, and he is still alive and well.”

BGSU alumnus Matthew Henry, who previously worked in Larsen’s lab and is now at the Naval Medical Research Center, was involved in isolating one of the phage used to save Patterson.

Wildschutte, Larsen and Dr. Kathryn Kauffman, assistant professor in the Department of Oral Biology at the University at Buffalo, recently submitted a $2.2 million grant proposal to NIH to further research phage therapy over the next five years.

Because of the proven success with Patterson and other clinical cases, Wildschutte said phage therapy is predicted to become the new treatment for antibiotic-resistant infections.