'A great day, a great crowd, a great game and a great spirit’ - Here’s how the very first BGSU Homecoming came to be in 1922 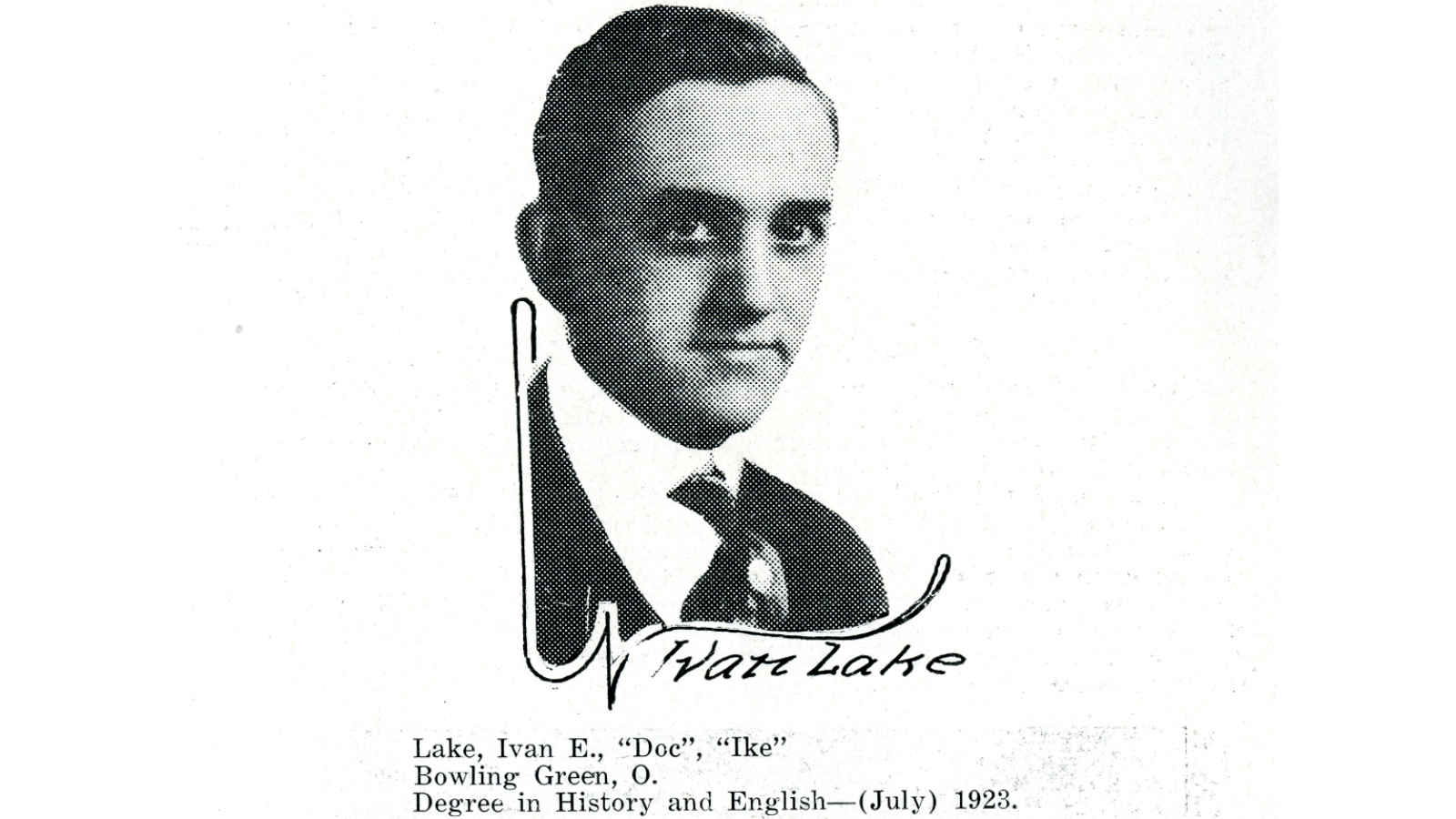 If you ask newcomers to BGSU about Ivan Lake, you may be met with, “Where’s that?” But Ivan Lake isn’t a place. He’s a fundamental reason why the University is celebrating 100 years of BGSU Homecoming.

Ivan "Doc" Lake, Class of 1923, was a member of the first football squad in 1919 and was also the first letterman in BGSU tennis history. And those weren’t the only firsts for which Lake was responsible. He also came up with the name Falcons as the University’s nickname, as well as the name Bobcats for Bowling Green High School.

But this year, Lake is particularly in the spotlight for starting the very first homecoming celebration at Bowling Green State Normal College in 1922.

Plans started months in advance for the first homecoming game and events, which took place Nov. 4, 1922. The day’s festivities were planned by the Win-One Club, for which Lake served as president. The Win-One Club’s goal was to work through students and alumni alike to build up the statewide reputation of what was then Bowling Green State Normal College.

In the Bee Gee News, Lake espoused the virtue of “the psychology of public opinion and how students might utilize this to the good of their college,” making Lake one of the University’s earliest influencers.

“Now the success of this day depends upon the response that we receive from everyone connected with the college," Lake said. "Every student should get into the work heart and soul, for it will well repay them for any extra endeavor that they make.”

The Win-One Club broadly advertised all across Ohio, but especially at the Northwest Ohio Teachers Institute at Toledo's annual association meeting, which hundreds of former students and graduates attended on Oct. 28, 1922. The concept of homecoming also was shared widely during the summer with students taking classes during that session and it was expected that “a majority of them will be here for the celebration,” according to an Oct. 20, 1922, Bee Gee News article.

“Let everyone try to get in touch with some former student, graduate, or friend of the college, urging them to come to this college upon the one day in the year which is set aside especially for them,” Lake implored the student body in 1922.

The slogan for homecoming was "A great day, a great crowd, a great game and a great spirit." 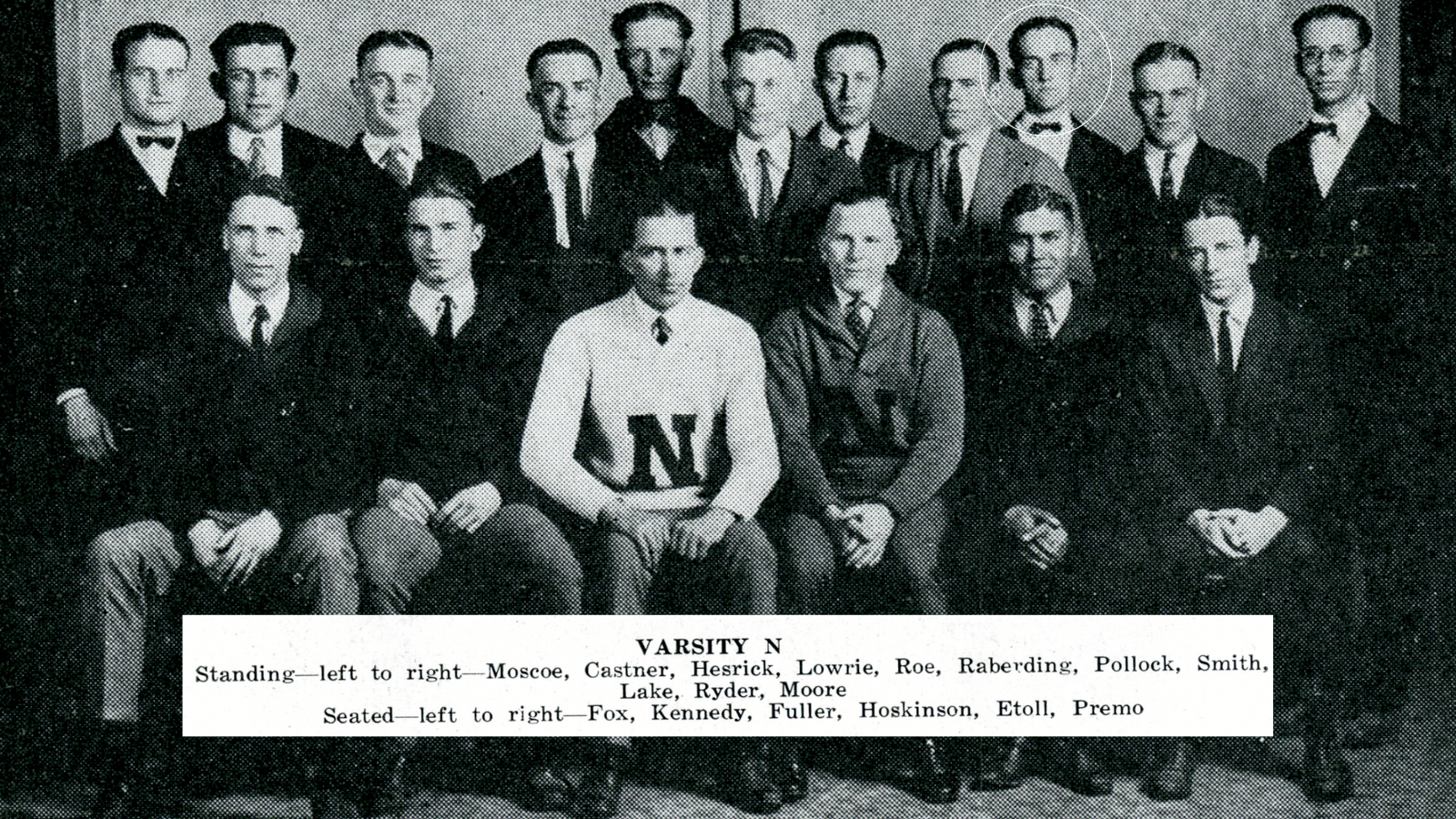 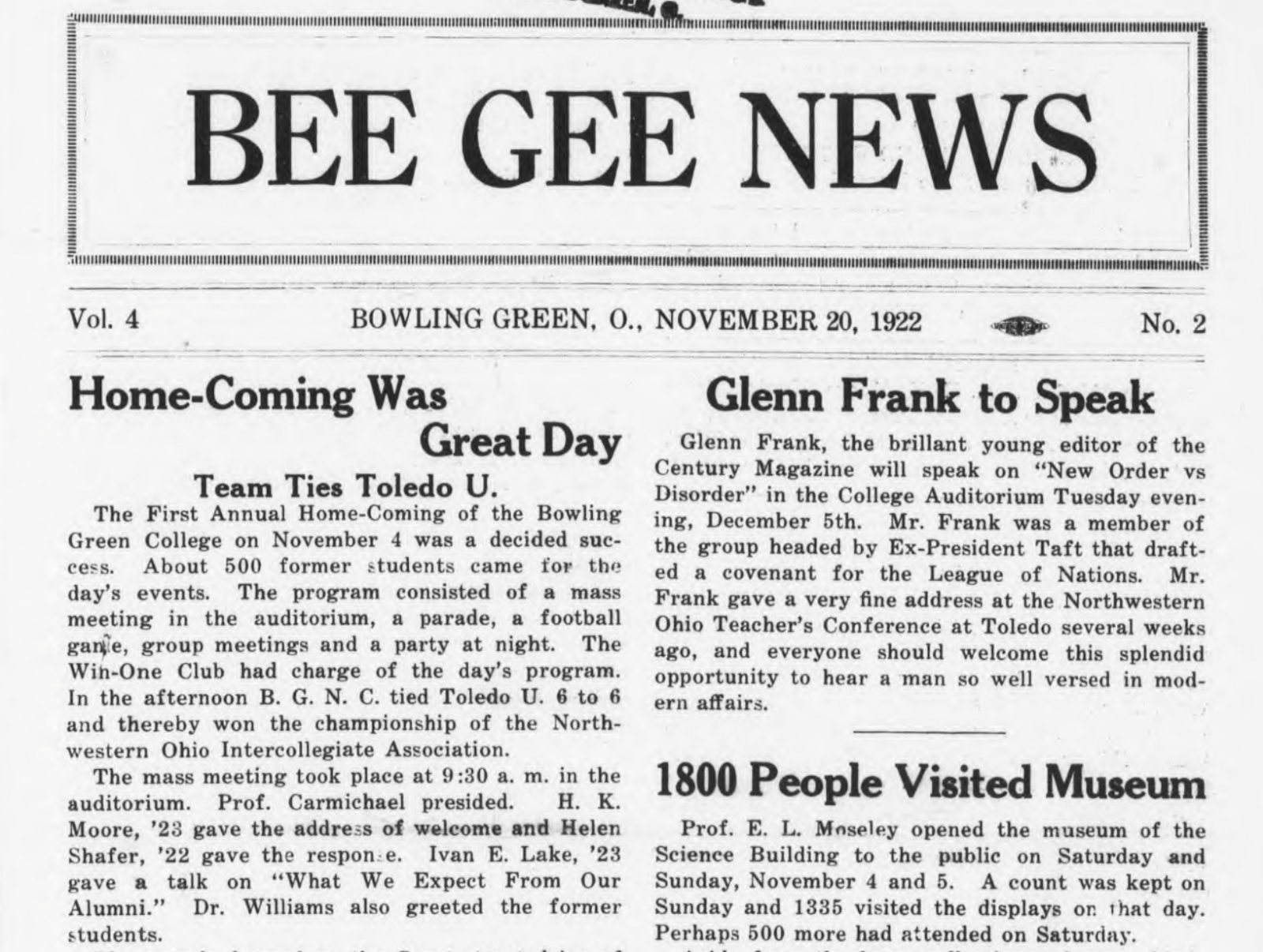 'Home-coming' was a great day

The first homecoming coincided with the last home football game, a conference matchup against Toledo, when “the largest crowd of students that ever will be seen on the Orange and Brown campus (was) expected to watch and participate in the ceremonies of the day.”

About 500 former students came for the day’s events, and the weekend kicked off with the Drama class’ presentation of “Little Women” the night before. “As November fourth is the date of the first Home-Coming,” an article promoting the play said, “the class hopes to number among the spectators many old friends and former students. … Admission thirty-five cents; with reserved seat, fifty cents.”

Homecoming itself started early with a 9:30 a.m. “peppy program of music, yells and speeches” in the auditorium, involving the college quartet and several soloists. Professor J.W. Carmichael presided over the proceedings, which included a welcome address by H.K. Moore, Class of 1923, followed by a response by Helen Shafer, Class of 1922. Lake gave a talk on “What We Expect From Our Alumni.”

Next, a long parade formed on East Court Street and worked its way through town ahead of the football game. “Almost every organization in the school was represented by a float that was either of an artistic or an humorous nature,” according to the Nov. 20, 1922, Bee Gee News.

The parade went down East Court Street, Prospect Street, East Washington to South Main Street and then through the business district.  ﻿ 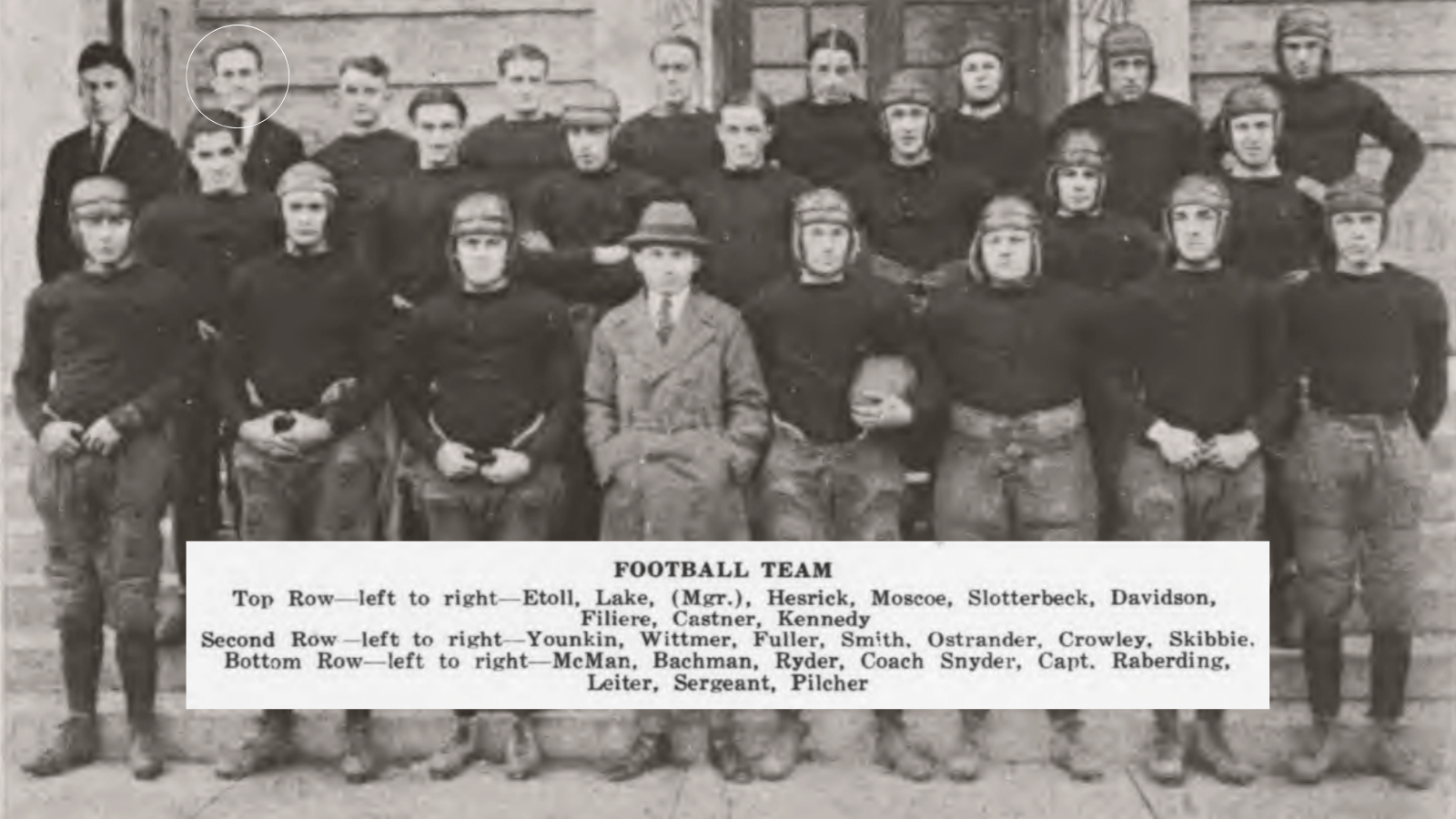 The football game was played at the fairgrounds after the parade arrived there. A Bee Gee News article says about 2,000 people watched the game, with 500 of those arriving with the Toledo team.

The game ended in a 6-6 tie and the report of the game is as follows:

“(BG) Quarterback Hesrick was out of the game with a bad knee. The B.G. score came as a result of Younkin blocking a T.U. punt and Skibbie falling on it as it rolled over the goal line. The whole team showed that fighting spirit so characteristic of B.G.N.C. teams. Toledo U. made her touchdown after covering a B.G. fumble on the ten yard line in the second quarter. … Every Toledo man was right on the job playing a clean, hard game and B.G.N.C. was lucky to have a good share of the ‘breaks.’ On the other hand B.G. was seriously handicapped by not having the services of quarterback Hesrick who is considered by some to be the best passer in the conference.”

Downtown was involved again after the game, when a “big snake dance” wound through the business district. “Whether the team suffers defeat or wins a wonderful victory, the dance and celebration will be held just the same,” planners said earlier.

The snake dance was “led by a 1902 Cadillac chugging away in its ancient dotage” as the crowd processed through the Main Street to the corner, the Bee Gee News noted.

The night of homecoming was “spent in getting acquainted in the college gym., where a good time is assured to all,” planners said. The party at the gymnasium drew about 400 people.

“A great deal of credit for the success of the day should be given to Ivan Lake, president of the Win-One Club. It was Lake who planned this day and engineered it to success,” a Nov. 20, 1922, Bee Gee News article said. 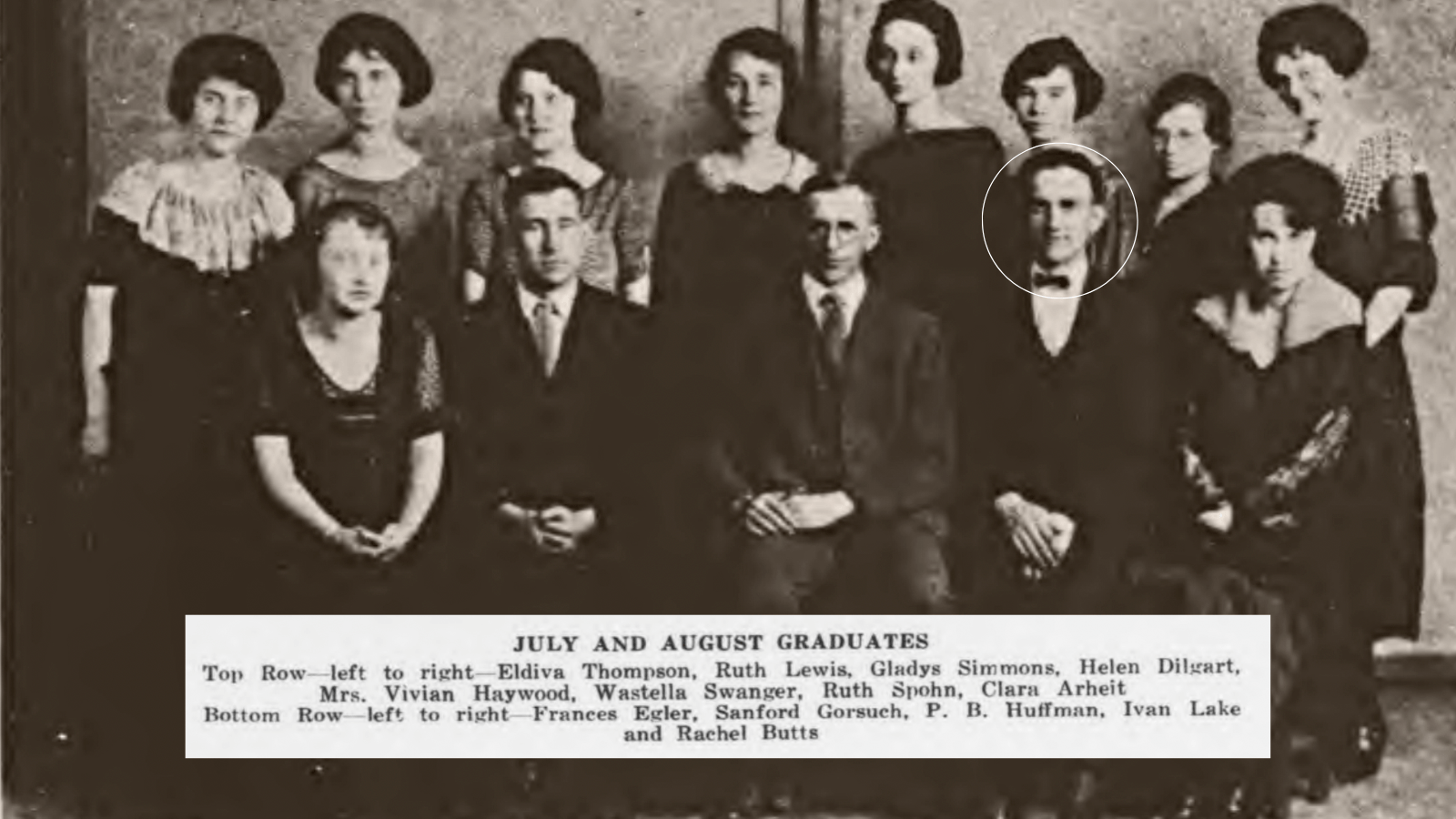 Lake was known as “Mr. B-G” because of his extensive and enthusiastic involvement with and promotion of the University during and after his time in Bowling Green. His nickname “Doc” came from his time at Bowling Green High School. Lake became the trainer for the football team and soon after, it beat Fostoria for the first time in school history.

Lake was an incredibly well-rounded student and he graduated July 30, 1923, with a Bachelor of Science in Education. He won more varsity letters than any non-athlete in University history. Most of his 15 letters were for leading cheers or managing - his only athletic letter was in tennis. In addition to organizing the first homecoming, Lake’s contributions included: 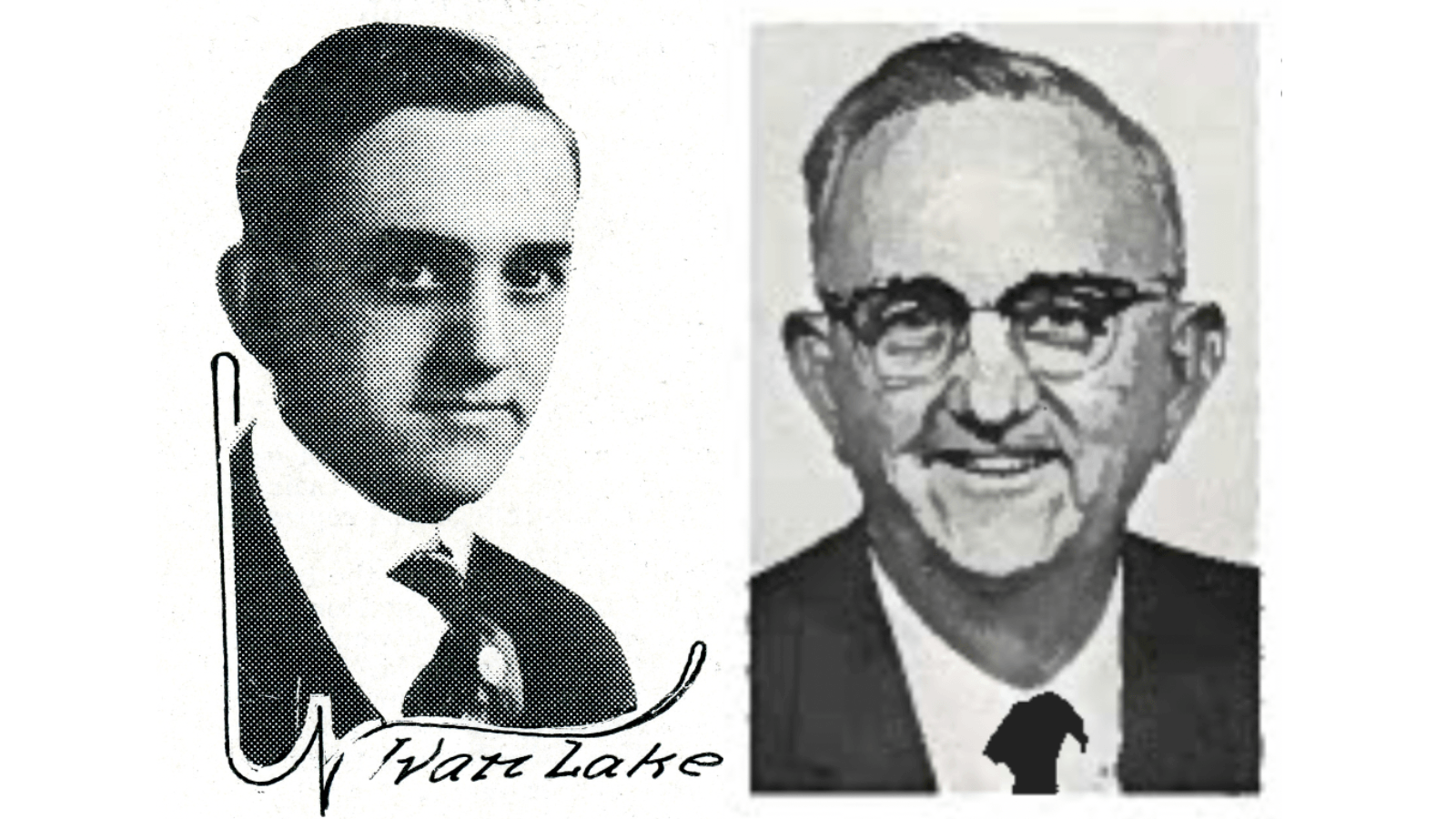 According to University Libraries’ Ivan “Doc” Lake collection, after his graduation, Lake became telegraph editor, sports editor and managing editor for the Bowling Green Sentinel-Tribune, during which he endlessly promoted the University. “A sports enthusiast, he never missed either a home football or basketball game from 1919 when he enrolled in the University until 1953 when he moved from Bowling Green to California,” an article on Lake’s life said.

Lake received the Distinguished Alumnus Award in October 1964 and was inducted into the BGSU Athletic Hall of Fame that same year.

Lake left the Sentinel-Tribune in 1953 to work as a reporter for the San Diego Union in California and eventually became the public information officer for the San Diego County civil defense department. Even during his time on the West Coast, he continued to sing the praises of BGSU and organized and promoted alumni groups and activities in southern California.

Lake remained in California until his death at age 66 on Oct. 26, 1967. He was survived by his wife and three sons, Dennis, Jerry and Larry.