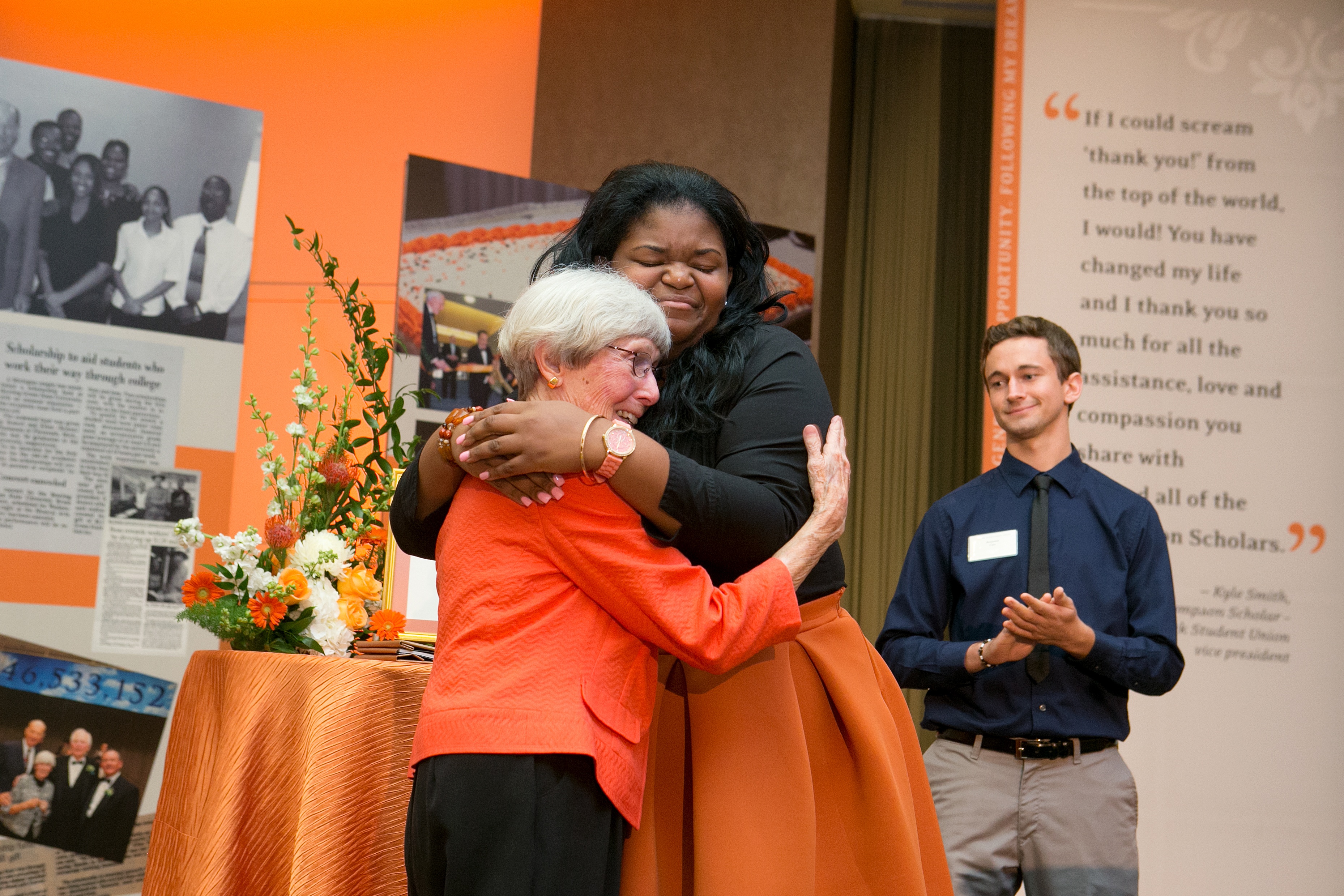 A historic and life-changing gift

Bowling Green State University has received the largest gift in its history from philanthropists Robert and Ellen (Bowen) Thompson to expand their existing scholarship programs.

“We are exceptionally grateful for the continued generosity of Bob and Ellen Thompson, who have been incredible friends and supporters of BGSU for decades,” said President Rodney Rogers. “Their previous support has had immeasurable impact on thousands of BGSU students, and with this unprecedented gift, we will be positioned to achieve our imperative of making a BGSU education accessible and affordable for as many students as possible.”

The Thompsons have previously gifted millions in support of scholarships to BGSU, with a focus since 2014 on students from working families and those with military service. In addition, they established the Thompson Scholarship in the Sidney A. Ribeau President’s Leadership Academy (PLA) for students from the Detroit area who show academic promise. Reinforcing work ethic and helping others, recipients of the Thompson Working Families Scholarship and PLA scholars must also have employment and meet community service requirements.

Scholarships funded by the Thompsons have already impacted more than 1,000 students since the couple’s first gift to BGSU in 1981. However, this new $27 million gift will vastly expand their BGSU scholarship program to hundreds more students annually for years to come.

“One of the most challenging aspects in admissions is working with students who have incredible talent and ability, but limited financial means,” said Cecilia Castellano, BGSU vice president for enrollment management and student outcomes. “These additional scholarships will help many students realize their dreams of a BGSU education and make a tremendous difference in their lives and those of their families.”

The transformative gift to the BGSU Foundation is comprised solely of non-endowed funds and will be put to immediate and full use. As with previous scholarship support, the University must match the $5,000 awarded to each Thompson Working Families scholar annually, dollar for dollar, in addition to meeting other benchmarks, including ensuring that 80% of program participants graduate.

“This demonstration of support is almost unimaginable in a year filled with so many challenges, but it’s a recognition of BGSU’s perseverance and commitment to ensure our students could continue their path to a meaningful and productive life,” Rogers said. “Bob and Ellen’s vote of confidence means so much to us, and we will honor their gifts by enduring in our mission to be a public university for the public good.”

Ellen and Bob met as students at BGSU, earning their degrees in education in 1954 and 1955, respectively. They married and began their careers as teachers before starting a family and embarking on an entrepreneurial journey. They founded and grew several businesses that became known for giving back to their employees and communities.

“Ellen and I have been truly lucky in this world,” Bob Thompson said. “In all the things we’ve been able to do for BGSU, they really pale in comparison to what BGSU has done for us. And our greatest hope is that the students we are able to help with these scholarships can say the same thing in the future – that without BGSU, I wouldn’t be who I am today.”

In addition to their scholarship support, the Thompsons generously gave $3 million in 2000 for the construction of a new student union, which was named in their honor. Last year, in appreciation for their expanded financial commitment for scholarship support and in recognition for their student engagement, BGSU named the historic heart of its campus the Bowen-Thompson Quadrangle.

Bob and Ellen received honorary BGSU doctorates in 2006, and in 2016, the University presented them with the prestigious Lifetime Achievement Award.

“The legacy of the Thompsons at BGSU cannot be overstated,” Rogers said. “They are remarkably humble and caring, as well as loyal to BGSU, and we will forever be grateful for their benevolence and the profound commitment they’ve made to our University and our students.”

The Thompson’s gift came as an exciting conclusion to BGSU’s Changing Lives for the World campaign, which drew to a close on Dec. 31, 2020. The campaign – the largest comprehensive fundraising campaign in BGSU’s history – raised more than $255 million to help move BGSU forward.

“I cannot think of a more fitting end to our historic fundraising campaign,” said Pam Conlin, vice president for University Advancement and president and CEO of the BGSU Foundation. “This extraordinary gift to support students is an emphatic exclamation point on what has already been a philanthropic milestone in BGSU’s history. Now more than ever, this gift truly positions BGSU to change lives for the world.”

To date, Thompson scholarships have supported the education of more than 1,000 students at BGSU. Each scholarship story is one of immeasurable impact.