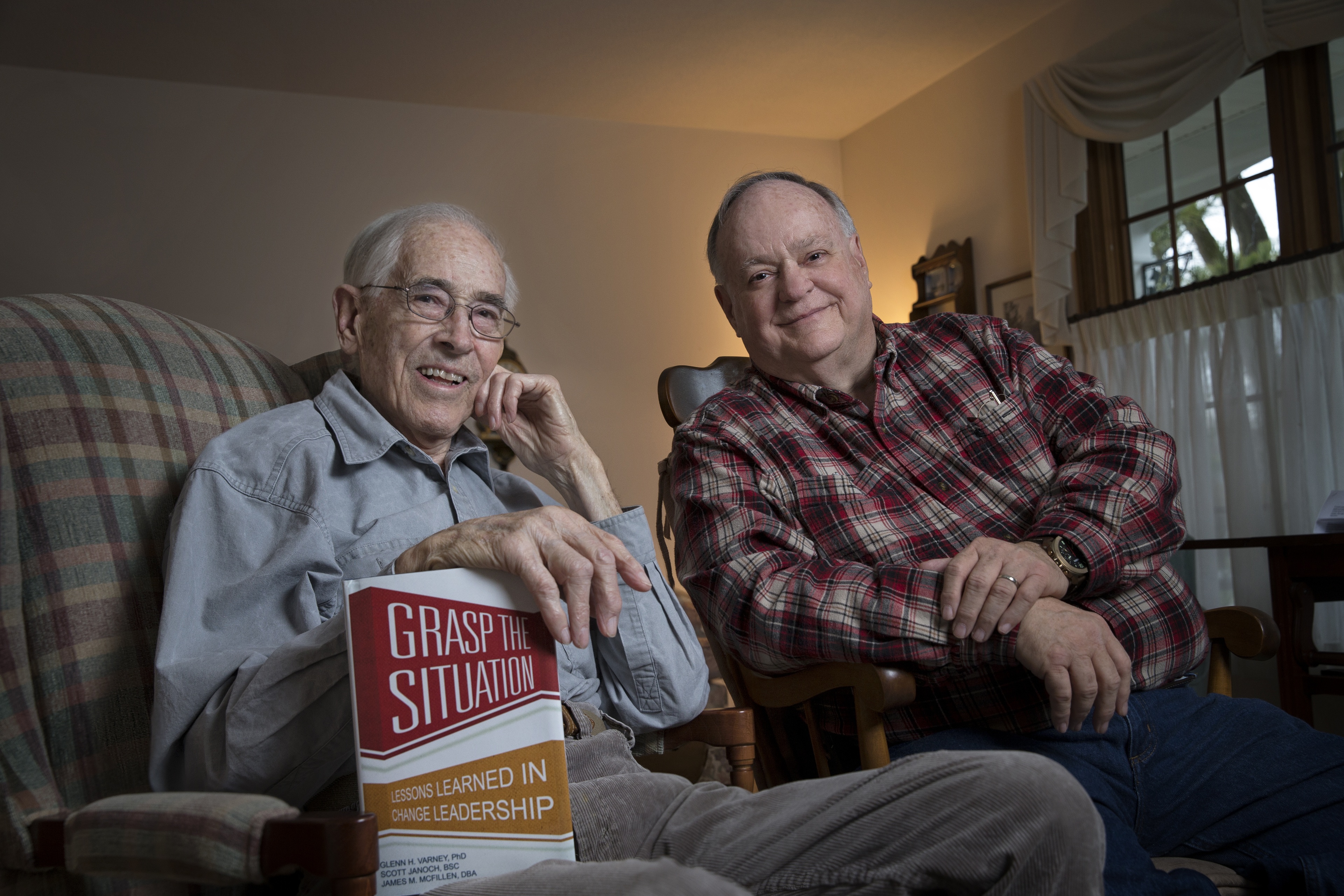 (Left -to-right) Drs. Glenn Varney and James McFillen, both Bowling Green State University professors emeritus of management in the Schmidthorst College of Business Administration, were joined by two other BGSU faculty members, Deborah A. O’Neil and William Balzer, as co-authors of the most frequently read article from BGSU: “Organizational Diagnosis: An Evidence-Based Approach". Varney and McFillen are shown here with the book they co-authored with Scott Janoch: “Grasp the Situation: Lessons Learned in Change Leadership”.

The BGSU executive Master of Organization Development program created by Dr. Varney in the early 1970s continues to thrive. BGSU is proud of its 625 graduates employed in a diverse array of industries and sectors, who are making a positive difference in their organizations and their communities.

Deborah A. O’Neil, current MOD program director and co-author of the Organizational Diagnosis article, noted, “The brand and the legacy of the BGSU MOD program is strong, evidenced by steady enrollment in the program, as well as enrollment in our new Doctorate in Organization Development and Change (DODC) program launched in 2019. We look forward to celebrating the 50th anniversary and beyond of executive education in Organization Development in the Allen W. and Carol M. Schmidthorst College of Business at BGSU."

If there is one thing the world has learned lately, it’s that change is inevitable, and how we manage it is critical.

When it comes to managing change, organizations need to start with diagnosing the problem. People continue to consult a 2012 article by current and retired BGSU faculty members that provides a step-by-step plan to do just that. The article, “Organizational Diagnosis: An Evidence-Based Approach,” has been read more than 27,000 times according to ResearchGate, which recognized it as the most frequently read article from BGSU accessed through its site. Written by Drs. James McFillen, Deborah A. O’Neil, William Balzer and Glenn Varney, it still draws readers from a surprising variety of disciplines.

The origins of the article go back to the early days of the University’s Master of Organization Development (OD) program, begun by Varney in 1974.

“I created the first OD program in the country, probably in the world, here at BGSU,” Varney said. “It was well received, and we had quite a few companies very interested in it. Jim McFillen was a close colleague and when I retired, he was tapped to take it over. Jim wasn’t an OD person, but he wanted to learn about it.”

Bringing that scientific mindset to the program sparked the work that resulted in the Journal of Change Management article.

“I had not done anything with the organization development program because, frankly, I was suspicious of it,” McFillen said. “I was at home working on my sabbatical project when I received a call from the department chair telling me I needed to take over the OD program. I wasn’t thrilled.”

But, once the die was cast, McFillen embraced his new role and was determined to bring a new perspective to the discipline.

“I contacted Glenn and asked how to prepare to take over this program,” McFillen said. “He recommended six books that were all written by the very hardcore organizational behavior people that I was familiar with from my doctoral program. I decided that if I was going to be involved, it needed to be a scientifically based, research-driven program. Over time, I reworked the curriculum to give it a more behavioral science orientation to explain how organizations function and how you could change them.”

While he was making the program a more research-based degree, McFillen realized there was a vital piece missing — the diagnostic process of how to determine what is going on within an organization. He said that the OD literature offered a lot of information about how to fix problems, but nothing that explained the process of diagnosing what the problem was in the first place.

The colleagues reviewed the disciplines that used a diagnostic process to analyze problems and boiled it down to engineering and medicine. Although engineering uses the scientific method in diagnosing issues, there is one variable they don’t need to account for — human behavior. Consequently, they concluded that the medical diagnosis model was better suited to organization development.

“The article continually finds a new audience,” Varney said. “It consistently has 150-250 reads a week from all over the world. Jim is the researcher and I was the practitioner, so we made a great team. We used technology from other fields like medicine and applied it to organizational change, which is the key that makes it so interesting to people around the world — how do you apply the scientific process to make change in organizations?”

“It’s been funny to watch how interest in it continues to grow,” McFillen said. “I think it fills a void, as far as I know there still isn’t anyone else taking this approach.”

“If you are going to make a change in an organization, you need to use a very systematic way of doing it,” Varney said. “Otherwise, it will backfire on you every single time. Organizations are going through tremendous change these days, and that’s why I think they are still reading our article now.”