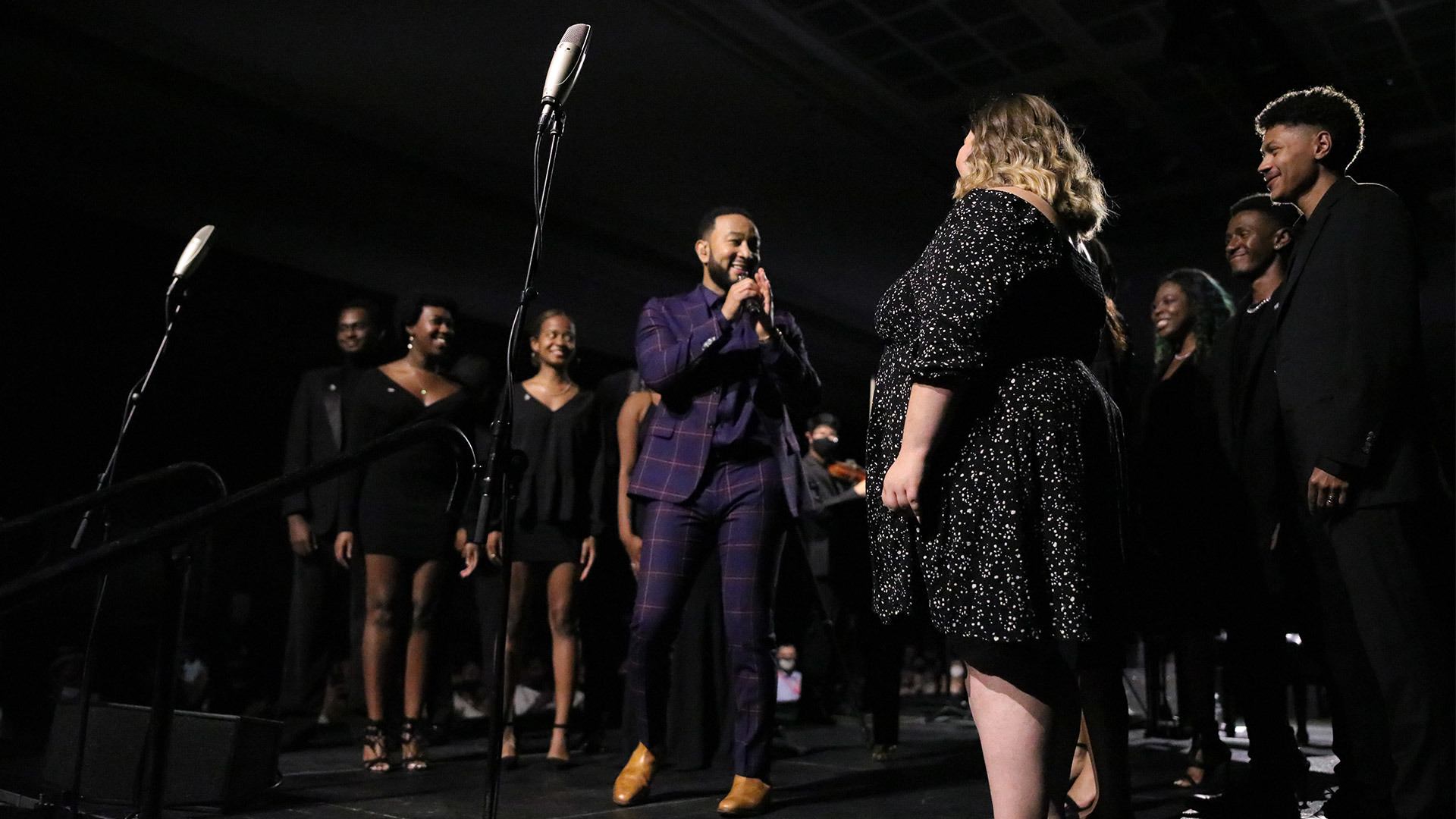 Then, Johnson, director of Voices at BGSU, received a phone call from the student organization’s advisor, Lakeshia Dowlen, about a once-in-a-lifetime opportunity.

Did Voices want to back up 12-time Grammy Award-winning artist superstar John Legend at a private concert at the Toledo Museum of Art?

“Yes, absolutely, I couldn’t say yes fast enough,” said Johnson, a BGSU senior majoring in finance with a specialization in accounting in the Allen W. and Carol M. Schmidthorst College of Business.

Johnson and 11 classmates backed up Legend on his final song, ‘Glory,” in the art museum’s Great Gallery on Oct. 22. Legend performed several of his popular songs in front of an intimate audience surrounded by paintings from the Baroque gallery. 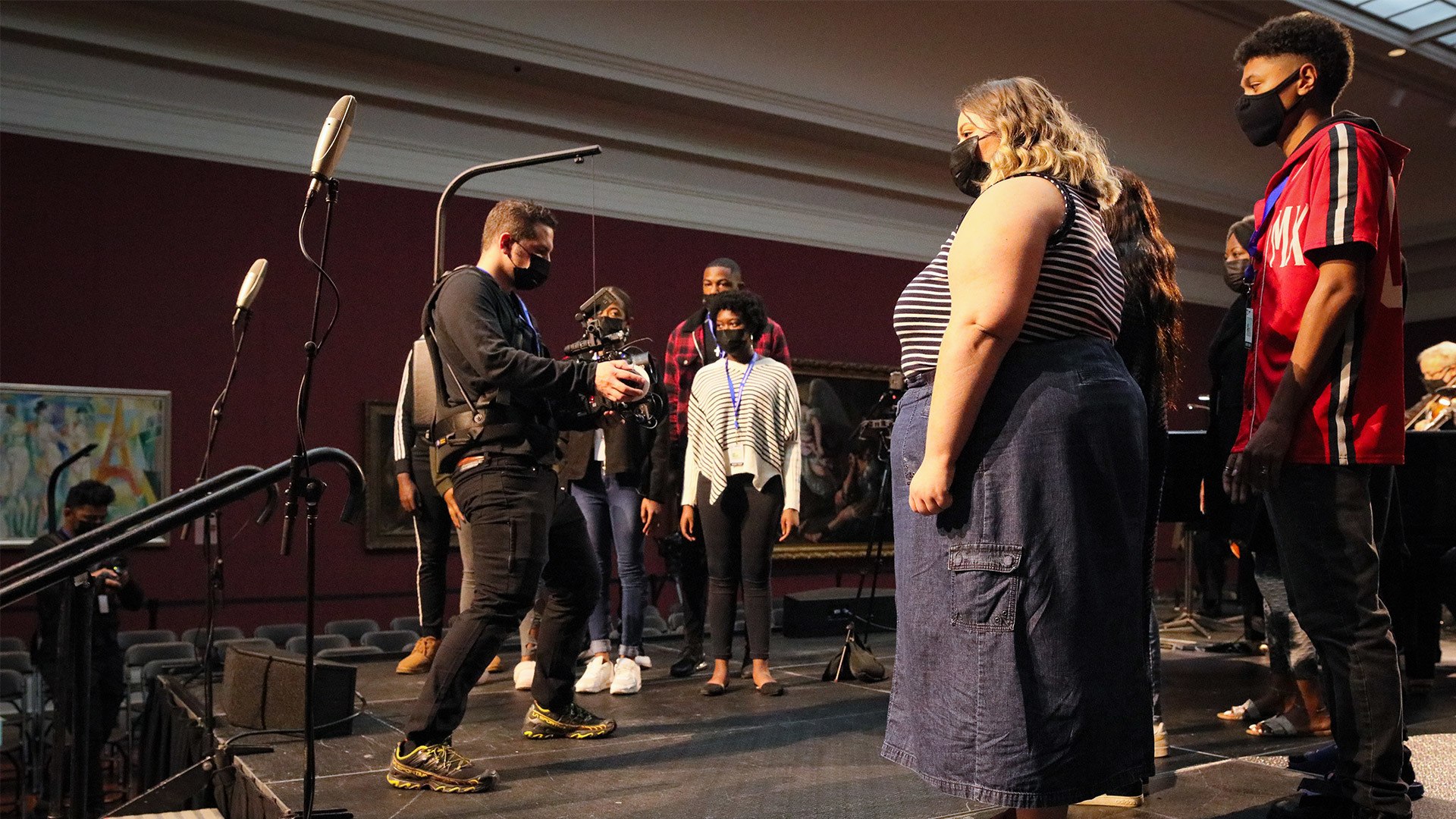 After the initial phone call, Johnson said the group had two weeks to practice. Plus, the singers already had passed COVID protocols that were required for the event.

“We were only allowed to perform if we were vaccinated," he said. "That way, everyone was safe."

Johnson and his classmates didn’t get to meet Legend prior to singing with him, but they met with members of his family upon their arrival to the museum. 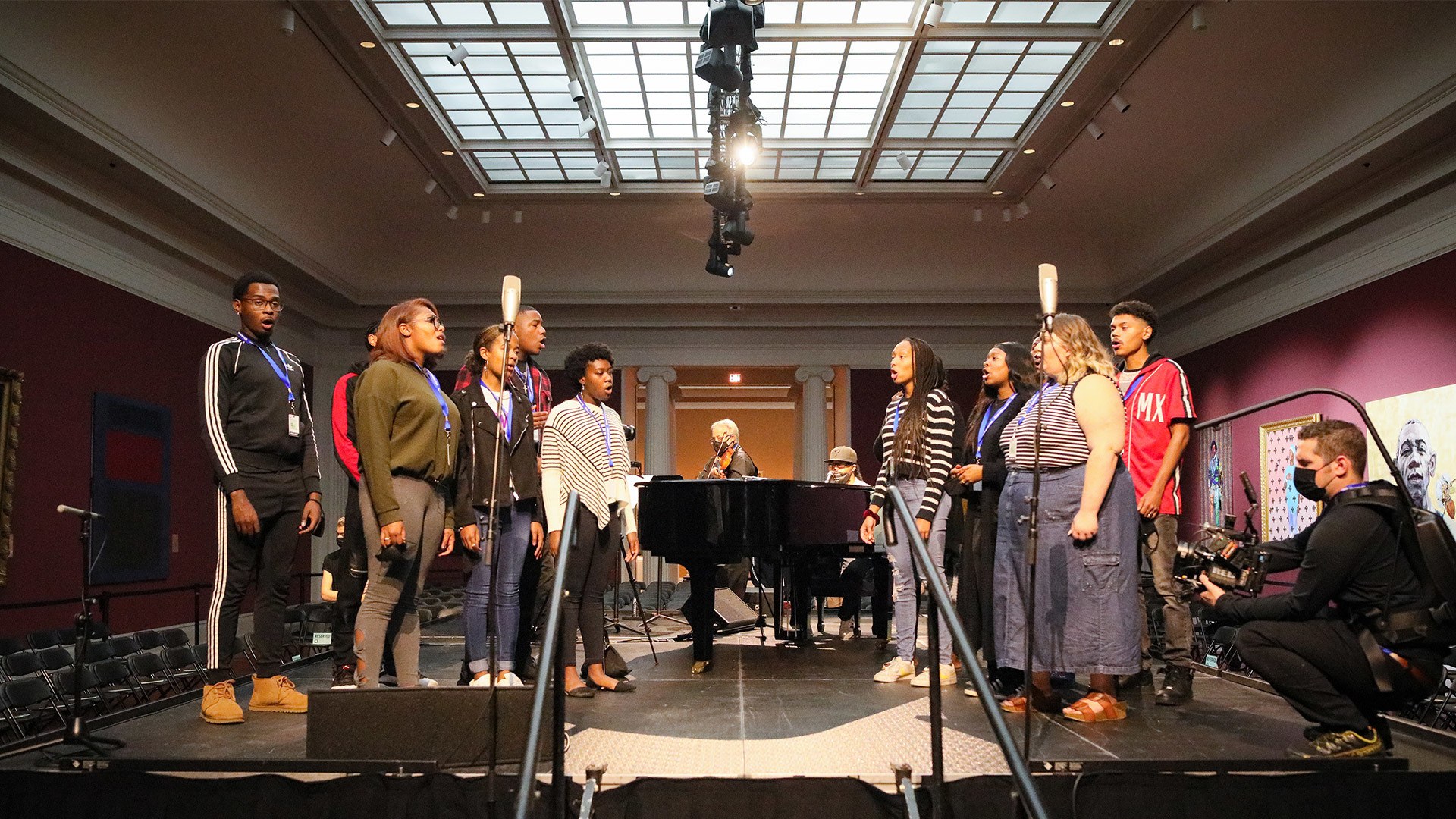 “When we got there on Friday, we basically were taken to our green room where we got ready,” he said. “Then we had the sound check. We met and spoke with John Legend’s brother and his mother and father. During the sound check, a lot of different people were there, and we were kind of nervous. They gave us pointers and then we were able to go back to our room and continue to practice.”

Finally, Legend introduced them as they came on stage for the final performance of the evening.

Johnson said the event was a surreal experience. 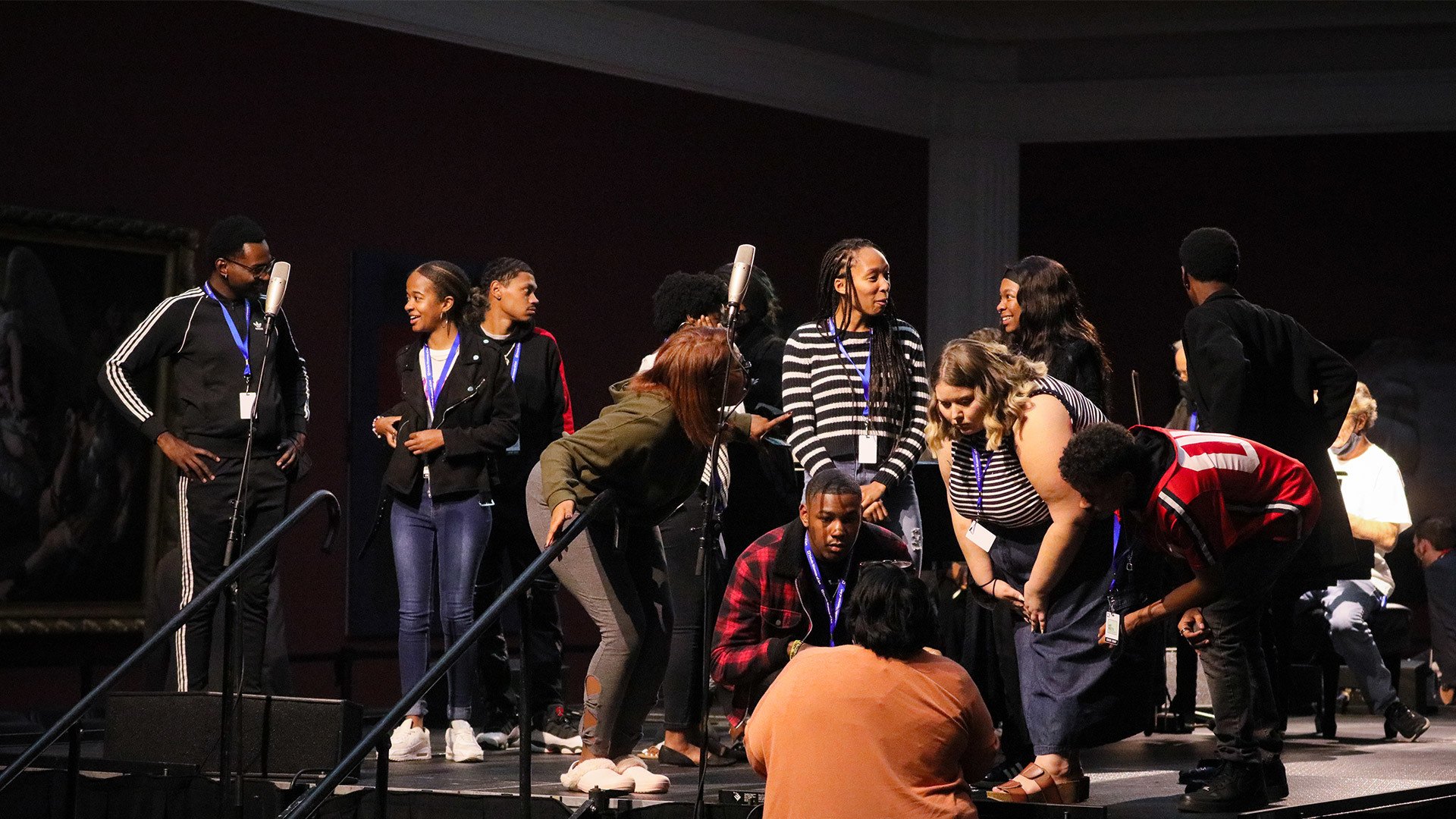 “A lot of us were nervous at first, and I told them, ‘We can't be nervous while performing. John Legend doesn't want nervous singers — he wants the best of the best singers.’ I was trying to get my singers to feel confident — this was an honor; they chose us for a reason. ‘We are the Voices at BGSU, and they chose us. So, show off your voices; don't be scared. Take in the moment — it's a once-in-a-lifetime moment.’ 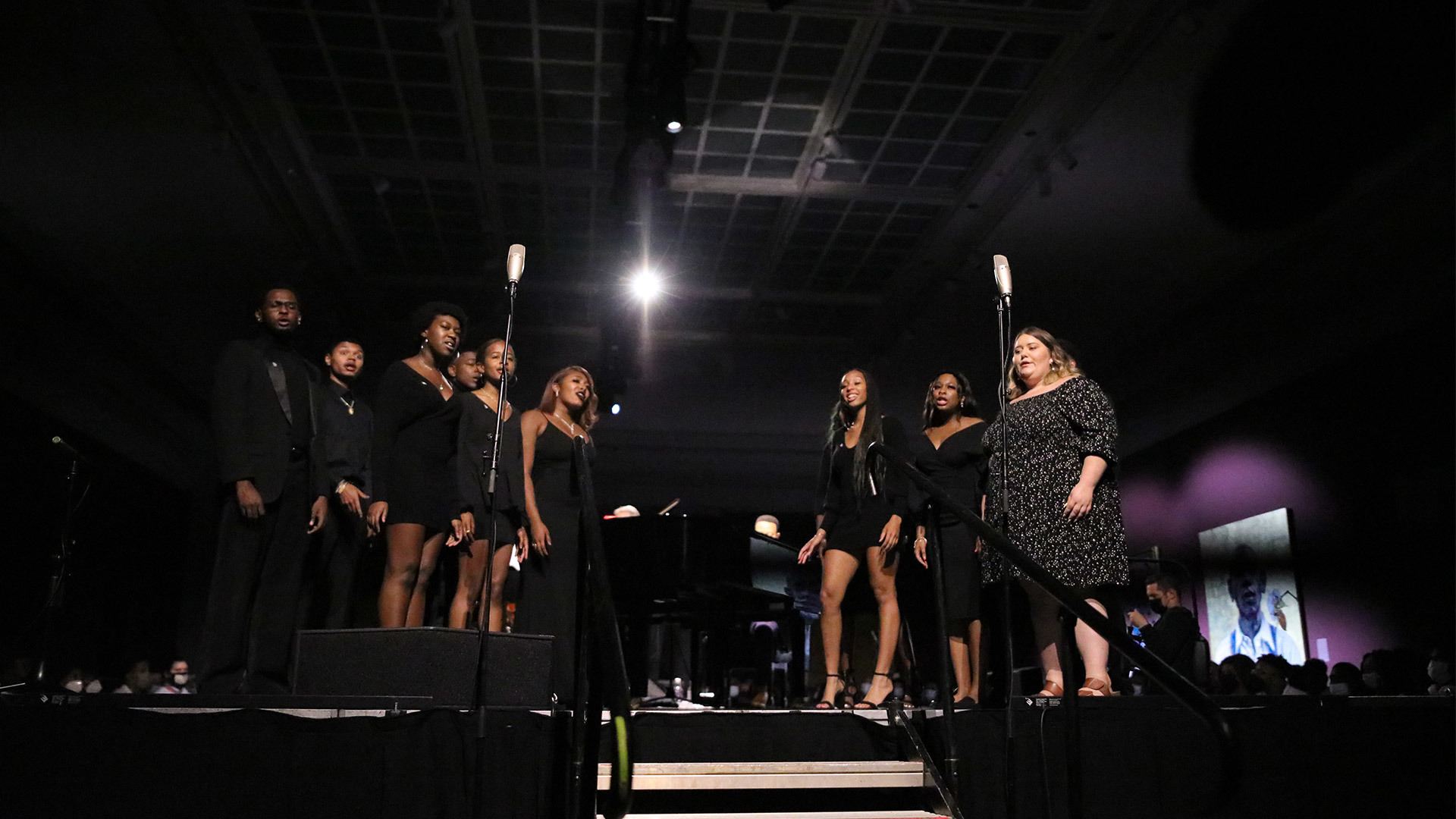 “I definitely feel like we lived up to the moment.”

Such an unforgettable opportunity at the @ToledoMuseum as @TheVoicesatBG performed with @JohnLegend last night! So proud of these creative and talented @BGSU students. pic.twitter.com/jKDq99Bak1

“BGSU is so proud of The Voices at BG for their talented performance with John Legend,” BGSU President Rodney K. Rogers said. “We appreciate the partnership with the Toledo Museum of Art, which provided this unforgettable opportunity. Our students continue to drive the cultural vitality of our region, state and beyond.”

Johnson said he always thought he was a “sing-in-the-shower type of guy,” until he auditioned for a competition and won at Westerville North High School in suburban Columbus. 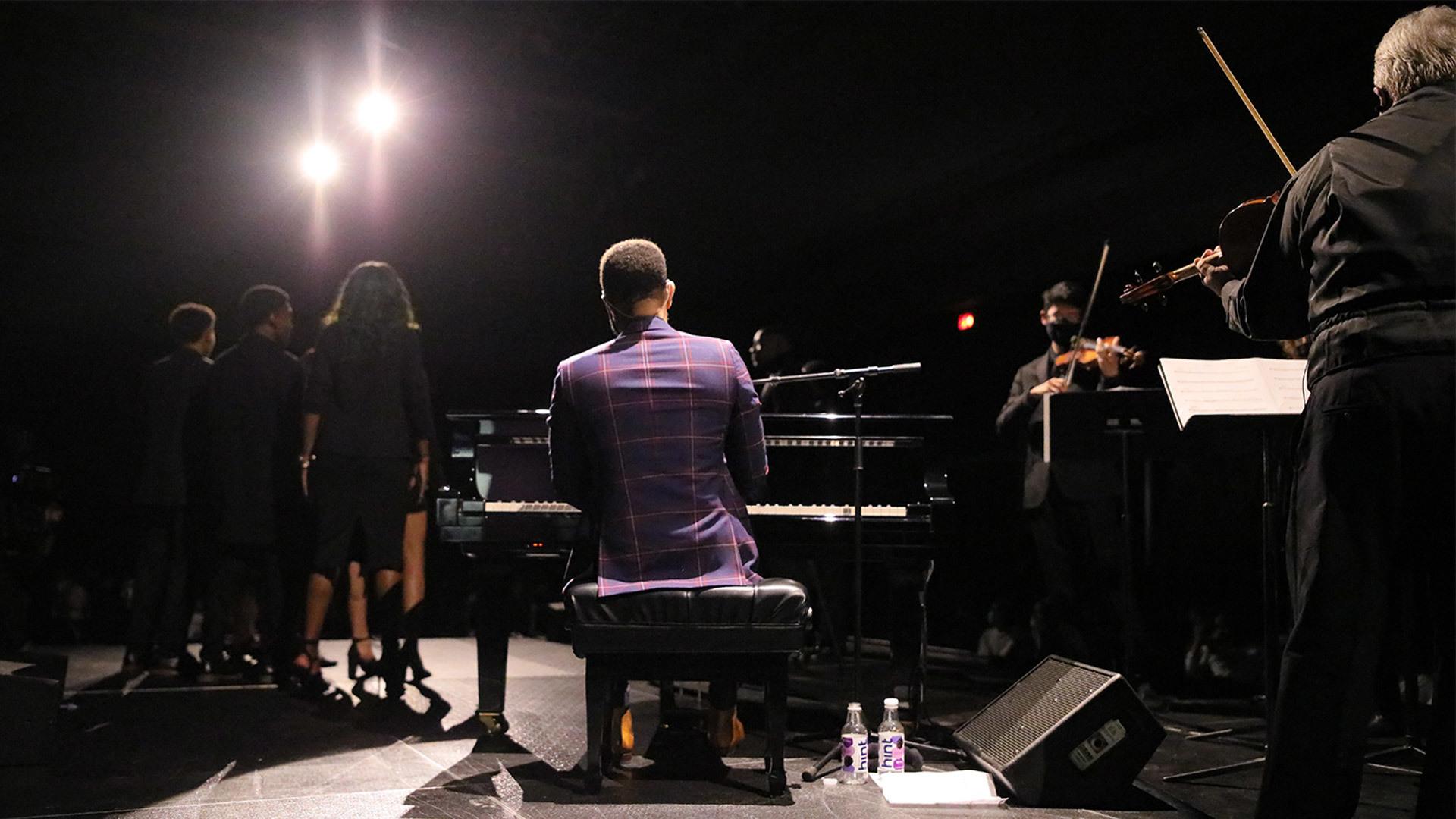 When I came to BGSU, my mindset was to get involved,” he said — and he certainly has. Johnson is vice president of Chi Alpha Epsilon National Honors Society and Men’s Club Volleyball; he’s involved in the TRIO programs, a student desk manager of Offenhauer Towers and the treasure of Alpha Phi Alpha Fraternity Inc.

He’s also involved in the Becca Organization, which supports people affected by the opioid epidemic.

“That way, I feel like I can say I had a successful college career," Johnson said.

The totality of his college career at BGSU also led to something else: Making his mother proud.

“My mother was like, ‘Just when you do something to impress me or make me proud, you do something else to make me even more proud,’” he said. “That was very heartwarming for me to hear that: I'm continuing to make my mother proud. That's the reason that I came to BGSU.”