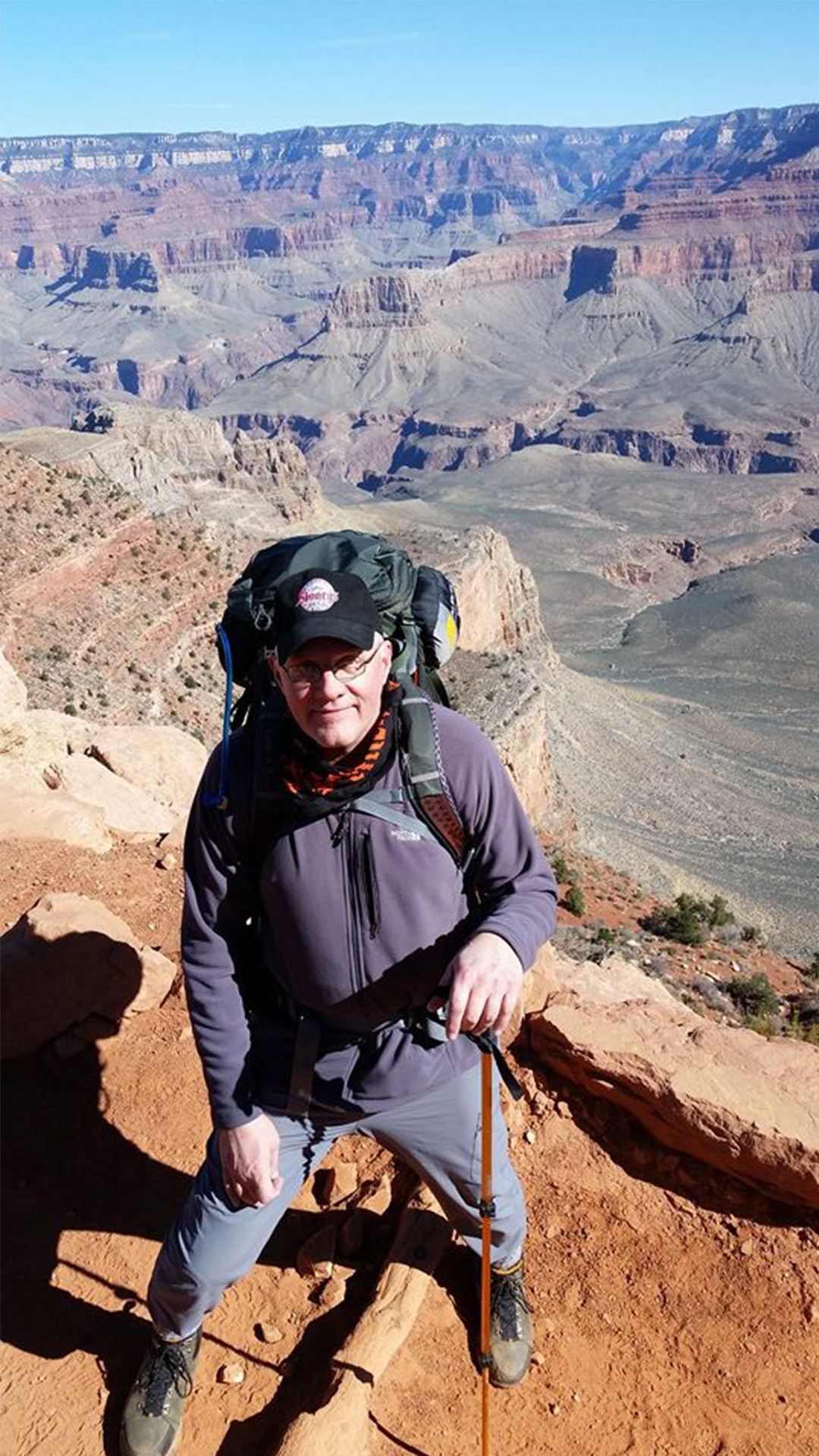 For Kirk Stonebrook, returning to Bowling Green State University to finish earning his bachelor’s degree has been a lifelong goal.

The avid hiker, entrepreneur and father of four enrolled in the 100% online BGSU eCampus program this fall with the goal of completing the undergraduate degree he started in the 1970s. He returned to the classroom armed with decades of life experiences, a variety of corporate involvement and a different mindset when it comes to tackling challenges.

Stonebrook started at BGSU in the fall of 1975 to pursue a degree in business administration — selling and sales management. He immediately fell in love with the campus and the college experience, even meeting Jenny, his future wife.

“I loved it all. It was the perfect-sized campus for me,” he said. “I met my Falcon Flame there, loved downtown, became a Sig Ep with lifelong friendships, was very involved with intramurals, and had an early morning job flipping pancakes for extra cash. There are too many more memories to count.”

Life intervened, causing Stonebrook and Jenny to leave BGSU in spring of 1977. Her mother had died their freshman year and the couple decided to keep a closer eye on her father. Stonebrook also had the opportunity to go into the family business, K-J Fasteners, that his father started in 1975 in northeast Ohio.

“He needed help, but did not want me to quit college,” Stonebrook said, recalling that he worked his way up, starting with shipping and receiving. “When I wanted to hit the road and sell for the company, he put me out there on straight commission with a gas card and calling cards.”

Within five years, Stonebrook was a top seller. By his early 30s, the company took off.

“I became vice president by 35 and started running the company as president at 39," he said.

Meanwhile, Jenny Stonebrook pursued career goals of her own, becoming a Jazzercise instructor in her 20s, earning a paralegal degree in her 30s, an urban studies degree in her 40s, and a master’s in palliative care in her 50s.

When asked how his time at BGSU prepared him for his career, Stonebrook said it was less academic — after all, he left just when his classes were getting into the heart of his major — but more in the way of being exposed to diversity, including that of race, socioeconomic status, culture and thought.

“I learned about serious study habits, a love for economics and juggling way more,” Stonebrooks said. “It was a chance to recreate the person people thought they knew for my first 18 years on the planet.”

Back to the Beginning

When it came time to enroll in college again, there was never any question that it would be with BGSU. Partly due to the COVID-19 pandemic and partly because he lives in the Cleveland area, Stonebrook chose BGSU’s eCampus program to pursue a Bachelor of Science in management and technology.

Though his career had seen successes both inside and outside the family business, Stonebrook had a lifelong regret that he never completed his college education.

“It’s just something I have to do,” he said. “Several of these classes will expand my skill sets for current company needs and goals, but mostly this is a personal challenge. I will stretch my brain and stay relevant. After I retire and sell the business — right around when I graduate, hopefully — I may consult or help one of my kids’ start-ups.”

“This isn’t something I need to do professionally, but it’s something I want to do personally,” he added. “I jumped out of a plane at age 55, I’ve hiked the Grand Canyon and I’m going back to college at age 65.”

When he was in his mid-40s, Stonebrook had what he calls a “mid-life moment,” realizing that, aside from a brief stint in fast food service as a freshman in high school, his entire career had been spent in the industrial sector at K-J Fasteners.

“I actually told my dad that I was leaving to challenge myself outside the family business,” he said. “My resume was impressive, but pretty much in a silo. With no college degree, I had to forge my own path.”

“I was actually at the top of my game as I approached 60, juggling all these awesome hats with great pride,” Stonebrook said. “But over the last 10 years, my mom passed suddenly, I had a heart attack and knee replacement, my dad’s dementia accelerated and the company partner wanted to retire. So, I came back to run the business and possibly prep it for sale as I near 70 and K-J reaches 50.”