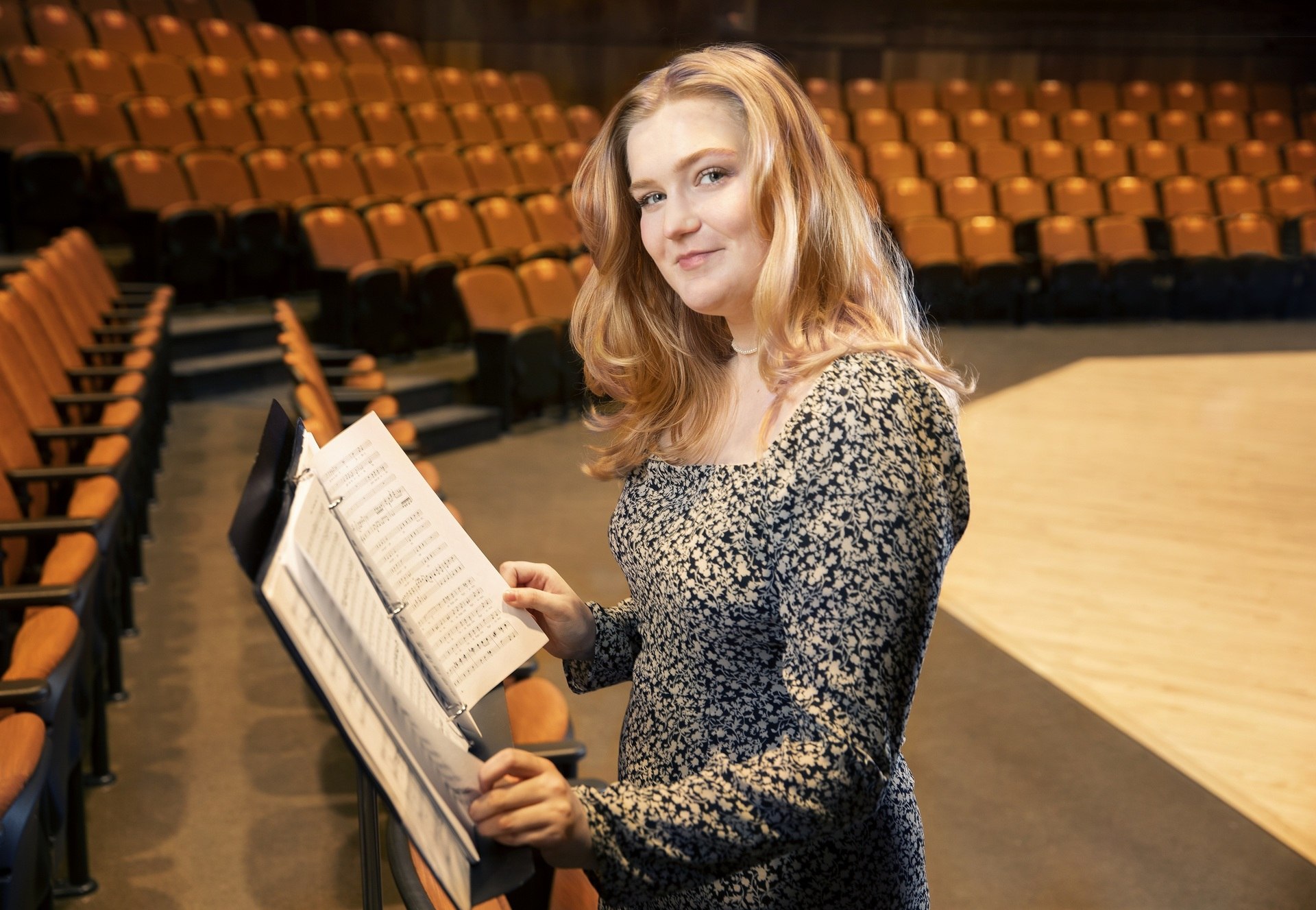 Class of 2021: Leah Tracy leaves a piece of herself behind at BGSU

As Leah Tracy prepares to leave her home for the last four years, she is leaving a piece of herself at Bowling Green State University.

Tracy’s composition, “Remember, Woman” is now the official anthem of the BGSU Women’s Chorus. She has earned a Bachelor of Music from the College of Musical Arts, majoring in music composition.

In Fall 2018, Tracy was approached by Dr. Emily Pence Brown, assistant professor of music education, and officers of the Women’s Chorus with the idea of writing an anthem that demonstrated strength and power. The Men’s Chorus long ago adopted Edvard Grieg’s “Brothers, Sing On!” and has been sung for decades.

“When I found the text ‘Remember, Woman’ by the living poet Reese Leyva, I knew this was the perfect text,” Tracy said. “Aesthetically, I was aiming for a driving piece that could be marched to, if desired. The line from the poem that stuck out the most to me was ‘you were born with the fire of queens and conquerors, warrioress blood you bleed,’ and I used this line to open the piece.”

She said the anthem, which is a shorter version of her composition, premiered live in Spring 2019, but the ensemble was not able to premier the full-version before the COVID-19 lockdown.

“Dr. Brown and I decided that performing the full version as a virtual choir would be the perfect project for the 2020-21 academic year,” Tracy said. “The recording of ‘Remember, Woman’ premiered virtually on March 8 to coincide with International Women’s Day. I also chose the piece to close my virtual senior recital, as it is a piece that I am incredibly proud of and thankful for.

“I am incredibly honored that I was chosen for this project. It has been my favorite project during my time here and is so special to me.”

Tracy attended Riverdale High School in Mount Blanchard, Ohio, near Findlay, and when researching music programs, she chose BGSU because she was impressed with the CMA faculty and the opportunities that would be available to her as a music student at the University.

“I was interested in a school that would allow me to explore many different areas as a musician,” she said. “It’s very important as a musician to have opportunities to collaborate with other musicians, and that’s something that is certainly emphasized in the College of Musical Arts. I was able to fill my schedule with music classes that interest me, even if they were outside of my major. The faculty has been absolutely amazing. I feel like every single one of my professors really wants to see me succeed.”

Tracy was one of four winners of Chicago a cappella’s “HerVoice” competition for emerging women composers, announced on May 5. A partnership with the Kansas City Chorale, the competition resulted in 82 submitted works from 69 composers representing 13 countries and 22 U.S. states. Tracy’s composition “sing to us, cedars,” with text by Emily Pauline Johnson, will be workshopped and performed by the Kansas City Chorale, and she will work with mentor composer Chen Yi. Tracy also received a $500 cash award.

Tracy’s experience has helped prepare her for the next steps in her educational and professional journeys.

“My time here at BGSU has allowed me to see which areas of music were the most interesting to me and narrow down exactly what I want to do with my career moving forward,” she said. “I also found that my classes really challenged me and have prepared me to further my studies when the time comes.”

“Leah has contributed to the College of Musical Arts in so many ways during her music degree,” said Dr. William Mathis, dean for the College of Musical Arts. “She is a talented multi-instrument performer, accomplished composer and student leader. It is inspiring to see a student take full advantage of all the opportunities provided through our programs and curriculum but also to see a student give so much back to the community. Leah is that kind of student.”

Tracy’s experiences as a composer and a performer have overlapped in a lot of ways.

“I’ve really enjoyed how my performances have influenced my compositions and vice versa,” she said. “I’ve been able to perform my colleagues’ works, and my colleagues have performed my works, and I’ve really appreciated all the feedback I’ve received in both areas because of these experiences. I’ve had so many opportunities to have my music performed or premier brand-new works at the Student Composers Forums and through an organization called Praecepta, which is the student organization for composers and performers of contemporary music.

“One of my favorite weekends of the year is an event called 24x24, where composers and performers are paired randomly,” Tracy said. “The composer has 24 hours to write a piece, and the performer has 24 hours to prepare it for a concert on a Sunday. The past two years, I participated as a composer and as a performer, and it is so fun to just immerse yourself in a project like that for an entire 48 hours.

“I also sang in the student-composed MicroOperas last year, where we performed an original new opera written by another composition student. That was definitely one of my favorite experiences during my time here, and I felt like I learned so much and was able to implement new creative ideas into my writing and grow as a performer as well.”

Tracy is grateful that the University was able to virtually host the Conrad Art Song Competition this year. It is a collaborative competition in that the adjudicators are not just judging the vocalist, but they also are judging the pianist’s playing and how the pair of performers are working together as a team.

“I am beyond grateful that I was able to compete with one of my very good friends this year,” she said. “His name is Steven Naylor and he is a fourth-year undergraduate student, double-majoring in piano performance and composition. We selected a repertoire that we thought would really show off both of our strengths for this competition. We placed second in the undergraduate division, and personally this meant so much for me to receive recognition for the hard work I have put in over the years to come out of my shell as a performer. I’d like to thank my voice teacher, professor Myra Merritt-Grant. She has always encouraged me and helped grow my confidence as a singer.”

Tracy said there are so many faculty members who have helped her along her way, but she especially would like to highlight a few of them.

“I would like to thank Dr. Elainie Lillios, my composition teacher for my final three semesters, and Dr. Richard Schnipke, director of the Collegiate Chorale,” Tracy said. “Each of them, plus Myra Merritt-Grant, has helped me find new ways to be creative, find my passions as a composer and musician, and grow my confidence enormously since I first arrived at BGSU. I am so grateful for their guidance.”

Looking ahead, Tracy would like to pursue a master’s degree in choral conducting but would like to gain some experience in that area.

“I really want to spend the next few years building up my portfolio as a composer, specifically writing more choral and vocal music, since that is what interests me the most,” she said. “My dream job would certainly be directing a high-level choir at the college or professional level.

Tracy also had some advice for prospective students, who are considering BGSU’s College of Musical Arts.

“BGSU has a great track record for the musicians that come out of this program,” she said. “When I sang at the Ohio Music Educator Association 2020 Conference with the Collegiate Chorale, I met so many alumni that had strong careers as teachers and musicians, and all of them are so proud of their roots as BGSU students. I am so grateful to have such a strong network of musicians already out in the world making music. I also think that, because BGSU has allowed me to really explore many areas as a musician, I am more employable than someone who was forced to stay within their specialization.

“I have experience in early music, jazz, contemporary opera, organ, piano, music technology, arranging and so much more. Allowing students to really explore their interests and become well-rounded musicians is not only much more fulfilling, it’s much more practical going into the ever-competitive world of professional musicians.”