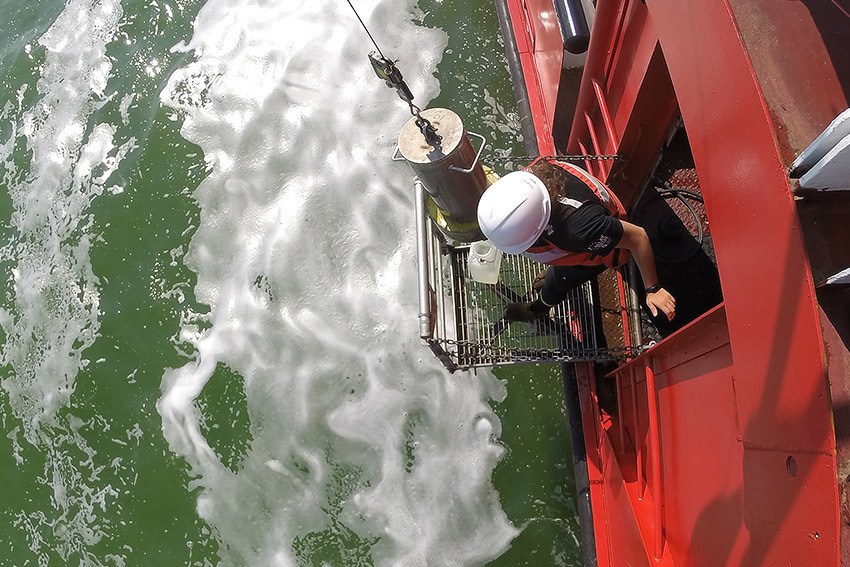 A 2019 study by Bowling Green State University researchers discovered a novel virus that could substantiate a hypothesis that viral infections led to a toxin release in the 2014 Toledo water crisis.

Katelyn McKindles, a doctoral student in biology and the lead author of a recently published paper about the discovery, said they found a new cyanophage, viruses that infect blue-green algae, which could be linked to toxic algal blooms. The team, headed by Dr. George Bullerjahn, director of the Great Lakes Center for Fresh Waters and Human Health and a Distinguished Research Professor of biological sciences, was excited to find the new virus and to further the research about cyanobacterial harmful algal blooms (cHABs) and water quality.

What started as a call from Andrew McClure, superintendent of the Collins Park Water Treatment Plant in Toledo, turned into a short-notice study and a continued collaboration with a public partner, Bullerjahn said. McClure reported they were seeing a spike in dissolved microcystin toxins in the state-mandated sampling.

“We had previously proposed that the bloom that caused the 2014 Toledo water crisis involved a viral attack on the bloom. It resulted in a pulse of toxins that they were not expecting and which overwhelmed the system,” Bullerjahn said. “So that was something they knew to look for at the water treatment plant.”

That same afternoon the BGSU team started collecting samples. Everyone in the lab jumped in quickly to help, according to McKindles. “The effort and coordination that the whole lab displayed after the call was incredible. I always had a willing second set of hands in both the graduate and undergraduate-level students, which included tasks for sampling and for processing the samples in the lab.”

“It was a hectic time in the lab because we were handling the daily water treatment plant samples alongside our normal biweekly monitoring of the cHABs in Sandusky Bay,” McKindles said. Undergraduate student MaKayla Manes and graduate student Jay DeMarco were credited for making the process work.

Through the sampling and analysis, the team identified further evidence that viral activity in western Lake Erie plays a significant role in transformation of microcystins from the particulate to the dissolved state.

“In a typical bloom, over 95 percent of the toxins are contained within the cells. The water treatment process filters out the cells, which gets rid of most of the toxin and there is no problem,” Bullerjahn said. “With lysis, when the cell walls or membranes are ruptured, new toxins are released that get around the filtration steps. There were new viruses linked to this event.”

Ultimately, the Great Lakes Center is looking to develop an assay which can determine if there is a lot of viral activity happening.

“The research could have important implications for public water facilities,” Bullerjahn said. An assay could be another tool in the water treatment plant’s toolbox to help them prevent toxins from infiltrating water systems.

“Getting to establish a working relationship with the water plant and feel like the research we are doing is directly helping the community was remarkable,” McKindles said.

The results of the study were published in the Applied and Environmental Microbiology journal of the American Society of Microbiology. In addition to McKindles and Bullerjahn, co-authors on the paper include Manes, DeMarco, McClure, and Professors R. Michael McKay and Timothy W. Davis.