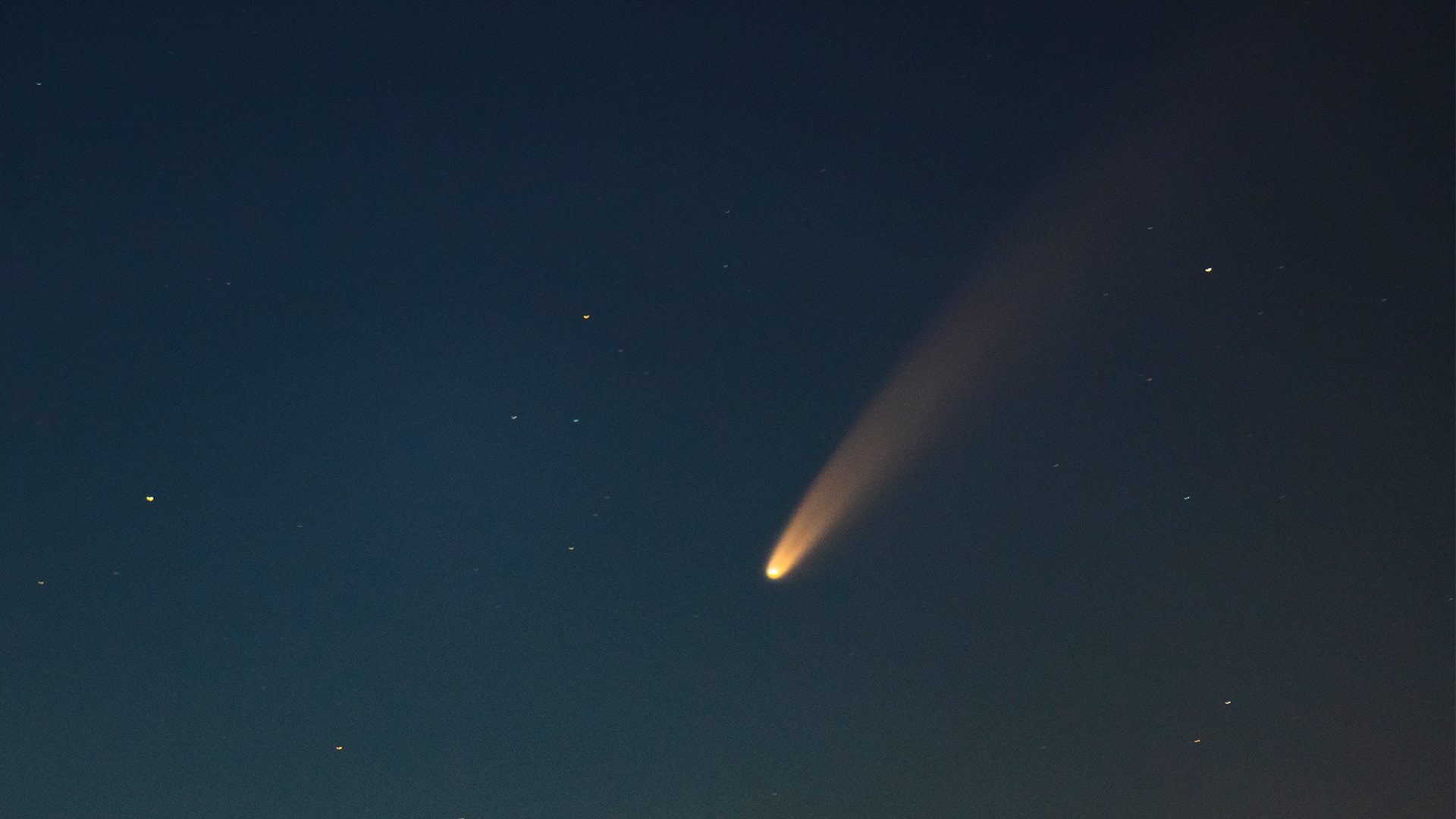 Get a glimpse of Comet NEOWISE while you still can

If you haven’t yet seen Comet NEOWISE in the sky, you’re running out of chances.

The comet was discovered March 27 by NASA’s Near-Earth Object Wide-field Infrared Survey Explorer (NEOWISE) mission. It will reach its apex in the Northern Hemisphere sky July 23 and then begin to dissipate into the depths of space and not be seen again by Earth’s inhabitants for 6,800 years.

Comet NEOWISE isn’t easily seen with the naked eye, but has been visible by binoculars for the past few weeks in a clear sky. It can be seen looking northwest below the Big Dipper starting about an hour after sunset.

Viewing from the Bowling Green area can be difficult

For viewers in the Bowling Green area, however, Comet NEOWISE can be difficult to view.

“In B.G., we have a hard time seeing the comet because it’s in the north, so light pollution from the Toledo area makes it more difficult to see,” said Dr. Dale W. Smith, professor in the Department of Physics and Astronomy and director of BGSU Planetarium. “If you’re outside of town in a place with a fairly dark northern sky, you would have a better chance to see Comet NEOWISE."

A comet, unlike a planet or asteroids, can be difficult to discover because of the shape of its orbit.

“Comets are typically in cigar-shaped orbits going very far out where we can’t see them and coming in closer to Earth where they become visible,” Smith said. “That’s why in this age we are still finding new things like Comet NEOWISE.”

By contrast, Smith said, Halley’s Comet’s cigar-shaped orbit goes out about as far as Neptune and actually comes into Mercury’s orbit.

“The Comet Halley is about at its far point now,” he said. “It was here in 1986 and comes back in 2061. Instruments can detect Halley all the way around its orbit, even out to its far point; whereas NEOWISE is coming in from much greater distances, so that’s why we haven’t seen it before.”

A life spent looking in the sky

Astronomy has been a lifelong passion for Smith, who has been with BGSU Planetarium since 1983. He fell in love with astronomy when he was in third grade.

“The sky is part of our heritage,” Smith said. “We have to travel far to see something as beautiful as the Grand Canyon, but the sky is in our own backyards. You don’t have to go a long way to see it. Astronomy is something I hope people find fascinating. I really hope they do.”

It’s hard for Comet NEOWISE to generate as much public interest as Halley’s Comet, he said, because it can’t be easily seen without the aid of binoculars or a telescope but also because no one alive now — or anytime soon — will see it again.

“I don’t think any of us are going to hang out for its return in 6,800 years,” Smith said with a laugh. “Some readers of this story will be able to see the return of Halley’s Comet in 2061, but I’ll be long gone when it comes back.

“When Halley was here in ’86, the planetarium had just opened and we had a lot of people coming to our comet Halley show. When I saw people in the crowd who looked like they were in their 80s, I would ask if anyone had seen Halley when it was here in 1910 and some hands would inevitably would raise. So, the cool thing with Halley is it returns every 76 years. if you’re born at the right time, you can see it twice. It connects the generations in a way that Comet NEOWISE doesn’t.”