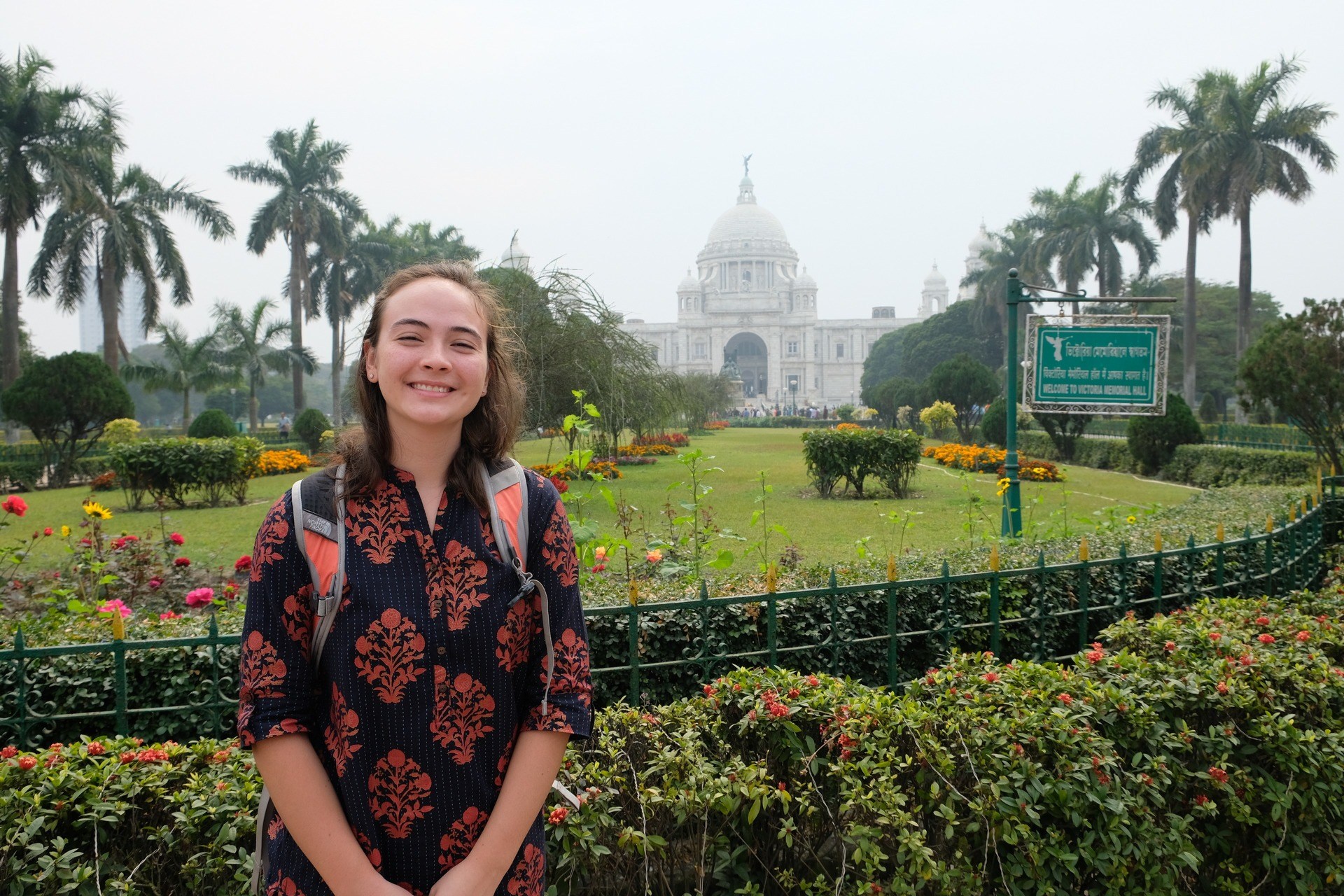 Abby Shifley at the Victoria Memorial in Kolkata. 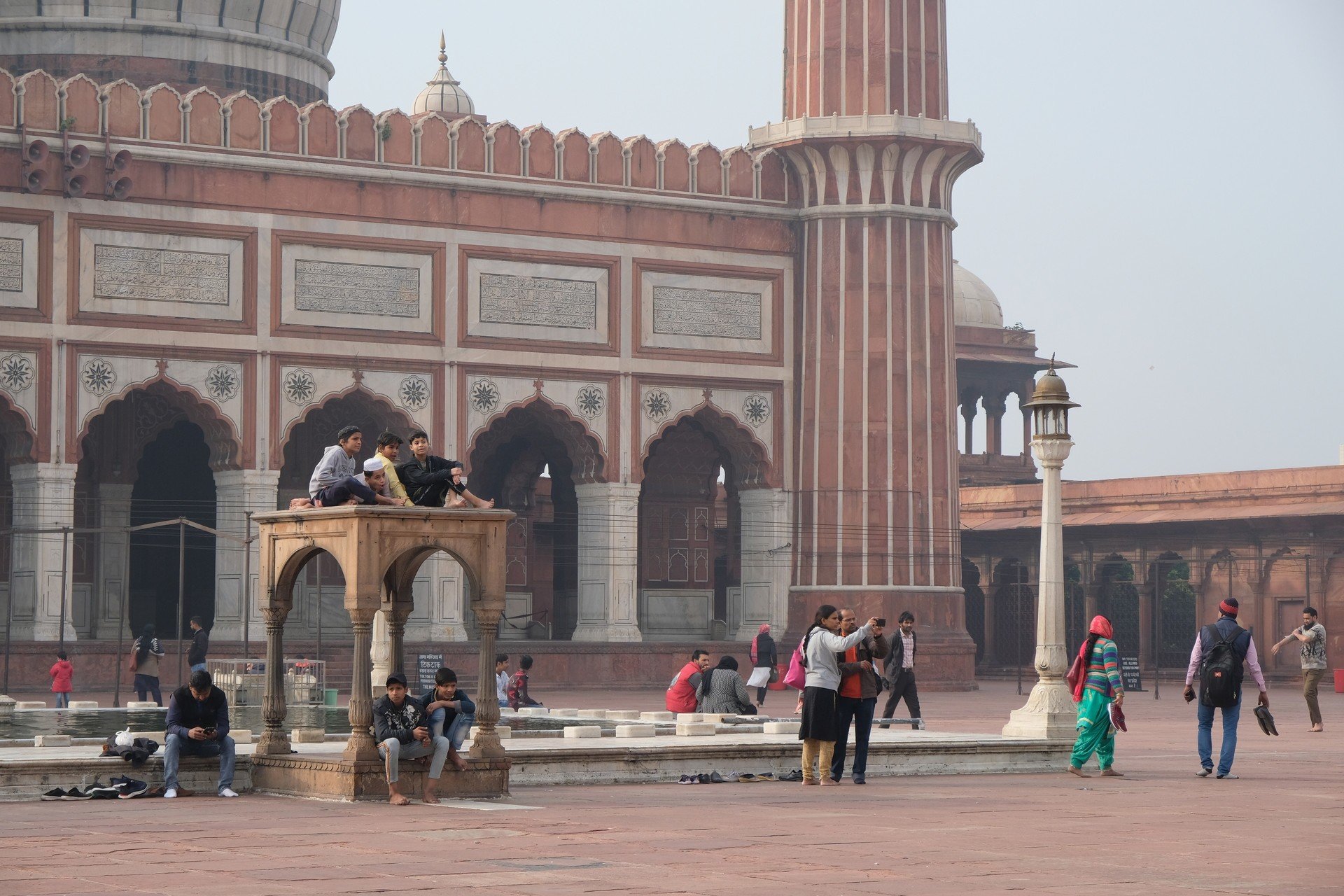 BGSU multiplatform journalism major Abby Shifley traveled to New Delhi, India, in December and January. She went on this trip to research human trafficking in India, a country where she spent 10 years of her life.

The moment I stepped off the plane in New Delhi, India, I knew my time there was going to be meaningful.

Barely capable of walking straight after a grueling 15-hour flight, I emerged from the aircraft and immediately took a deep breath of smoggy, polluted Delhi air. It was like someone had lit a cigarette in front of my face — and I couldn’t have been happier about it.

And, most importantly, I was there for a purpose, with a plan that was only possible through the generosity of the Givens Fellowship. The fellowship offers students the opportunity to create their own personal growth experience. It is not a study abroad opportunity, or any other type of academic program taken for course credit.

The fellowship purely encourages the student to pursue an issue or experience that will impact them greatly.

My experience started out with two main focuses, which then developed into three once I got to India:

My third focus developed because protests against two recent government actions, the Citizen Amendment Act and the National Register of Citizens, were taking place during the time of my visit. I could hardly escape this volatile issue as it played out all over the country. 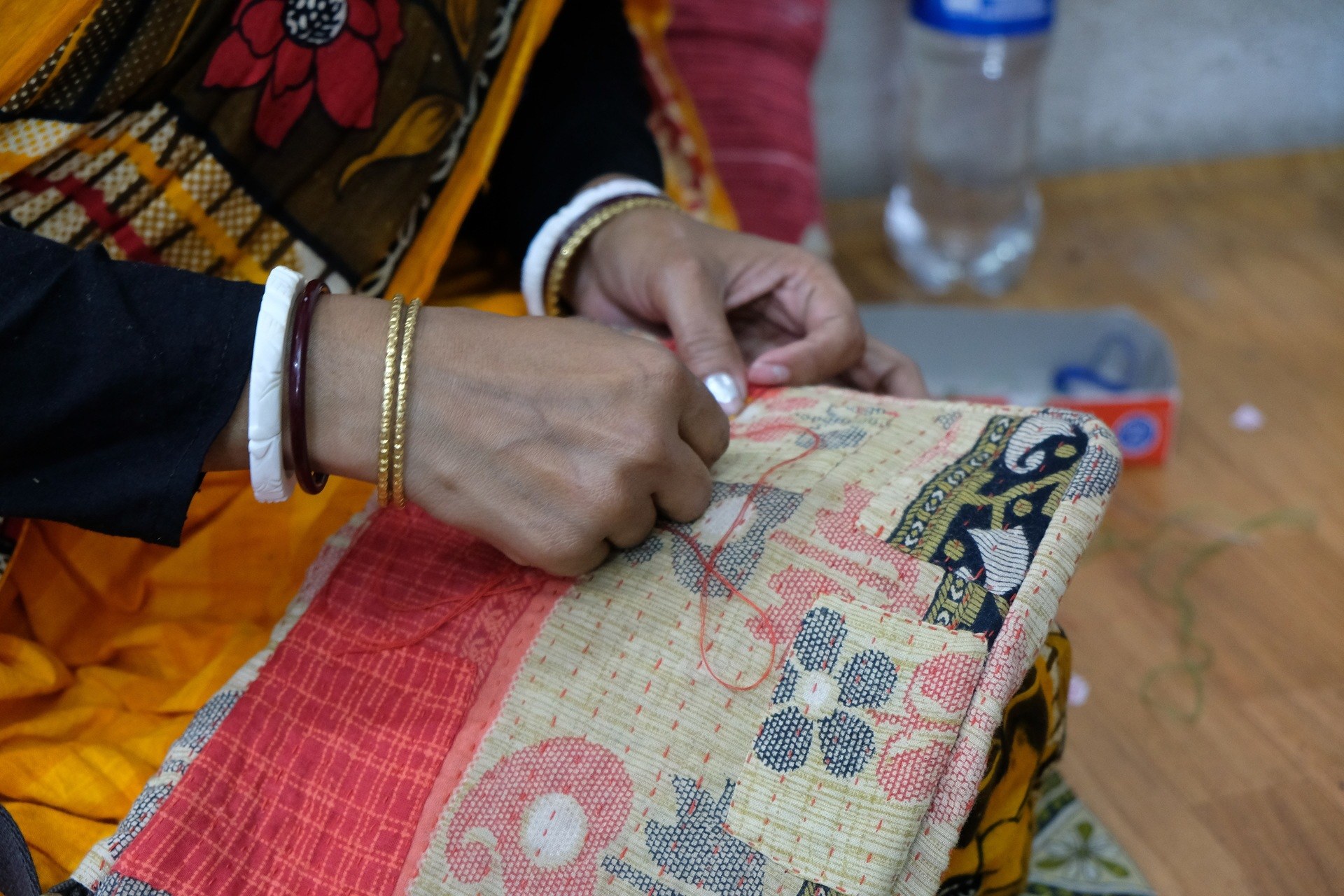 Hands of a woman rescued from trafficking sewing a bag in Kantha — and ancient Bengali embroidery style.

Just one day before I got on the plane to leave the U.S. for India, the very area I grew up in was in turmoil. Jamia Millia Islamia is a Muslim university just opposite the neighborhood where I once lived.

The university had been the site of a few peaceful protests, but on Dec. 15, police stormed the university and beat students — not all of whom were part of the demonstrations.

Because I had lived by the university for so many years, this incident prompted me to learn more about why the protests were happening. I explored the topic through Google, Twitter, conversations with a few family friends, and by speaking to staff and students from a popular English language school in this predominantly Muslim area. I learned that the protests were against the CAA, an act that allows some refugees from various nations bordering India to become Indian citizens, but only if they are of certain faiths.

The act excludes Muslims from the list. Many protestors claim this act is discrimination based on religion, which is a violation of India’s constitution.

In combination with the CAA, the NRC also serves to profile and discriminate against Muslims. Many from the poorer classes, some of whose families have lived in India for generations, are not registered properly with the Indian government due to lack of proper documentation (of births, marriages, etc.). This common problem for the poorer classes now becomes grounds for expulsion because, under the CAA, a non-registered Muslim has no pathway back to citizenship. The NRC requires documents that the poorer classes, who are some of the most vulnerable demographics in India, simply don’t have access to.

I met up with an American couple in Kolkata who are in the process of starting an English school in a Muslim area of the city. This couple has welcomed a recently displaced Muslim family of six to stay in their home for a period of two months. The adult members of this Muslim family are extremely panicked regarding the NRC, because none of the dates on their “official” documents (births, marriage, date of entrance into India, etc.) match, and some of the names are misspelled as well. This family has lived in Kolkata for generations but are worried they will be excluded from the NRC due to the faulty documents.

The 2001 Indian census says that 65% of the country is illiterate. In this particular Muslim family’s case, only the eldest daughter, 21, is educated enough to have the ability to read and review their official documents. But even she is hindered by a very complicated process that often involves bribes to get the documents properly filed.

I’m not sure of the situation’s resolution, but my heart goes out to the family and I hope the NRC doesn’t get implemented nationally any time soon.

I also was able to carry out the original focus of my proposal — to better understand human trafficking in India. I spent most of my time in New Delhi with one organization, but also travelled to Kolkata for a few days to visit two anti-trafficking organizations there.

I gained a lot of knowledge from the leaders of these organizations, but a few sobering facts have stuck with me especially: 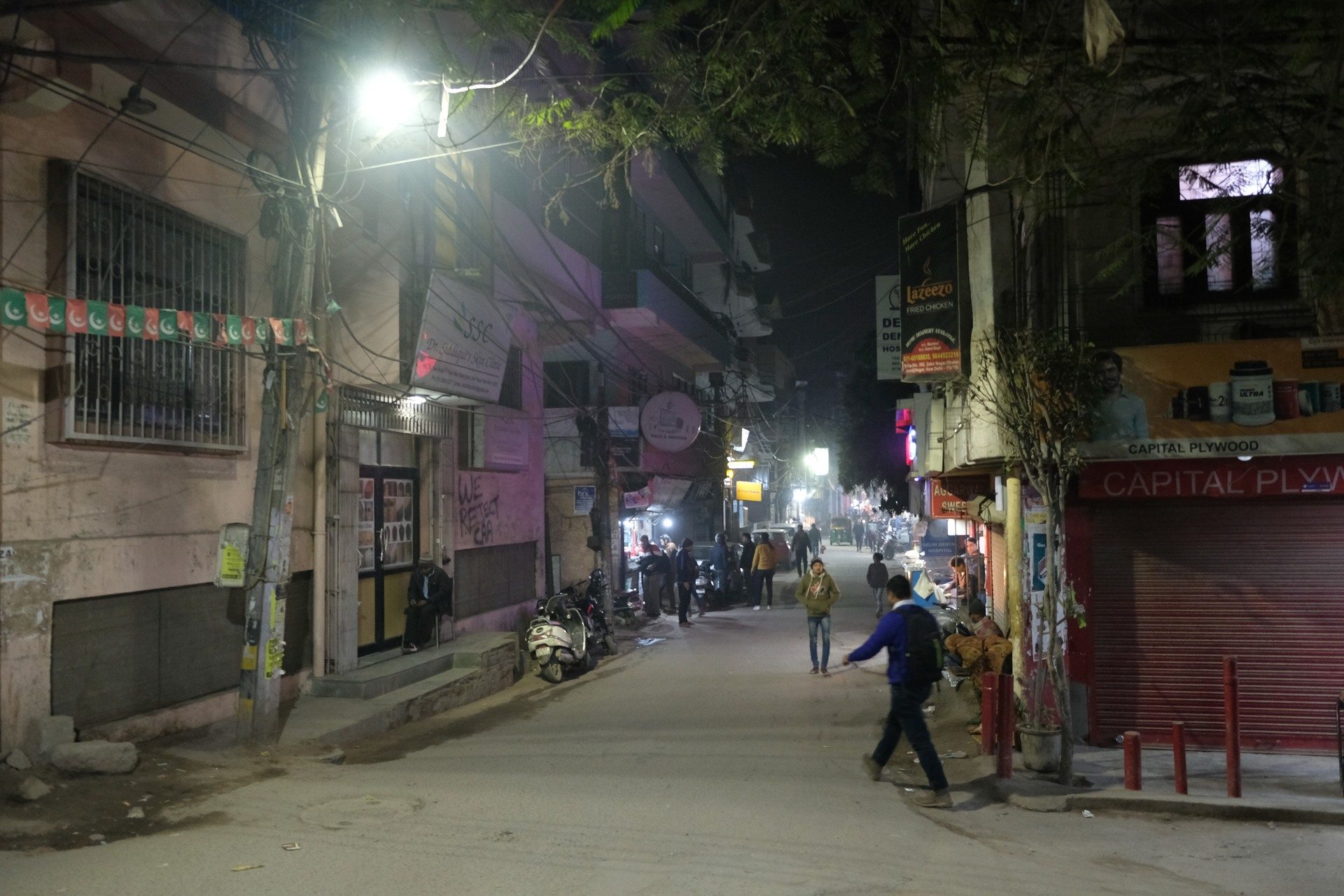 A predominantly Muslim neighborhood in New Delhi. Graffiti on the left side of the street reads, “We reject CAA.”

But they are, nevertheless, impactful.

I also learned that Kolkata has the largest red-light district in Asia. Both businesses I visited in the city were in this district, and I had to be escorted by one of the employees in and out of the area. These two businesses in Kolkata provide employment to women who have been rescued from trafficking.

But I was most affected by the time I spent in New Delhi with an organization I cannot name for safety reasons. The business provides a home for women and girls who have been rescued from trafficking, and in some cases provides training in a trade.

The women and girls face forbidding obstacles in their lives, such as a lack of education (since they were trafficking from a young age), mental illness and the absence of family (since families are doing the trafficking in some cases). But some of them, with the help of the business, go on to become seamstresses, jewelry makers and even nurses.

Stories of perseverance were hard to come by, especially considering the re-trafficking rate is 90%. But I was reminded of hope by hearing about some of the business’s success stories and by interacting with two of the girls who had graduated from the program — both my age.

I helped them organize around 350 earring designs. Apart from physically sorting nearly 1,000 pairs of earrings together, I was tasked with labeling and coding each earring design, preparing the designs for website sale. I engaged with these girls and this small freedom business created for them in hopes that the earnings from website sales in the U.S. could continue to supply their wages. The time I spent with them was filled with smiles and laughter (my poor attempts to communicate in Hindi were often the source of the laughter).

I was reminded of suffering everywhere in Delhi and Kolkata, from the scars on the street dogs, to the homeless elderly women tapping on car windows during red lights, to the suffering endured by the women and girls who had been trafficked. But even though the initial reaction I had was to despair, once I got to know the people working in the organizations and some of the girls who had been rescued, I could see hope.

I’m still processing — and I can tell it’s going to take a while before I truly know what the experience means for the rest of my career.

But one thing I can say for sure — I will be back in Delhi. It might not be right after graduation, but I feel drawn to the city.

I plan to apply to a few internship programs offered by the organizations I met with. I am also working on my Honors Project this semester, which will be a website and series of articles aiming to help raise awareness of how to spot trafficking in the U.S. and the need for anti-trafficking training for medical professionals, law enforcement, as well as the general public.

Everyone is affected by trafficking — otherwise known as modern-day-slavery — and it is an issue everyone should be aware of.