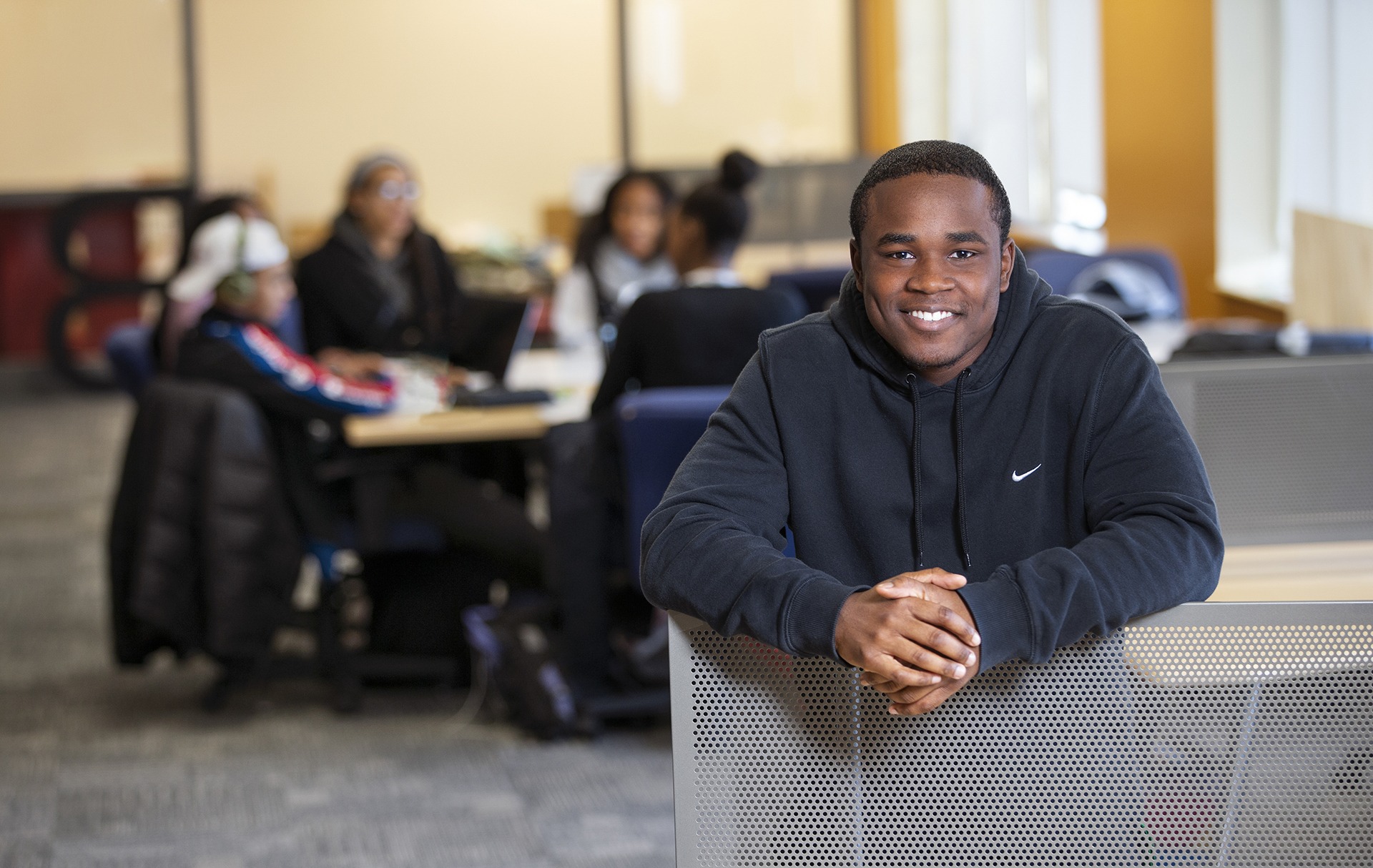 Kyron Smith knew he wanted to attend Bowling Green State University from the moment he met the recruiter at his high school’s college fair in Southfield, Michigan.

"She was so friendly and really sold me on the University,” Smith said.

During a subsequent campus visit, the caring atmosphere at the University impressed Smith and reinforced his desire to attend BGSU.

Over the past three and a half years, Smith has discovered that his first impression of BGSU was correct. He is graduating with a Bachelor of Arts in political science with a double minor in recreation and entrepreneurship in December — a semester early, thanks to the 12 College Credit Plus hours he earned while in high school.

"People really do reach out and care at this university, from top to bottom,” Smith said. “Every year, I’ve had a different family here.”

Smith was a member of the Chapman Learning Community (CLC) his freshman year. The community is designed especially for students who have an interest in service work and who want to develop their capacity as future leaders. He said the CLC secretary became his “mother away from home.”

Because of his positive experience with the CLC, he decided to become a resident advisor during his sophomore and junior years. He said that his Centennial Hall residents and everyone in Residence Life became part of his BGSU family.

That family continued to grow throughout his junior year, which Smith said was his busiest year, but also his favorite and most rewarding year. Smith was elected president of the Black Student Union, and he also began working as an administrative assistant at the BGSU State Fire School in the spring of his junior year.

"People really do reach out and care at this university, from top to bottom"

This extended family at BGSU has taught him many things, including how to lead communities that have members with different and conflicting views.

“In college, you’re around people from different upbringings and backgrounds,” said Smith,  who attended Southfield High School for the Arts and Technology. “You learn that everyone doesn’t think the same way you do.” He believes that everyone’s opinions are valid and that it is important to listen to other people.

The University has recognized Smith’s involvement and leadership on campus. Smith was named a McNair Scholar in 2018 and was given the Ray Marvin Leadership Award in 2019. The McNair Scholars Program encourages students to pursue graduate studies by providing opportunities to define goals, engage in research and develop the skills and student/faculty mentor relationships critical to success at the doctoral level.

Smith presented his McNair Scholar research project “Funding Policy and Education Disparities in Southeast Michigan” at the 25th annual Undergraduate Research Conference, hosted by the University of Buffalo, in Niagara Falls. He also presented at another McNair program research conference at Baylor University in Waco, Texas.

In addition to gaining experience in research and presentation, Smith believes that the McNair Scholars Program made him a better student.

“It helped me understand how and why I have to do things,” he said.

The program also gave him the opportunity to take his first solo trip. He went to Washington, D.C., and toured Georgetown University and George Washington University. He had an amazing trip and plans to visit the nation’s capital again in the future.

After graduate school, Smith would like to spend some time traveling and living overseas. He wants to learn what other countries are doing to improve their communities and how those practices can be implemented back in the United States.

Smith sees a future in local or state government or urban development.

“I want to help people who have lived in a certain area stay in that area by improving their community,” he said.

Despite his desire to travel, Smith will eventually find his way back to the Detroit area.

“I feel a commitment to the community that’s made me who I am,” he said.

Smith feels very fortunate that he has been able to attend BGSU and is grateful for all of the opportunities he’s received.

As for his walk across the stage at commencement, Smith said, “I can’t believe I’m here!”