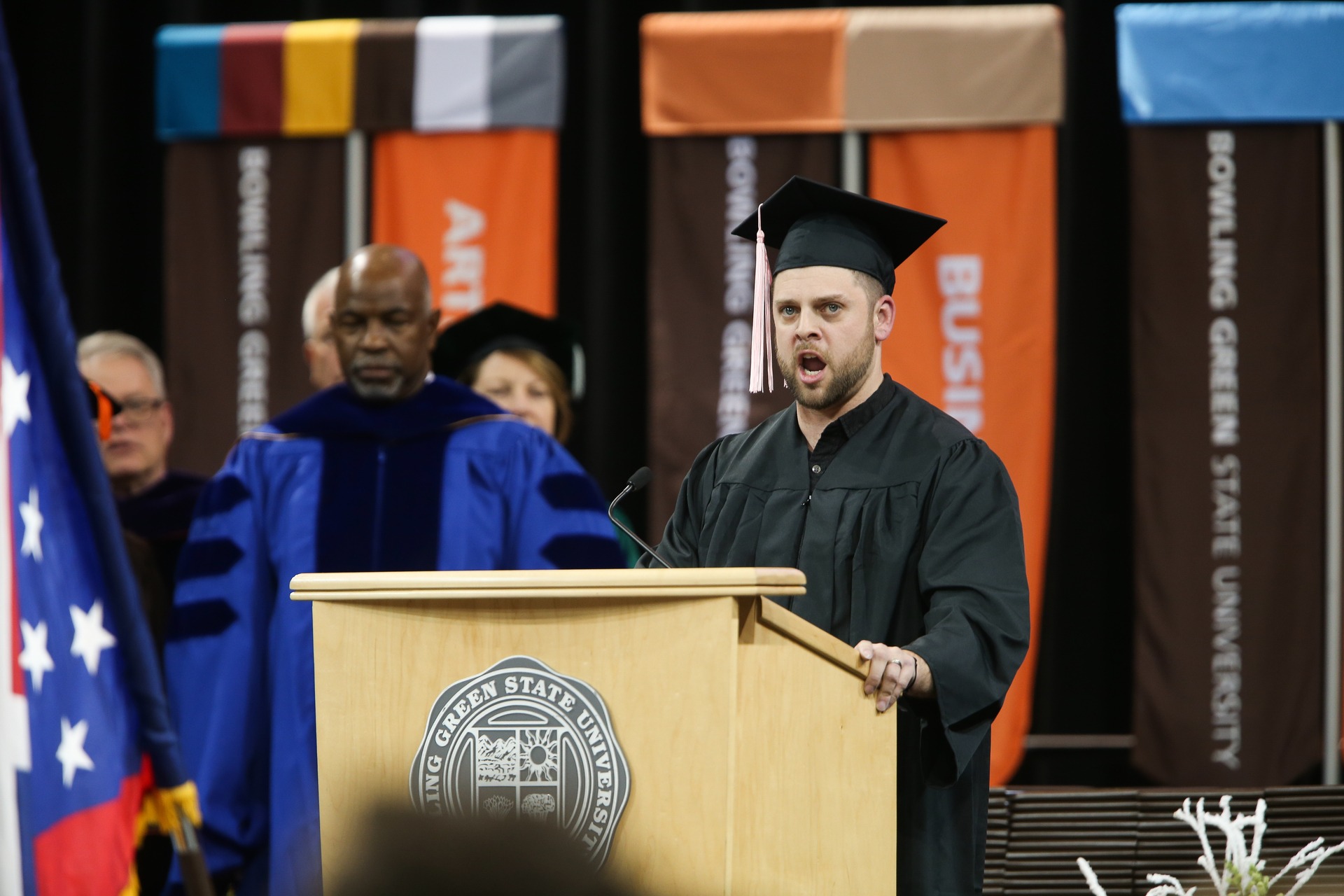 A corrections officer who loves to sing sounds like it could be the premise for a stage musical. For Bowling Green State University graduate Nick Kottman, it’s a reality. His road to graduation, though, has been anything but straightforward.

Kottman, a December graduate, majored in music education with specialization in choral performance. He returned to BGSU in summer 2016 while working as a third-shift corrections officer and securing lead roles in opera performances and helping to raise his two children, Archer, 6, and Aria, 3, with his wife, Hannah. To say he had a full plate would be an understatement.

After graduating from Bellbrook (Ohio) High School in 2005 and arriving at BGSU to study music, Kottman was unable to finish his coursework and eventually left in 2010. He found himself working odd jobs, in a janitorial supply factory, as a shoes associate at Kohl’s and as a car salesman. After his wife’s uncle suggested becoming a corrections officer, Kottman found that the officer’ union offered tuition assistance.

“That was my push to go back.” Kottman said. “I’ve always loved music, but I never had a formal voice lesson before college. When I walked into my re-audition, a lot of the voice faculty remembered me, but not really well. I started singing and they said ‘that is not the voice we remember.’ All of a sudden, I had this big, boisterous voice and it’s given me some good opportunities so far. Since coming back, every year, I’ve had some kind of role in the operas — many of them lead roles — and it’s been phenomenal.”

Kottman has had a number of people supporting his growth such as Kevin Bylsma, lecturer and répétiteur at BGSU’s College of Musical Arts, who helped him perform in the Toledo Opera, and Lance and Pam Ashmore.

“Lance is my vocal coach,” Kottman said. “Since I came back, he’s worked with me to get my voice more forward, brighter and more resonant. Not only that, he’s been a really great friend. Pam was actually my accompanist the first time around, and she graciously agreed to accompany me again — though her ear drums may have regretted it. Both of them have helped me tremendously and they have both been big influences on me.”

Kottman said that he would never have gotten to where he was without support from his family and friends. He was encouraged to take part in the Conrad Art Song Competition, which he managed to secure a win. Kottman admitted that he actually used to suffer from bad stage fright, to the point where his legs would shake.

“When Emily Morin (Kottman’s collaborative pianist for the competition) and I were working on our pieces for the art song competition, we took every opportunity to perform in front of people to help with stage fright," Kottman said. "In fact, dealing with the worst inmates Ohio has to offer helped with stage fright too.

"All of us in the finals area were super supportive of each other. If we can’t support each other in our craft, how can we expect others to support us?”

In between competitions and performances at the Bowling Green Opera Theater, Kottman became a master at optimizing his time, especially since he continued working all night at the prison.

“Sometimes I would get mandated into the next shift, so I had to talk with my professors and let them know I may or may not be in class, and they were very helpful,” Kottman said. “There were days where I would be off at 6 and have an 8 o’clock class. I would get home, get my kids dressed and dropped off to where they needed to be, and then go straight to my classes till the end of the day. In between classes, I would have hour blocks and I’d go sleep in my car.”

It was those small moments that Kottman learned to appreciate; with his wife, his kids, and his friends in the music department.

“There’s no way I would have been able to go back to BGSU and do what I did without my family,” Kottman said. “My wife was super supportive when I went back. There were days where I was completely and utterly beat down and my children would run in and shout ‘Daddy!’ They’re all excited about seeing me graduate.”

Juggling multiple full-time commitments is no small task, and Kottman does not plan on forgetting the love and support he received through all of it.

“I realized I was not the best student the first time around, but when I came back, everyone was very welcoming, especially with the opera program,” Kottman said. “They made BGSU feel more like a home.”