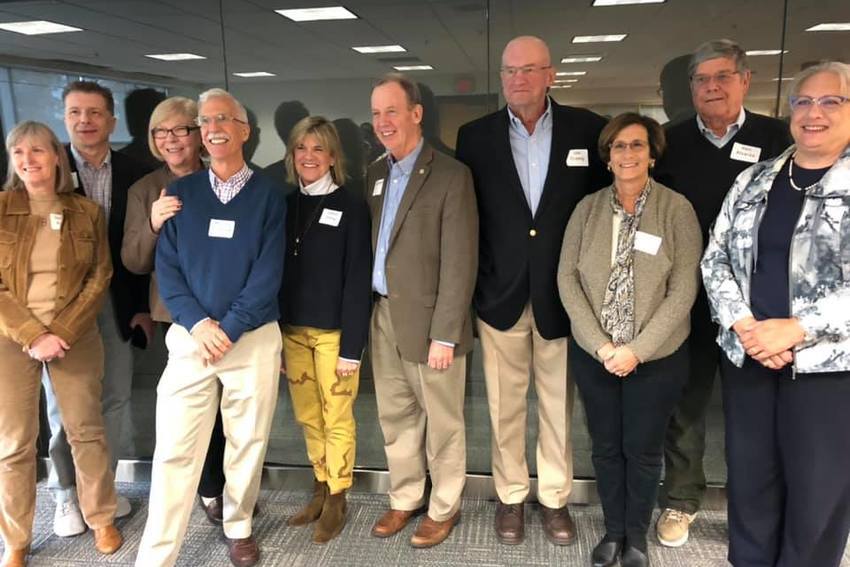 Alumni, students and past and current faculty come together to mark significant milestone

Fifty years ago, Neil Armstrong was the first man to walk on the moon as part of the Apollo 11 Space Mission, the Woodstock Music Festival attracted more than 350,000 people and the newly established Public Broadcasting Service (PBS) introduced Big Bird and the group of Jim Henson puppets to young audiences across the nation.

That same year, Bowling Green State University was in an expansion mode, as it had been for a few years, with the start of programs such as environmental science and computer science. Also in 1969, the industrial-organizational psychology program granted its first doctoral degrees.

The industrial-organizational psychology and computer science programs recently invited alumni to campus to reflect on the past 50 years and to look ahead to the next 50.

“We were excited to have alumni across many generations return to campus,” said Dr. Michael Zickar, chair of the psychology department. Dr. Sheldon Zedeck, one of the first graduates of the doctoral program, was the keynote speaker for the two-day celebration.

“His talk, ‘Reflections on 50 Years as an I-O Psychologist,’ inspired students and faculty,” Zickar said. “He shared stories of his roots at BGSU and his long and distinguished career which continues to this day with work on artificial intelligence and personnel selection.”

Faculty, students and alumni also came together to celebrate the many successes of the program and to plan for the future.

The program’s first faculty were Robert Guion and Patricia Cain Smith, who died in 2012 and 2007, respectively, and Joe Cranny, who participated in the 50th reunion event. For the past 20 years, the program has been ranked by U.S. News and World Report as one of the top I-O programs in the country. Currently, the program is tied for second with the University of South Florida, Georgia Tech and the University of Minnesota.

A total of 205 doctoral degrees have been awarded since 1969, with graduates serving as faculty in academia and working in Fortune 500 corporations such as Nike Inc., 3M, Procter and Gamble, as well as leading business consulting organizations such as development Dimensions International and HUMRRO. The job of IO psychologist has been listed as one of the fastest-growing jobs according to the U.S. Bureau of Labor Statistics.

More than 200 computer science alumni, students and current and past faculty participated in the program’s 50th anniversary events.

“I thank everyone who participated,” said Dr. JK Jake Lee, chair of the computer science department. “The alumni not only were able to meet their former classmates and faculty members, but they also shared their experiences with the current students.”

Dr. Alex Aiken, who graduated with a computer science degree (and a music degree) in 1983, was the keynote speaker at the Nov. 7 dinner celebration. Aiken, who is the Alcatel-Lucent Professor of Computer Science at Stanford University, presented “Computer Science: Looking Back and Looking Forward.” His insightful talk provided the framework for the conversations about the industry that continued throughout the two-day celebration event.

“His presentation was not only about the past, present and future of the technical field of computer science, but he also gave us an opportunity to think about how those of us leading the technology can fit into society,” Lee said. “For 50 years, BGSU has been preparing students to be leaders in the computing industry. We were the first university in Ohio to establish an undergraduate program in computer science."

During the mid-1960s, faculty from several departments on campus saw the potential for creating a computer science program at BGSU. Under the leadership of Dr. David Krabill, a professor of mathematics, and Dr. Charles Leone, former dean of the Graduate College, the proposal for the undergraduate program was developed, approved by the Board of Trustees in February 1969 and classes started that fall.

In 1970, after a national search, Dr. David L Fulton was hired as founding chair of the department. Fulton, who was the primary speaker for the Nov. 8 morning session, recalled that he hired a strong team of faculty to start the program.

“We were all young and enthusiastic, with no ‘old guard’ to tell us ‘no,'” he said about first faculty members Joan Stepanski, Lee Miller, Jack Woolley, Rick Thomas and Ann Marie Walsh. “We were friends working together for something wonderful.”

Fulton was also proud that during his tenure, the computer science master’s degree was started in 1972 and BGSU was “put on the map” in 1975 when the department hosted and set the standard for the SIGGRAPH (Special Interest Group on Computer Graphics) conference. After his successful tenure at BGSU, Fulton went on to a successful IT professional with Fox Software and later Microsoft.

“It was delightful to catch up with so many talented and successful computer science alumni,” said Dr. Ron Lancaster, one of the former computer science chairs and faculty members who attended.