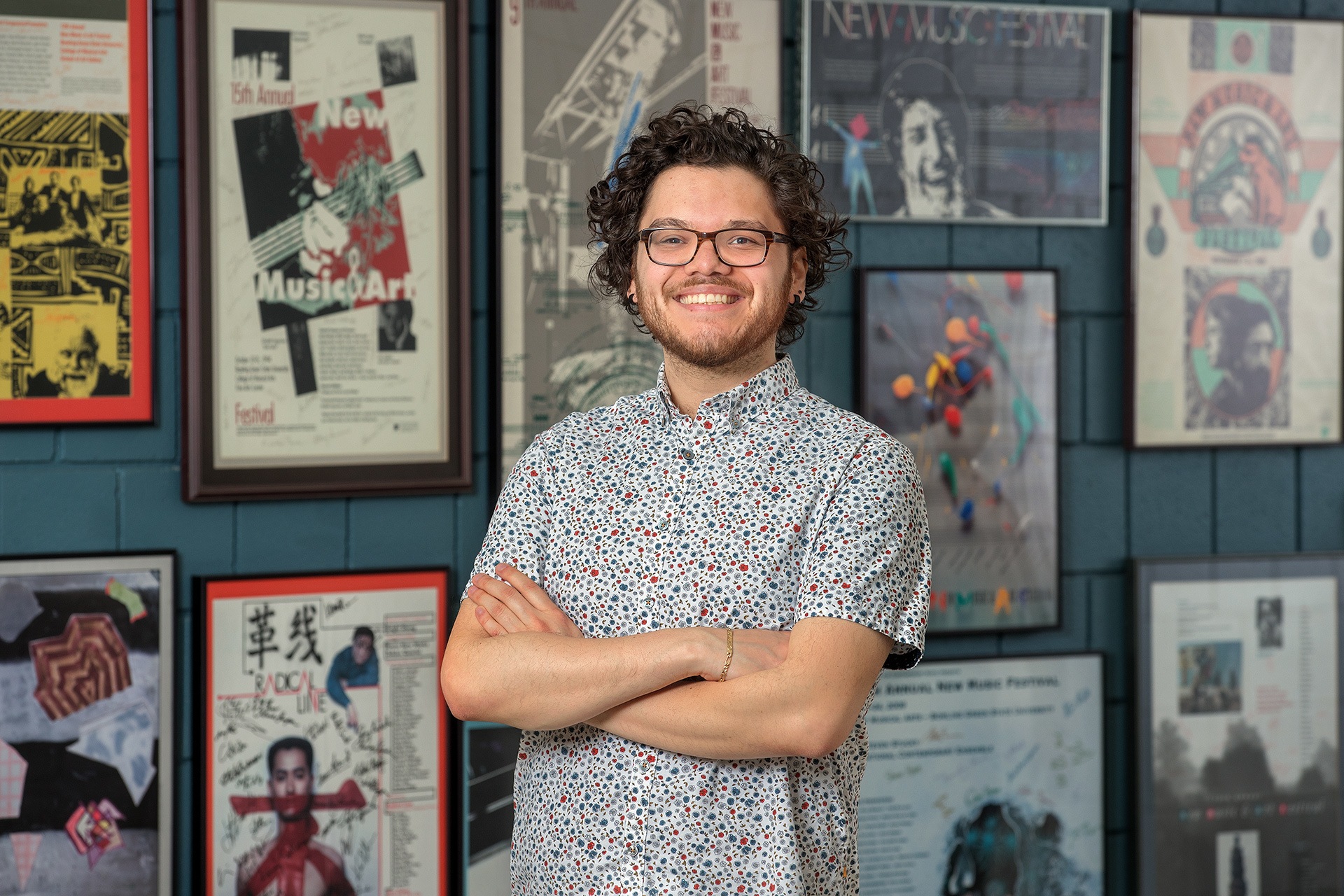 Emilio Gonzalez had a lot of difficult choices to make after graduating from Pacific Lutheran University with a Bachelor of Music in composition. Picking Bowling Green State University for his graduate degree is one for which he is grateful.

Gonzalez is graduating with a Master of Music in composition in an environment much different than his hometown of Tacoma, Washington. While searching for a graduate program, Gonzalez researched a wide range of composition programs and big state schools such as Arizona State University. His composition professor suggested BGSU because of its New Music program.

"It has been the opposite experience of a large state school," Gonzalez said. "Everyone is really invested in contemporary music here. I was offered an assistantship and the cost of living goes a lot further here in the Midwest."

The sense of community at BGSU is something Gonzalez picked up on right away during campus visits and graduate program interviews. However, he said that it was actually very different once he arrived in the fall semester of 2017.

"To actually be a part of this strong campus community is a lot different than what I thought it would be," he said. "My expectations have been met and my experience has gone beyond what I anticipated."

The faculty in the New Music program have been instrumental to Gonzalez's success, and he has enjoyed the one-on-one teaching sessions he has received. He has taken advantage of the open office hours his professors offer and feels that he has built lasting connections in the composition world. Gonzalez even performed in the Middle Eastern Music Ensemble last fall with his professor, Dr. Christopher Witulski.

"Overall, I would say I spent most of my time in the College of Musical Arts working with Dr. Mikel Kuehn and Dr. Elainie Lillios on my composition work," Gonzalez said.

As president of Praecepta, Bowling Green's student organization for the performance and promotion of new music, Gonzalez has helped promote new music in the community. Most recently, he helped plan a collaborative event featuring new music between Praecepta and the BGSU Collegiate Ohio Music Teachers Association Chapter. Gonzalez said that they took student composers and paired them with student teachers, with the goal to produce a piece in the fall semester that would be played by the student teachers' piano students in a spring recital.

"We had a nice range of student participants from beginner to intermediate, and it was a great experience to bring music education into our composition program," he said.

His most recent commission titled "Tahoma" involved another collaboration with young musicians. Kellogg Middle School and Einstein Middle School in Shoreline, Washington commissioned him to compose a concert band piece.

"Tahoma is a word from the local indigenous languages that is the name of what we now call Mount Rainier," Gonzalez said. "This piece is meant to be a musical offering to the first people inspired by the mountains," Gonzalez said.

He participated in a three-day residency at the schools, where he worked with students on band rehearsals and held a Q&A session for prospective students interested in music composition. It was a surreal moment for Gonzalez, watching the next generation of musicians performing a piece he composed in the area he grew up. During the residency, he was blown away by the students' thoughtfulness and their deep level of understanding in their musical questions.

While Gonzalez is leaving Bowling Green in the summer, his final performance has yet to take place

"I performed my final composition last month, but the wind ensemble is going to perform my capstone concert composition from my undergrad at the New Music Festival in the fall," he said. "I am very excited and I will definitely be flying in for that. I think I will work with the composers and performers I've met here in the future and I want to maintain those connections."

Gonzalez plans to continue his career as a composer, and would like to move back to his home state of Washington.