The  price of milk hasn’t changed much since 2015. Neither has a gallon of gas. But the lives of the 4,000-plus students expected to graduate from Bowling Green State University this year have changed dramatically in the last four years.

They’ve made lifelong friends, tried new activities, visited new countries and developed skills to take into the workforce or the next phase of their education.

We recently checked in with five students we first met in August of 2015  as they prepare for May’s commencement. Read on to learn about the Class of 2019’s educational and personal journeys. 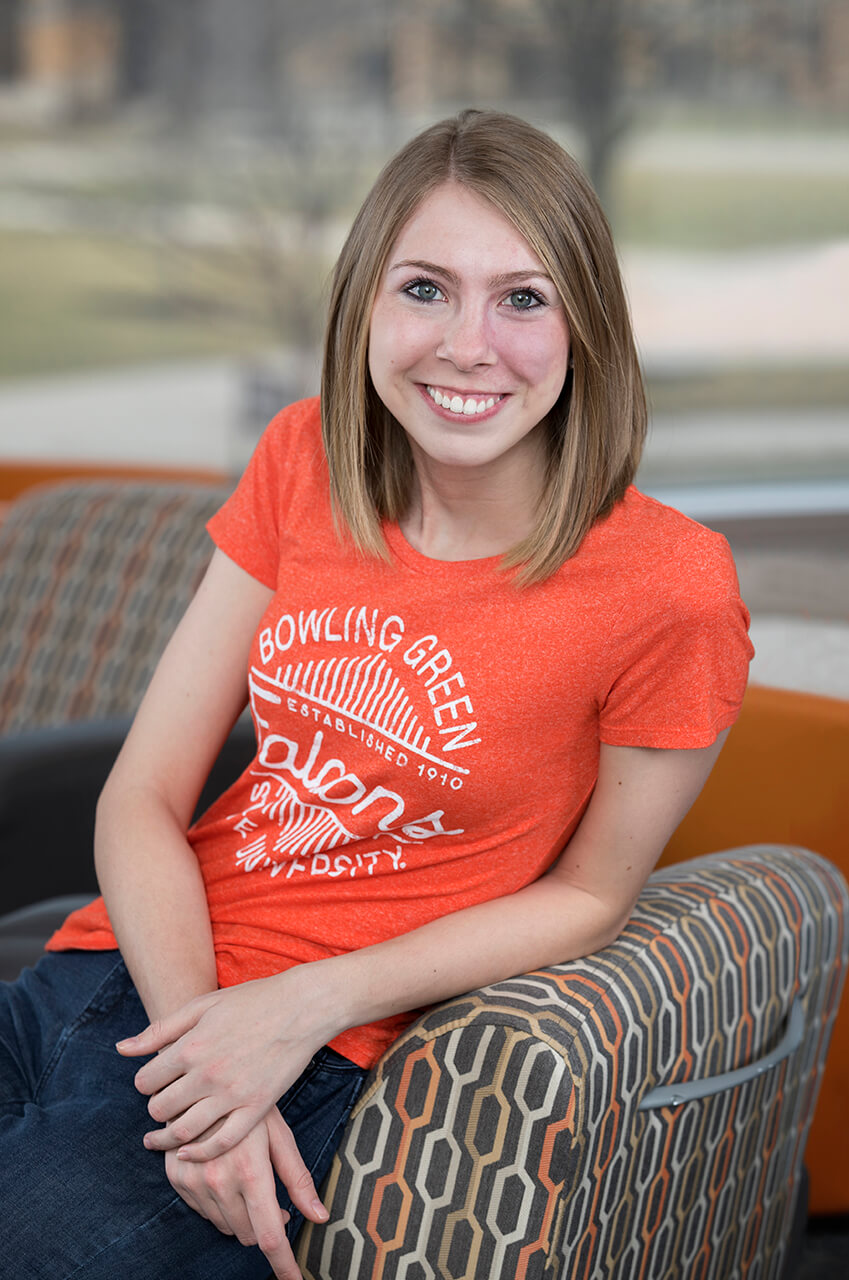 Hannah Cubberley can pinpoint the exact moment she knew BGSU wanted her to be a Falcon.

“As soon as I stepped onto the Bowling Green campus, I felt immediately  welcomed and the feeling was truly unique and unlike my previous visits  to other colleges,” she said. “The admissions staff met me with warm  smiles and enthusiastic greetings as though they knew I was home before I  even knew for myself. I had found the university that would foster my  education, creativity, leadership skills and offer countless remarkable  opportunities for personal growth.”

That moment made such an impact on Cubberley that she became an Honors College Ambassador, welcoming future Falcons to their new home.

“The thing that sets BGSU apart is that people care deeply about our Falcon  Family, and there is always someone there to offer support and make you  feel like you belong,” she said.

In some ways, Cubberley has always belonged at BGSU. Her parents are  Falcon Flames and some of her childhood memories include visits to  campus.

“I fondly remember attending BGSU hockey games with my parents and running  around Anderson Arena looking for Frieda Falcon so I could give her a huge hug,” she said.

In her various roles on campus, Cubberley has since taken many photos with  Freddie and Frieda Falcon. She joined Delta Zeta sorority, participated  in or led four BG Alternative Break trips and she and her best friend, Samantha Steirer, were on the 2018 Homecoming Court.

“But my key involvements have been with the Marvin Center for Student Leadership and Undergraduate Student Government,” she said. “I was so humbled and excited to have been selected to be the voice of undergraduate students at BGSU.

“Because  of my involvement, I have felt connected to the University and I have  been able to make a positive difference in the lives of my peers through  advocacy and student leadership development.”

Despite being involved in so many University activities, Cubberley will  graduate with not one, or even two degrees in May. Instead, she will  take her education in political science, Spanish and communication with her as she pursues a career influencing public policy in politics.

“I would love to move to Washington, D.C., after I graduate to gain some  experience with think tanks or a political consulting agency,” she said.  “I also have plans to further my education by either pursing a Master  of Public Policy or attending law school.

“I have learned so much both inside and outside of the classroom that I am  confident I will one day have the career of my dreams, thanks to BGSU.”

Cubberley  highlighted several University resources and employees for fostering  her growth and drive, including the C. Raymond Marvin Center for Student  Leadership, the Honors College and the Learning Commons. 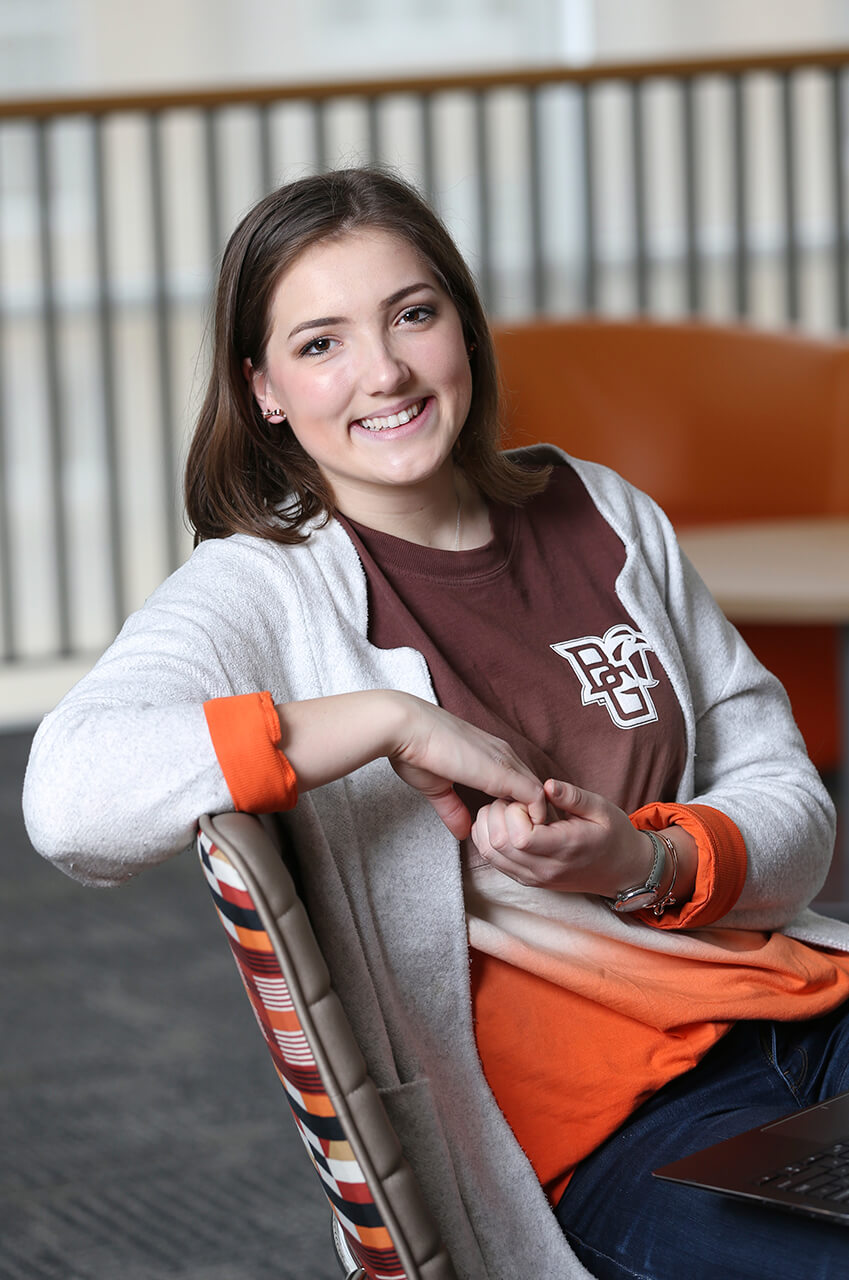 In  2015, as she was touring college campuses, Mary Fleck was considering a  major in journalism. But acceptance into the STEM scholarship program Academic Investment in Math and Science (AIMS) changed her trajectory toward mathematics.

Luckily, the change in major didn’t change her decision to come to BGSU. If anything, it solidified it.

“AIMS  encouraged me to get involved in undergraduate research, and after  discovering data science applications for an astronomy research project  my freshman year, I decided to pick up the data science specialization,”  said Fleck, who has a minor in Spanish.

Fleck will continue this path in graduate school.

“I  was accepted to study data science for public policy in a highly  competitive and top-ranked master’s program next year with the intention  of leveraging my computational knowledge and passion for service to  others to affect data-driven social justice,” she said. “If not for the  well-rounded education I received at BGSU and through the Honors  College, I wouldn’t be the robust thinker that I am today, and that is  so powerful.”

Fleck’s  experiences at BGSU included involvement in a number of service-based  organizations such as the Student Alumni Ambassadors and Omega Phi Alpha  National Service Sorority. She also received an Alumni Laureate  Scholarship, which connects students who are driven to become effective  leaders and make the world a better place.

“Through  these organizations and other campus experiences, I was able to make a  difference in my community while forming a community of my own,” she  said. “My BGSU community has encouraged me to live with purpose and  develop my passions, which has led to countless exciting and unique  opportunities from singing the national anthem at BGSU sporting events  to taking classes on poverty, rock music and ice skating to pursuing  nationally competitive research opportunities.

“The University’s investment in my personhood has shaped who I am and how I will influence the world.” 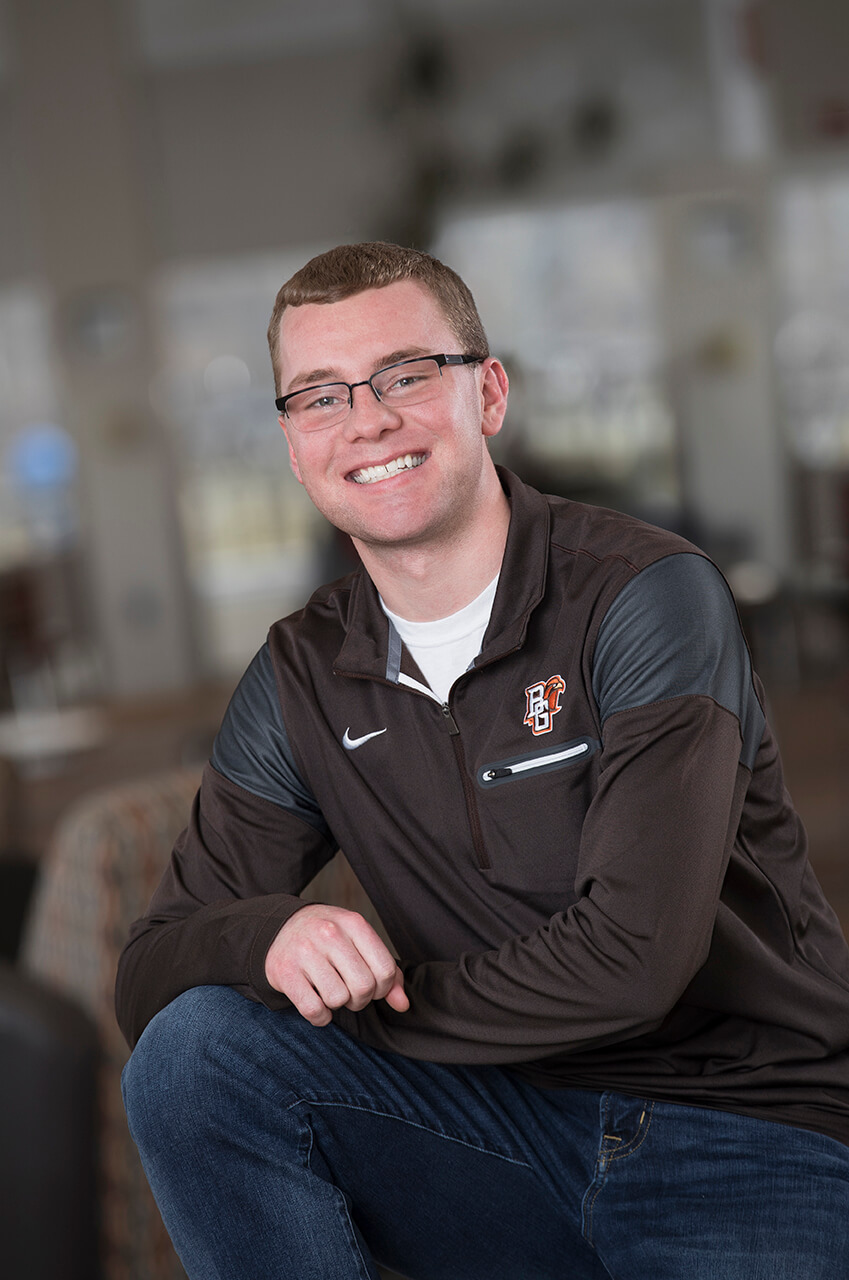 People might not know his name, but mention “the guy with the orange shoes”  and many can picture him. Van Wright, assistant to the vice president for enrollment management, has encouraged hundreds of students to choose BGSU, including senior Scott Knapke.

“My siblings, all four of whom attended and graduated from BGSU, were great  resources for finding out information about BGSU, but I have to credit  Van Wright for showcasing all that BGSU has to offer and for acting as a  direct contact to the University,” Knapke said.

Knapke said one of the many highlights of his first visit to campus was meeting mathematics education faculty, many of whom he said he’s grown  close to during his time at BGSU. An adolescence to young adult integrated mathematics education major, he is well on his way to reaching his career goal of becoming a  math educator. He is currently student teaching at Liberty-Benton High School in Findlay.

“BGSU’s coursework and field-based experiences throughout various schools in  the area enabled me to continue to grow fond of and maintain a passion  for mathematics education,” he said. “While my overall career goal is to  become a math educator, this goal comes with many other goals that  pertain to the way in which my students learn in my classroom. I will  strive to always have the highest belief in their own abilities. I will  aim to act as a support system and mentor for every one of my students,  just as I was provided with countless support systems throughout my time  at BGSU.”

Knapke’s  time at BGSU included being an Alumni Laureate Scholar, participating  in the Science and Math Education in ACTION Program and being a member  and leadership member of the Bowling Green Council of Teachers of Mathematics (BGCTM).

“My involvement that stands out the most to me, however, is with BGSU’s  student-led Math Camp, where we strive to instill in students a growth  mindset when engaging in mathematical learning and working through  problem solving and team-building activities,” Knapke said. “This  organization provided me with countless leadership opportunities and a  family-like community of individuals with whom I have established  lasting bonds.

Additionally,  this organization took me to places across the country and around the  world, including Thailand, China, Oklahoma, and numerous schools  throughout Ohio, so we were able to share our passions and ideas with  diverse individuals.”

Knapke will begin BGSU’s Master’s Degree in Curriculum and Teaching in the fall. 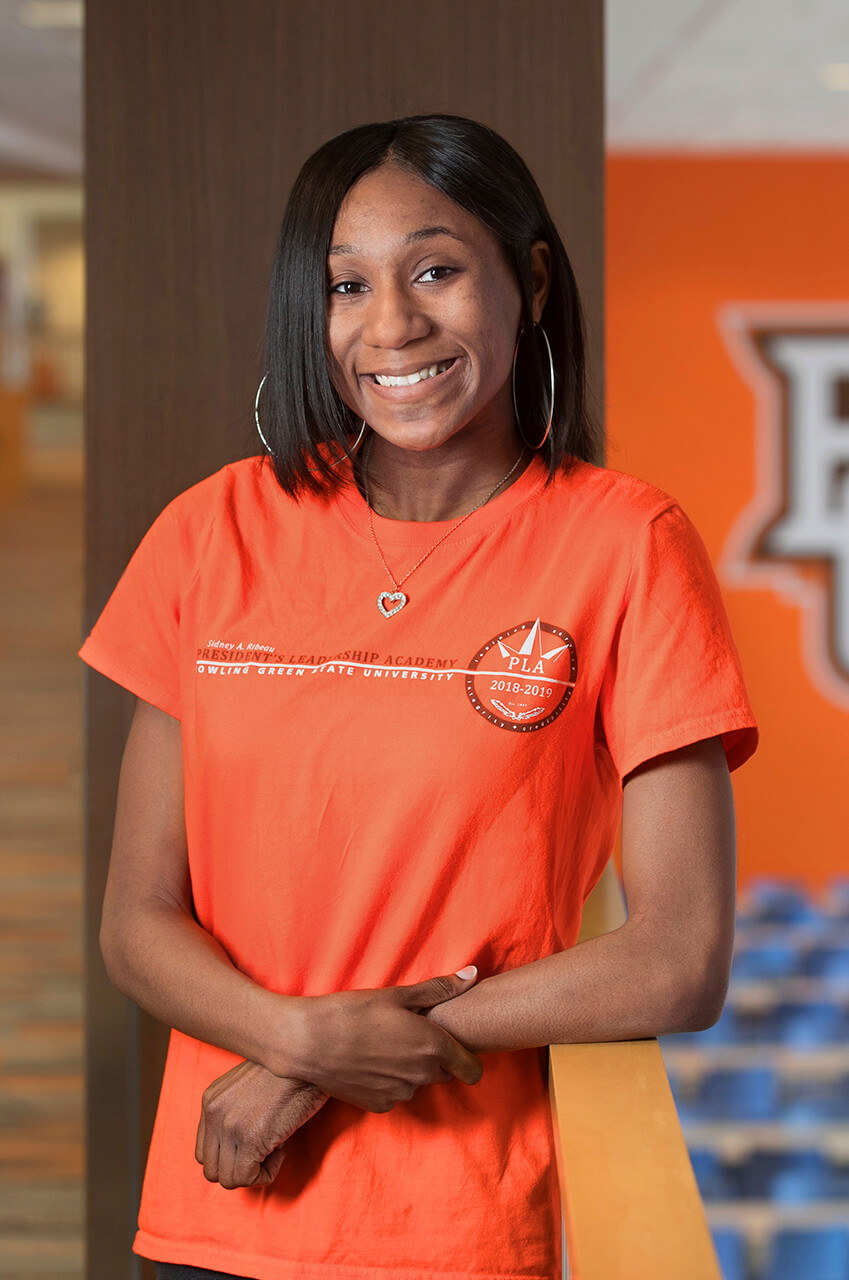 It is not uncommon for first-generation college students to have unique  fears as they navigate higher education. But after finding a welcoming and supportive community at BGSU, Detroit native Alisa Sledge jumped  into college and never looked back.

“My first real interaction with students on BGSU’s campus was during the  BGSU Detroit overnight stay during my senior year of high school,” she  said. “I was surrounded by a group of other Detroit
students  also interested in BGSU. We toured campus, stayed in residence halls  for the night, and ate in the dining halls. I was totally immersed into  the college life for a day and I loved it.”

An invitation to participate in the Sidney A. Ribeau President’s Leadership Academy,  a four-year leadership development program that engages scholars in  classes, workshops, experiential learning and community service  activities, was part of the reason Sledge chose BGSU, but not the only  reason.

“BGSU has a very welcoming community, which was one of my main reasons for  choosing this school. Every time I came to visit I was always greeted  with smiling faces,” she said. “And the amount of resources offered here  is exceptional. There is always someone that can help you in any  situation you may be in. Never be afraid to ask for help or where to find help because someone can always direct you to an answer or  resource.”

A business major with a specialization in international business, Sledge had heard  about the College of Business’s reputation before ever stepping foot on  campus.

“My life goal is to be a successful business woman,” she said. ”I also hope  to start a nonprofit to mentor young girls from inner cities such as  Detroit. I want to be able to inspire young ladies to reach their goals  and encourage them to go to college.”

During her time here, Sledge was a mentee and mentor of SMART (Students of Color Mentoring, Aiding, Retaining, and Teaching) and a member of the National Association of Black Accountants and the Student Budget Committee. 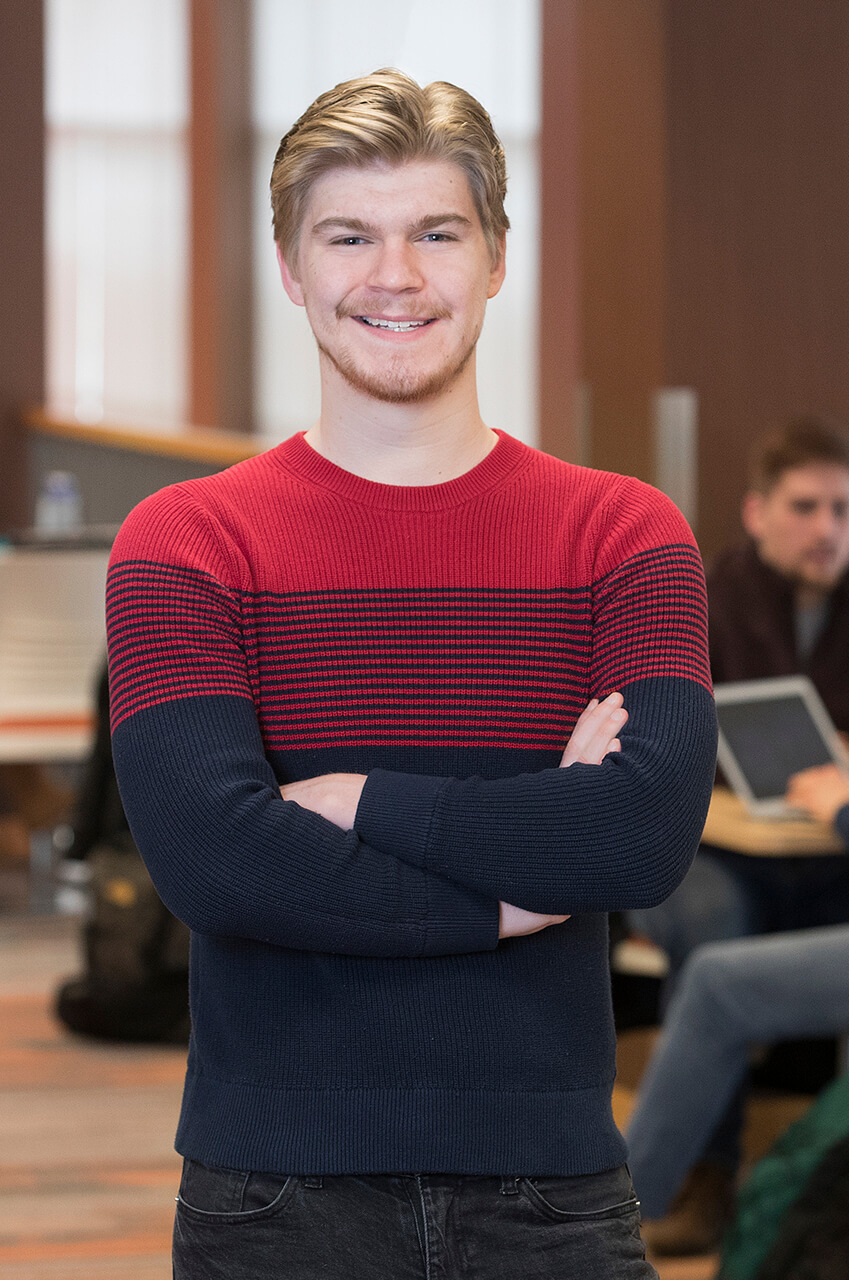 That’s the advice Phillip Zulli wishes someone had given him in the fall of 2015, when he set foot on campus as a freshman.

“Luckily for me, the constant wind wasn’t enough to deter me,” he said.

Zulli,  a public relations major from Cincinnati with a black windbreaker, has  had an active four years at BGSU. It began with an invitation to  participate in the Sidney A. Ribeau President’s Leadership Academy, a  four-year leadership development program that engages scholars in  classes, workshops, experiential learning and community service  activities. He has also managed marketing and social media efforts for  Falcon eSports and University Activities Organization, and is assistant firm director for Falcon Communications, a student public relations firm on campus.

“All  of these experiences have prepared me academically and professionally,”  he said. “I probably could not have found these awesome opportunities  anywhere else, and even if I could, it wouldn’t be with the same awesome  people I met here at BGSU.

“BGSU  is definitely a good standard for what a university experience should  be like. It has set me up for success; I’m ready to put it all to good  use.”

One of Zulli’s most memorable experiences was a two-week study abroad trip to Paris with the Department of Journalism and Public Relations.

“We had the opportunity to meet a lot of individuals who have made a  significant mark on journalism or public relations all around the  world,” he said. “We also had a lot of time to explore Paris and all of  its sights. It was a lot of fun and I learned a lot from all of the speakers.”