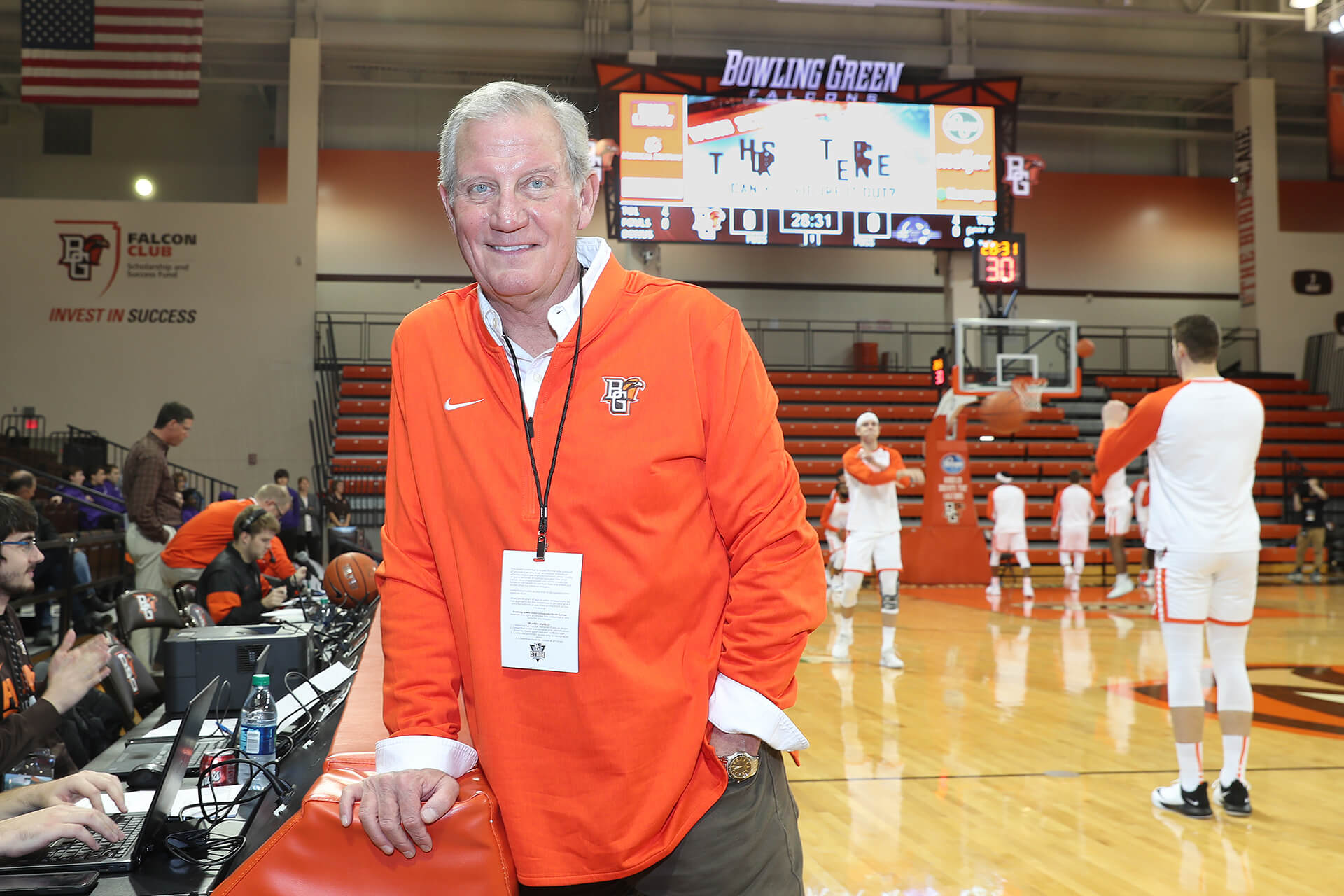 If you’ve been to a BGSU basketball game at the Stroh Center recently, you may have heard a familiar voice making public announcements during the games.

That voice belongs to Jerry Anderson, who recently retired from the anchor desk after a long career at WTOL-TV, Channel 11, in Toledo. Anderson has had a long broadcast career in northwest Ohio, and it all began at Bowling Green State University.

Anderson always knew he wanted to work in radio. He had a paper route in junior high school and a radio station was one of his stops.

“When I stopped by the radio station to collect money for the paper, I would just sit there and watch the D.J. through the window,” he said. “I was mesmerized.”

Anderson began taking classes as a speech major at the University in January 1972. He fondly remembers working for WBGU-FM radio on Saturday nights, which at the time was located on the fourth floor of South Hall (now known as the Michael & Sara Kuhlin Center).

“What college kid wants to work on a Saturday night?” he said. “But, to me, it was on the radio, and it was live.”

At the time, Anderson was working several jobs in order to pay his tuition.

“Neither of my parents went to college, so it was clear that I’d have to pay my own way,” he said.

In 1974, Anderson left BGSU after being offered what he describes as his “first real job” at WFOB-AM in Fostoria, Ohio. It gave him the chance to do what he loved — find and report the news.

“I covered Bowling Green City Council and Bowling Green Board of Education at night,” he said. “Then, every morning, I’d go to the police station to pick up the police blotter. I would stop at the fire building to pick up the fire reports, then once the county offices opened I would stop by the prosecutor’s office and the courthouse. Talk about shoe-leather journalism!”

“I remember how many good times we had.”

This was on top of working full time for his father at his auto dealership.

“When I got in the door, I worked and ran hard,” Anderson said. “You couldn’t outwork me, that’s for sure.”

Anderson remembers the small paychecks for the large amount of work he did, but it didn’t matter to him.

“I looked back at those years, and I know I had to have been struggling, but that’s not what I remember,” he said. “I remember how many good times we had.”

In 1978, Anderson made the move to WSPD-AM radio in Toledo. Two years later, he made the jump to television at WTVG-TV.

“How did Channel 13 hire me as a TV news reporter and I had never done a single television news story?” he said. “They just knew me from WSPD and they said, ‘You know broadcast and you know news, we’ll teach you TV.’ I learned fast. I was like a kid in a candy store.”

It was during this time in the 1980s that Anderson went back to BGSU. WTVG had a tuition reimbursement program, so he took classes in hopes of finishing his degree.

“It’s been one of those unfinished things in my life,” he said.

Fifteen months after he began working at WTVG, Anderson was promoted to the anchor desk. He eventually left the TV station and briefly returned to WSPD radio before  moving to WTOL-TV in 1994 to anchor its new 5 p.m. newscast.

Anderson retired from WTOL last year but still continues to host “The Leading Edge,” a 30-minute weekly program in which he interviews newsmakers in the area.

“Doing the ‘Leading Edge’ show beats the 12-second sound bite the and minute-and-a-half story,” he said. “It’s a nice outlet for me.”

Despite being retired, Anderson has been keeping himself busy. 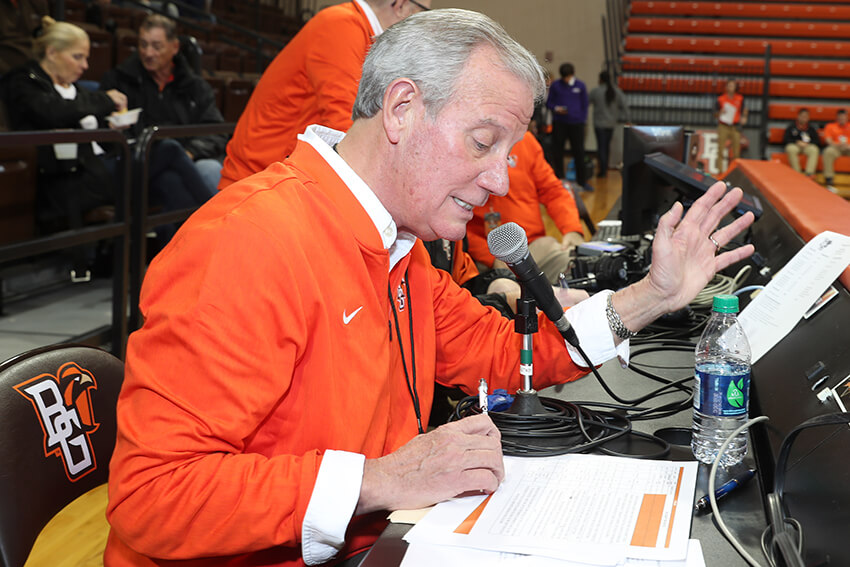 “I just knew I wasn’t going to go home and sit,” he said.

Anderson enjoys the Bowling Green community where he lives, and decided to spend part of his retirement as a bus driver for Bowling Green City Schools.

“I’ve always been about supporting this community, so driving the bus for the schools that gave me my high school diploma feels good,” he said.

After he filled in for David Rice as public announcer for one of the BGSU football games, another opportunity came for Anderson, to work as the public address announcer for the 2018-19 season of the BGSU men’s and women’s basketball teams.

“I’ve been a Falcon sports fan for a long time, so if I can do things for Falcon Athletics, it seems like a natural fit to me,” he said.

“I’m very lucky that they were Falcon sports fans, too; it was a great family thing for us to do,” Anderson said.

He also continues to be active in the community with charity auctions and hosting other events.

“If people keep asking, I will keep doing it,” he said. “That stuff will all continue as long as people ask.”

Anderson also has been thinking about spending his retirement taking online classes so he can finish his BGSU degree.

“I’m not ruling it out,” he said. “I think it would be a great honor to walk across that stage one day.”