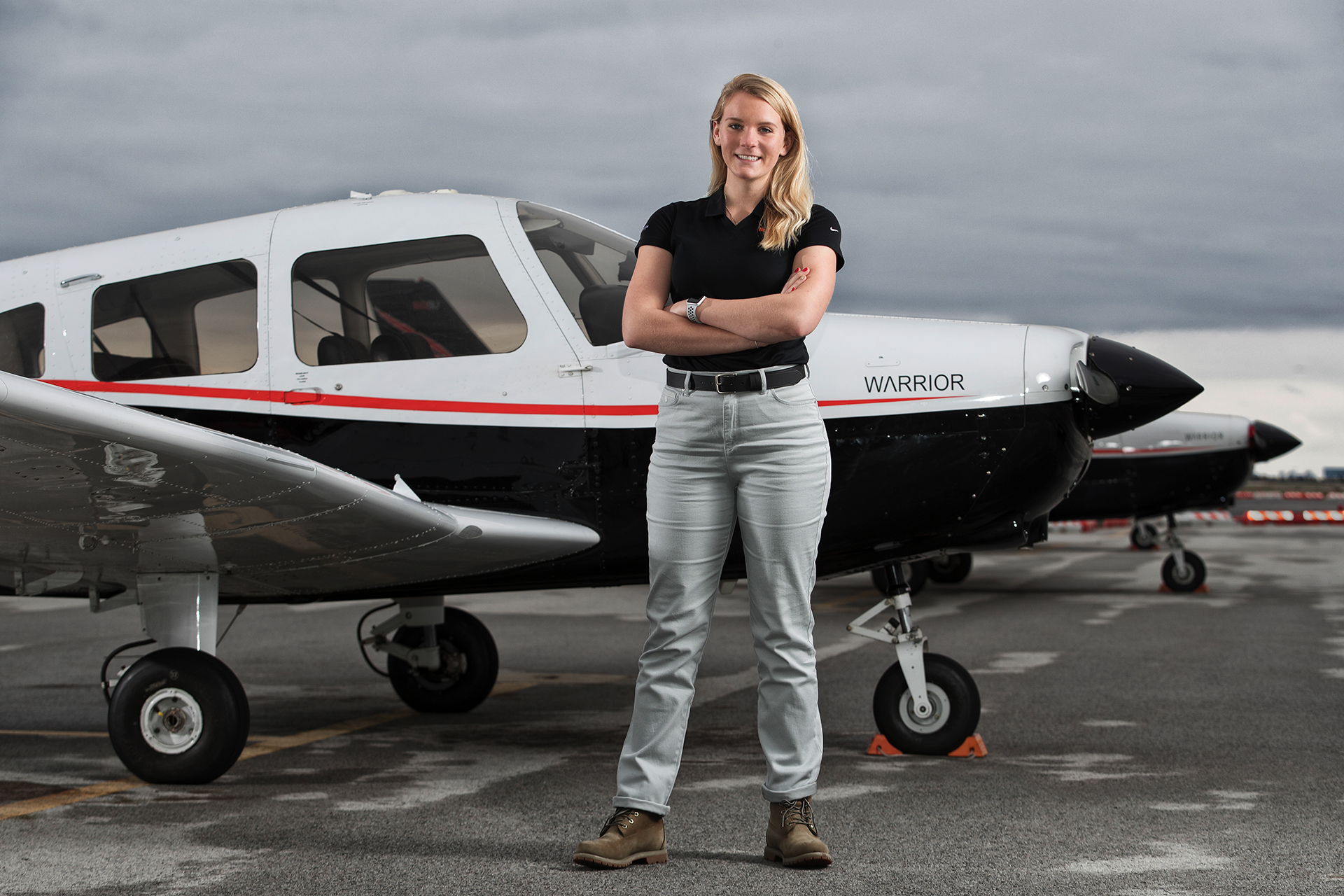 Sky is the limit for BGSU aviation major Jessica Schieberl

Jessica Schieberl has always been an ambitious student. She arrived at Bowling Green State University as a sophomore with 42 credits from College Credit Plus, but her ambitions really took flight — literally — on her first day of classes.

"I was flying in an airplane on my first day of school," said Schieberl, who is graduating with a Bachelor of Science in flight technology and operations (FTO). "From that moment on, I knew this was something I definitely wanted to do."

Schieberl, 20, a first-generation college student from the Cleveland suburb of Brunswick, Ohio, has accomplished plenty in her two and a half years at BGSU. She is graduating with a 3.9 GPA and already is a certified flight instructor (CFI) at the University. 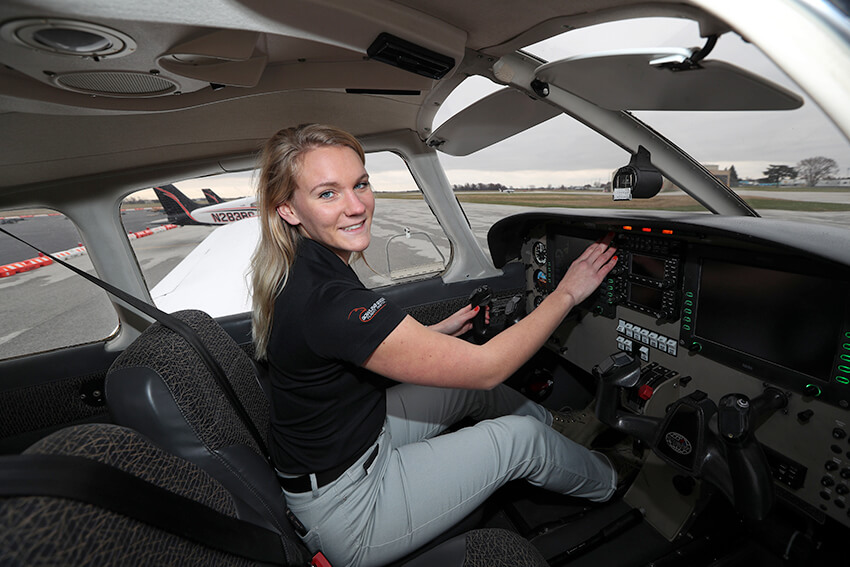 She, however, could have taken a different collegiate path had it not been for her SOAR (Student Orientation, Advising and Registration) visit.

"Originally, I was going to be a forensic chemistry major," Schieberl said. "I had no idea I wanted to be a pilot until SOAR, actually. I wandered into the wrong SOAR group because I was lost and I ended up taking a tour of the BG Flight Center and I changed my major a few weeks before school started."

Looking back, there were many more benefits from her SOAR visit.

"The campus is gorgeous," Schieberl said. "Everyone that I met was willing to help you and the food was good. I liked that I wasn’t going to be a number and class sizes are relatively small, which enables dialogue with your professor. Plus, it’s just far enough to be away and still close enough to home at two and a half hours that I could still go back and visit if I wanted to."

Aviation had never even crossed her mind until she had an opportunity at SOAR. Her tour was meaningful enough to change the flight path of her education.

"When I got to tour the Flight Center, I saw students flying their first week — and your classroom was literally in an airplane," she said. "I like to think of myself as a daring and outgoing individual and once I saw this as a possibility, I knew I was going to do it."

Schieberl liked flying so much that she decided to become an instructor.

"Because I had a head start when I got to BGSU with 42 credits, I completed all of my training of a four-year program in two years," she said. "I stayed over two summers and I got a lot of coursework and training done during that time.

"I became an instructor because I saw throughout my training how my instructors grew and built relationships with students. It was always something I wanted to do because I had a really great instructor. Cameron Condrey, my instructor from private pilot to multi-engine courses, was such a great inspiration. He’s a patient teacher and everything you’d want in a flight instructor.

"I think I finally realized for the first time that I am in this plane by myself — I am flying this airplane — and that is the most liberating feeling. Really, at that moment, other than my first flight, it just really reinforced why I want to do this and why I want to be at BGSU."

"Knowing that, it made me want to be a flight instructor too. So, I signed up for the elective of CFI and I just fell in love with teaching. It’s a great way to give back to aviation and all of the people who helped me get to where I am today."

In addition to her co-op as a flight instructor, Schieberl interned as a dispatcher at the flight center. She also served, fueled, cleaned and towed airplanes.

"Jessica has a determination within her to accomplish anything she desires," said Catherine E. Smith, chief flight instructor and faculty senior lecturer at BGSU. "She sets her focus, works with incredible diligence, reaches her goal and sets her sights higher.

"She is an incredible role model to students in the aviation program and a joy to have had the opportunity to walk alongside during her academic pursuits at BGSU Aviation."

Other highlights for Schieberl include flying to Arkansas and flying solo for the first time.

A plane needed a paint job, so along with an instructor, she flew to Arkansas and back to log cross-country time for her commercial pilot course. "We did it all in one day," she said. "just being able to get away from Bowling Green and go so far south it was great. The experience I got from that, I actually got to see some other terrain besides the flatlands of Bowling Green and talk to some different controllers — it was really cool."

Schieberl said she always will remember the date of her first solo flight: October 27, 2016.

"We were taxiing back after a flight — I was actually driving home to Cleveland that night and my mom was expecting me to be home in a couple hours — and my instructor gets out of the airplane and says, ‘I’m going to take my stuff out, but you’re not,’" Schieberl said. "I was like, are you kidding? He signed my logbook and everything and he sent me solo.I think I finally realized for the first time that I am in this plane by myself — I am flying this airplane — and that is the most liberating feeling. Really, at that moment, other than my first flight, it just really reinforced why I want to do this and why I want to be at BGSU."

For now, Schieberl wants to get more experience as a flight instructor at BGSU, and is open to working for a corporate company or a regional airline in the future. She, however, has an even loftier goal.

"If I could do something for the rest of my life, it would probably be flying for the FAA (Federal Aviation Administration)," she said. "It’s going to take a lot of work to get up to that point, but I’d like to do that."

Schieberl said BGSU offered everything she ever dreamed of in a university, and she’s so happy she found aviation during SOAR.

"I couldn’t think of a better home-away-from-home family than people at the BG Flight Center," she said. "From the day I came here until the day I leave my job as a flight instructor, I’ll always know I have family here."