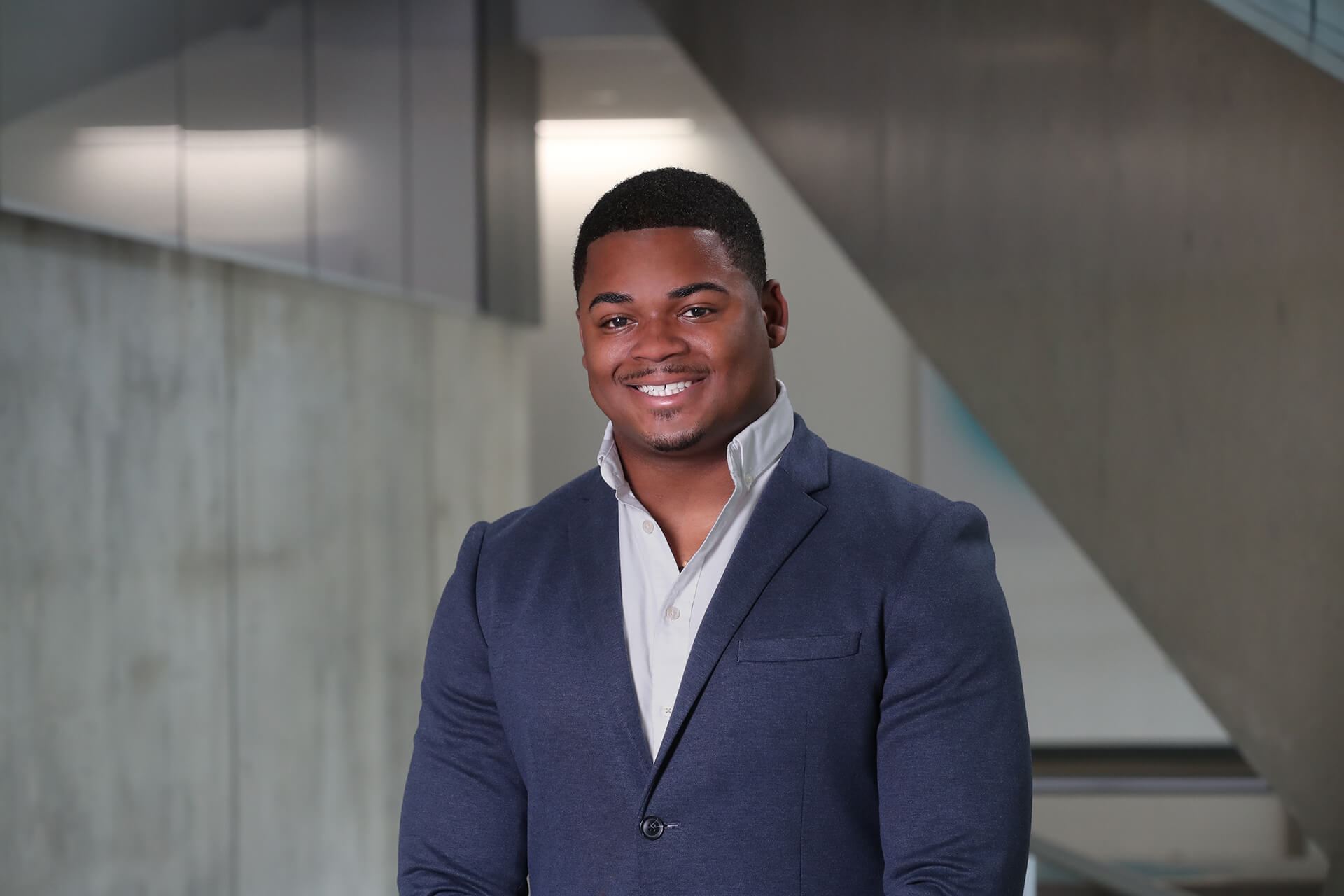 Donovan J. Greening balances the demands of running a full-service digital marketing agency and being a full-time student

Ask Donovan J. Greening to describe search-engine optimization, better known as SEO, and his eyes will light up and his explanation speeds faster than his Porsche Cayenne. When he sees your eyes glaze over in confusion, he’ll hit the brakes, slow it down and give you enough examples until you both are sharing the same road.

“Did that answer your question?” He doesn’t demean; he’s sincere in wanting to share his mastery of digital marketing and what it’s done for him, what it can do for companies behind the scenes and what he hopes it can do for Bowling Green State University.

Then he laughs and says, “I’m the nerdiest person ever. I’m a super geek!”

Greening, 20, is an entrepreneur, consultant and full-time college student. He is the founder of Greening Corporation United, a full-service digital marketing agency he started at the age of 15 that focuses on law firm digital marketing. In 2017, he helped generate several million dollars in new cases and revenue for his clients and law firms while also helping multiple victims of mesothelioma and lung cancer find justice.

A junior, he is majoring in management of information systems in the College of Business. He grew up in West Bloomfield, Michigan, and attended Brother Rice High School. While in high school, he founded two online companies. 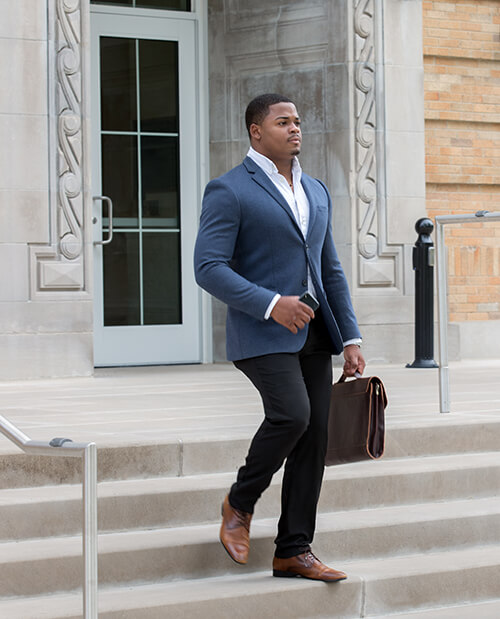 “I taught myself how to make a website based on my YouTube channel, XVSound, when I was 15,” Greening said. “I would take music artists that weren’t that cool and find cool movie clips and chop them up and make footage to kind of go along with the song, almost like mood music. That channel started to blow up and to date that channel has 3.9 million views in total and has more than 10,000 subscribers.”

That positive experience got him thinking: How could he make this into a brand? The result was XVTech, which focused on web design and social media marketing. Greening quickly turned around three local clients, a juice shop, Chris Huff from P80Fitness Studio, and DJ BJ 3525 from Hot 107.5.

His next client was a hydro light factory in Warren, Michigan, which sells hydroponic lighting for large indoor agricultural facilities.

“I developed for them a brand new website and an e-commerce system,” Greening said. “I also helped them map out a shipping logistics system to make their business more efficient. That business had made over $600,000 of revenue two months after launching that website. Then, I was like, OK, now I can actually make people some money.”

It was about this time that Greening enrolled at BGSU, which he said was perfect because, “I wanted to get away from home, but not too far from home. And it’s a university my mother is really happy with, and only 90 minutes from home. Plus, there are few distractions.”

Once he arrived at the University, he decided to delve deeper into online marketing. Now, Greening Corporation United specializes in online marketing and rankings as well as public relations and content creation for law firms and large corporations.

One of Greening’s clients is Goldberg, Persky, and White P.C., a national mesothelioma law firm specializing in mesothelioma and asbestos litigation. He began to work with one of their managing partners while he was only 19.

“This firm had never run large advertising campaigns other than some TV spots,” Greening said. “Lane Clack is a nationally recognized mesothelioma lawyer and managing partner of Goldberg, Persky, and White. Having done hundreds of millions of dollars in legal case work, Lane was not an easy man to impress. It took months of hard work and dedication to bring their firm to top spots in Google and help victims of asbestos exposure get the compensation they deserve.”

He started working with Clack during his freshman year and signed a contract for $55,000 out of his Centennial Hall residency to develop and rank in Google a 5,000-page website and asbestos exposure jobsite database.

“There were a lot of multimillion dollar law firms outranking my client online, and, honestly, I didn’t know if I would be able to do it,” Greening said. “But two months later, I was able to beat every one of them with the new website I built for the firm. I did their commercial, their press release content, I write their blog posts — I’m pretty much a full-suite marketing solution for them, and I automate the online presence of the firm. Since then, they’ve expanded their website into other states and my company signed a new contract with them worth several hundred thousand dollars to begin to market the firm nationally.”

“Donovan Greening has helped us dominate our Michigan and West Virginia markets,” Clack said. “From his digital marketing efforts, we have seen several million dollars in new claims being filed with our firm.”

Greening says he often feels like Bruce Wayne with two identities, being a full-time student while working to achieve his personal and professional goals with his company.

“Focusing on business and balancing business with school is very difficult,” said Greening, who recently picked up a local Stanley Steamer franchise as a client. “Within 15 minutes, I could be jumping on the phone with an attorney or another executive and I need to be a high-level consultant very quickly. But when I am back in my dorm, I get to be a kid again. It’s very interesting, this double life I’m living right now.”

Greening says it’s hard to connect with his peer group, and not just because he is working full time and earning a large income while also being a full-time student. He remains very career focused and doesn't have time for some college activities, which is hard for some of his peers to understand.

In using SEO to get his clients to be highly ranked, Greening combines his computer skills with his business acumen. He says a lot of companies don’t realize how important SEO is to their bottom line.

“If you get a Michigan personal injury law firm ranked high in Google for a keyword like Michigan auto accident lawyer, it’s very valuable to him and his clients,” he said. “Something like that is universally applicable to just about anything: auto insurance, buying a house, schools, online degree programs, appliances, whatever.”

Greening currently is seeking more law firms that would like to be ranked in the top spots for their state in a practice area of their choice.

“Companies have to design their websites with SEO in mind, and if they don’t understand this critical feature, they’re going to miss out on a lot of business,” he said. “Most people are on their phones all day long and they’re going to do a quick search and go with whatever is the most convenient. Being on Page 1 is where they are going to turn to because they don’t really second-guess those rankings. A lot of companies that deserve to be at the top are on the back pages because they don’t really understand how people are searching for their products.”

Eventually, Greening wants to have a small, agile firm in which “I work with some of the top brands in the world while at the same time doing something beneficial — something that adds to the value of people’s lives and makes them No. 1.”

The networking he’s done and the business connections he’s made at the University have been priceless, Greening said.

“The upper-level connections I’m making with people like President Rogers and others, I believe will really help me out, not only with growing my business but also in helping me develop as a young man,” he said.

“I’m still trying to find myself, but I’ve solidified what I want to do and I’m running as fast as possible to accomplish my goals. I’ve not slowed down at all. It’s cool making connections with faculty because just talking to them you learn a lot more. One of the best connections I’ve made is with Dr. Gene Poor. I love that guy and really look up to him.”

Poor, the Hamilton Endowed Professor of Entrepreneurship emeritus, began the visual communication technology program at the University, teaches in the entrepreneurship program and is the founder of LifeFormations, which makes animatronic figures for museums, theme parks and other venues.

“It’s taken me 50 years to have a student like him,” Poor said. “He’s aggressive, passionate, persistent and full of energy. He’s an amazing young man; one in a million. He’s so interesting in terms of how he thinks. I have him speak to my classes and it’s like having a 50-year-old business man speak to a bunch of 19-year-olds telling them about the world of business.

“Donovan understands things that most young people don’t understand. He has a unique perspective about work and what he can learn from the University. He takes this whole experience very seriously.”

Greening would like to demonstrate to his peers that if he can start his own business and be successful then they can, too.

“My goal is to help Bowling Green State University become the school for young entrepreneurs,” he said. “If we could become the go-to university for entrepreneurs in the Midwest and beyond, that would be awesome.”