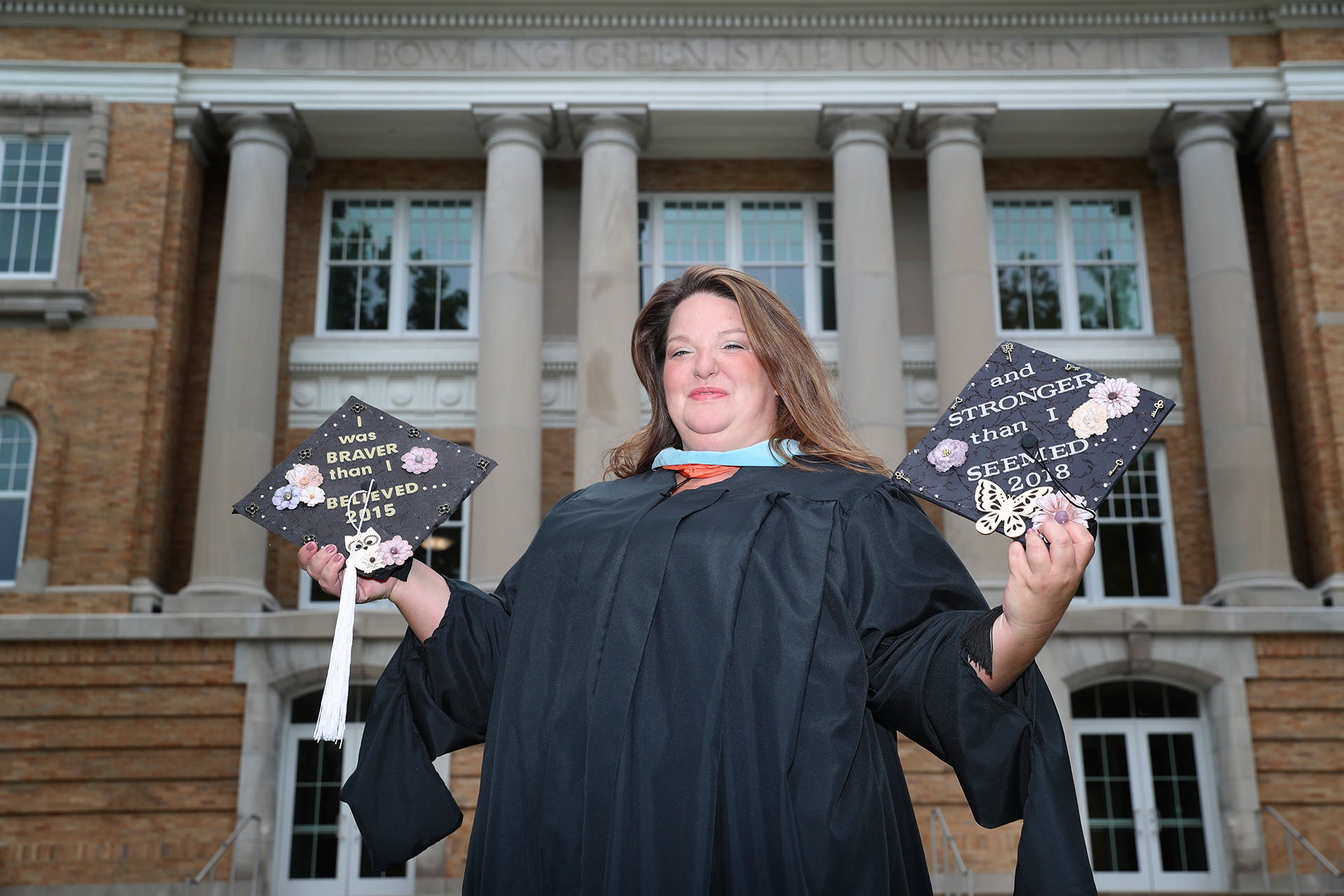 “I visited with a family friend when I was about 6 and decided then that this was where I wanted to go to college,” Stone said.

She enrolled at BGSU straight out of high school, and as a first-generation college student she was excited to start this new chapter.

“Maybe a little too excited,” Stone said, laughing. “I took 18 credit hours that first semester, which was way too much when I still worked 60 hours a week.”

College life was harder than she had anticipated, and not having friends or family to answer questions along the way made it even harder.

“I went from a straight-A high school student in high school to totally bombing my first semester in college,” Stone said.

She decided to take a year off to regroup and save some money for future semesters.

Then came marriage. And children. And a need for immediate income. That “one year off” became 20 years.

But Stone held on to her goal of getting a degree from BGSU, even when it seemed unrealistic.

“There were so many reasons I shouldn’t have ever come back," she said. "I was a single mom of three boys with special needs, and they were all very active in school. I lived 30 minutes away from college. I worked full-time.”

Despite those challenges, she decided that she needed more from her paycheck.

A college degree was the first step toward a better job, but BGSU felt different when she returned.

“I actually had a panic attack the first time I came back to campus," Stone said. "My youngest son wasn’t even a year old, and money was still an issue; there just aren’t many scholarships out there for non-traditional students, and I didn’t have much money to start with.”

Then there were her own barriers.

“I didn’t have much self-confidence and I didn’t think I was worth anything," she said. "I wasn’t sure I could do this, but I knew I wanted to do it.”

It took a lot of hard work and serious time management skills, but by taking classes online at BGSU, she was able to continue working, to spend time with her family and to make progress on that bachelor’s degree.

Stone completed a bachelor’s degree in liberal studies, but she wasn’t finished.

“I had started substitute-teaching in my sons’ school district,” she said, “and I was assigned to a classroom working with kids who have disabilities.”

After having three sons with special needs, she didn’t think she was prepared to make a career of working with more students who have disabilities.

“But when I got in that classroom, I realized that this was what I wanted to do," Stone said. "I’d been ‘training’ for it for 17 years. And I needed to get another degree so that I could use those skills as my profession.”

Stone re-enrolled in her alma mater and completed her master’s degree in special education in mild to moderate disabilities — again completing classes online.

As a licensed intervention specialist, she has already started her new career, working with young adults who have disabilities and teaching them how to live independently.

“One of the challenges they face is ‘generalizing skills:’ taking something they learned in a classroom and applying it to situations in their own lives,” she said.

This is where Stone helps with what she calls her dream job.

“I teach them to become more independent so that they can do things that other people might not even think about,” she said.

Stone uses an example of planning an outing with friends. That’s easy for many people, but it includes small, variable steps which can be a challenge to people who have disabilities. They need to gather schedules. They need to set a date and time that will work for everyone. They need to decide what the group will do. And they need to figure out how everyone will get there.

“Mastering these skills, plus things like cooking, cleaning and dressing appropriately, helps them live independently,” Stone said, “instead of depending on other people.”

Looking back, Stone said a lot has happened since she was a 6-year-old on BGSU’s campus, deciding that this was where she wanted to go to college when she grew up. Even though she never could have predicted all the twists and turns, she had only encouragement for other adults who might be considering a college degree later in life.

“Getting my degrees from BGSU is one of the greatest things I’ve ever done,” she said. “I decided that I would not be in a job I hated for my whole life, and I would still be a mom. I’ve used, I think, all the resources on campus to help get things done. But I want other people to know that they can do this, and they are not the only ones out there getting it done.”