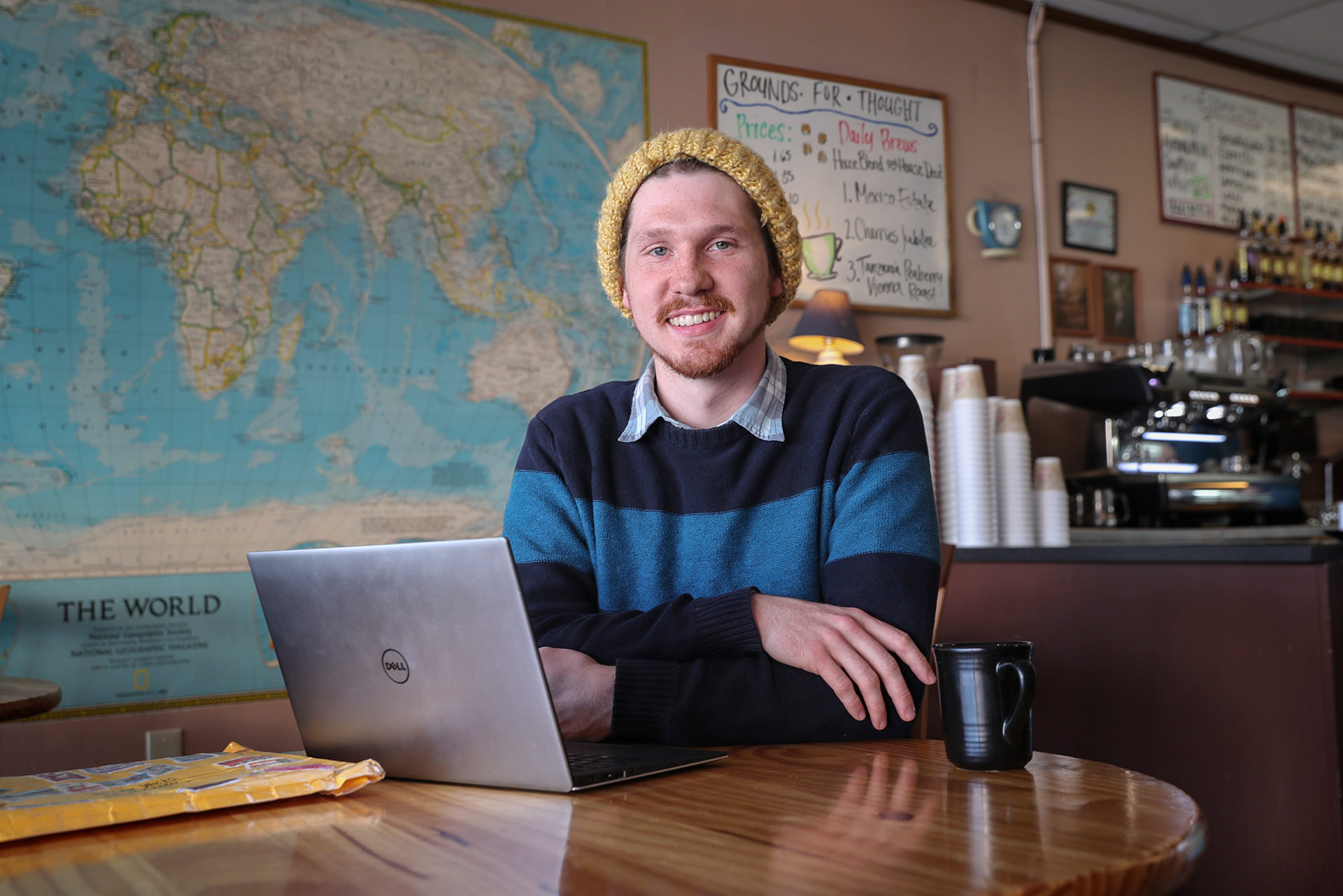 Double major is walking his own musical path

To many, the sounds of cars driving down a street or wind rustling through the trees may be background noise. To Declan Wicks, these sounds can help define a city, and they have also helped to define his time as a student at Bowling Green State University through his honors project and time in the Stuart R. Givens Memorial Fellowship.

Wicks, a Bowling Green native, is graduating with degrees in world music and international studies.

Having previously studied trombone with Dr. William Mathis, now Dean of the College of Musical Arts, he was made aware of the World Music program offered at BGSU. Very few undergraduate programs are offered in World Music, also known as ethnomusicology, and in Wick’s words, ethnomusicology “explores the connections between culture, music and identity all around the world.”

After becoming a World Music major, following a year of studying music education, Wicks decided that he was interested in the humanities as well, which lead to the addition of the International Studies major.

One of the requirements of the International Studies program is to complete a study abroad. This was not a problem for Wicks, as BGSU’s strong study abroad program was one of the big attractions of the school. During his time as an undergraduate student, Wicks was able to study abroad twice.

The first time Wicks studied abroad was the fall semester of 2016, where he traveled to the Netherlands to study at VU University Amsterdam. In deciding where to study, Wicks wanted a new experience that would tie in well to his majors.

“Within international studies, my main focus has been in sustainable development,” he said. “I want to look at how countries have opportunities to create futures and development for future generations.”

The Dutch education system allowed him to dive into his studies because there was more of a focus on open discussion in the classroom rather than the “traditional busywork of education in the United States,” according to Wicks.

His next opportunity to travel the world came not long after his semester abroad, when he was awarded the Givens Fellowship.

“The two main things that exemplify the Givens Fellowship program is that you cannot use anything completed during the fellowship for class credit, and you need to be able to answer the question ‘What would you do if you could do anything?’” he said.

For his project, Wicks combined his international studies and world music majors into something more cohesive, influenced by his second language of Spanish. Wicks said that the Givens Fellowship “pushes you to do something you would never be able to do while in Bowling Green, Ohio.”

For his project, Wicks looked at the Camino de Santiago pilgrimage in northern Spain. He was introduced to this pilgrimage by his freshman roommate, and remained on his radar until the opportunity came with the help of Dr. Mary Natvig in the College of Musical Arts. Over the 500-mile-long trail, a big problem that has interfered with the experience is the soundscape that has been marred by traffic and pollution. A field of music studies is soundscape studies, which looks at the sound around us in the world and how it influences our lives. For Wicks’ project, he wanted to see how the sounds around the pilgrimage affects the identity of the trail.

Over the summer of 2017, Wicks spend a month and a half walking the Camino Francés, also known as the French Way, which is the most popular route for the ancient pilgrimage. It begins at Saint-Jean-Pied-de-Port in France, leading to Santiago de Compostela, running through major cities such as Pamplona, Logrono, Burgos and León. All along the route, Wicks collected sound samples in order to try and create the unique soundscape of the trail. For his final presentation at the end of the summer, he created a map with GPS coordinates of various sounds that he heard along the trail.

“The most ubiquitous sound I heard along the trail was car noise by a large factor, with birds being the next highest amount” he said. Other factors that made up the “sonic soundscape” included factories along the trail, airplanes and other tourists.

Back in Bowling Green, Wicks decided to tackle a similar task for his Honors Project. He wanted to take his mapping sounds theory, and apply it to the city of Bowling Green. With the help of advisers Dr. Sidra Lawrence and Dr. Clayton Risoti, Wicks worked to collect sound samples and compare them to census data of the city.

“In urban cities, with Bowling Green being an urban cluster, spaces seem to have been developed in specific ways based on institutional racism and class divide,” Wicks said.

Some questions that he looked at included “why do students typically live on the side of town closest to I-75?”; “Why is the lower income area on the north side of town close to the airport?”; and “Is there a reason why four of five parks in Bowling Green on the west side of town?”

Wicks is very interested in seeing how music can serve as a form of development for communities, and the experience of the Givens Fellowship and Honors Project have served as a foundation into looking at this idea.

After graduation, Wicks does not have any concrete plans.

“There is no set path that I want to follow,” he said. “I want to create my own path moving forward.”