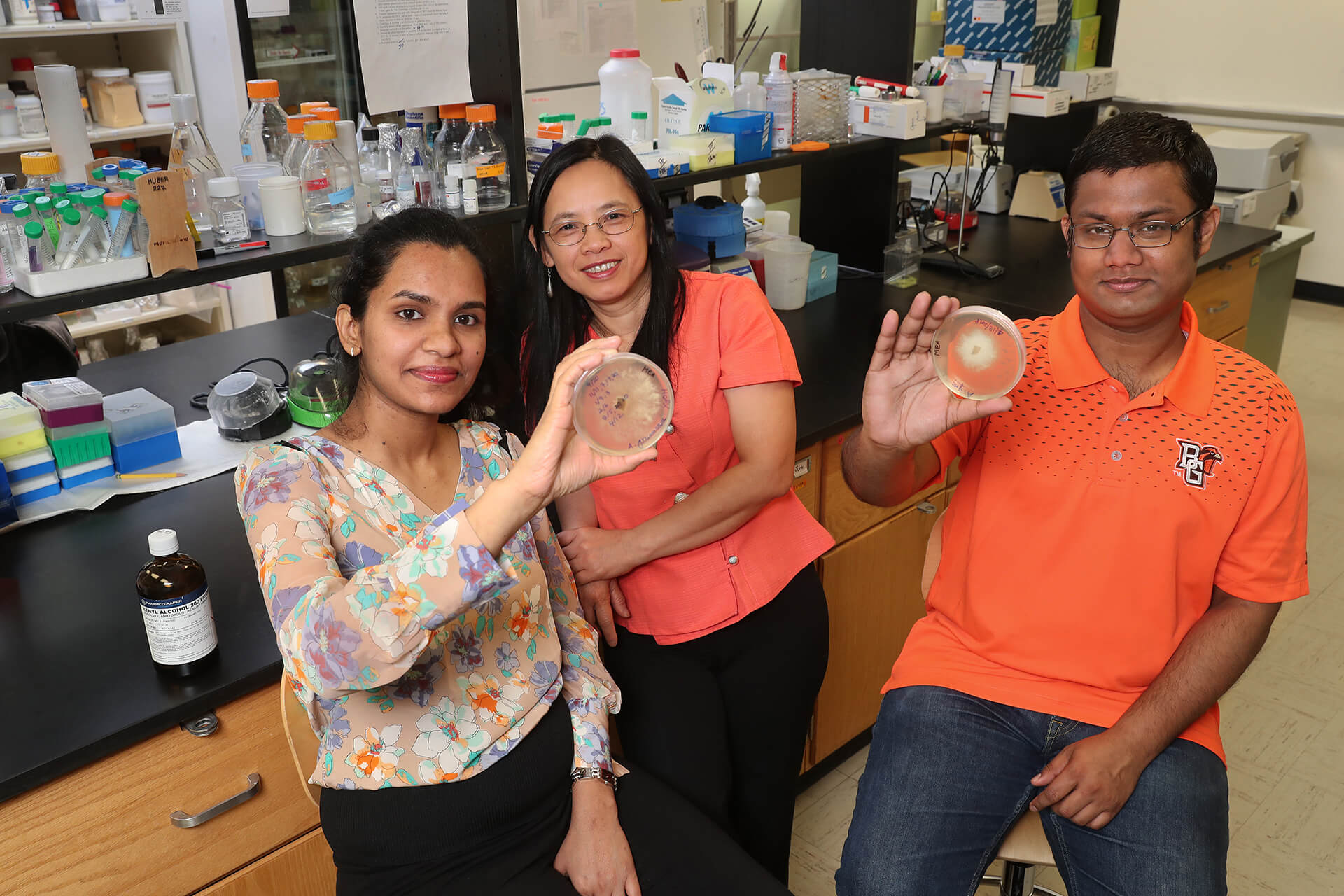 A new insight into the beetle-fungus symbiosis

Dr. Vipaporn Phuntamart, an associate professor in biological sciences at BGSU, and doctoral students Gayathri Beligala and Satyaki Ghosh contributed to the paper “Symbiont selection via alcohol benefits fungus farming by ambrosia beetles,” which was recently published in the Proceedings of the National Academy of Sciences.

The beetle research, headed by an entomologist Christopher Ranger of USDA-ARS, discovered that alcohol, specifically ethanol, is important for the beetles’ food production, and part of the logic for their attraction to alcohol. Drawn to the smell of alcohol, the beetles can be found, not only floating in beer glasses in a beer garden, but also in weakened trees such as dogwoods and redbuds that produce alcohol.

Additionally, these beetles are “true fungus farmers that propagate, cultivate and sustainably harvest their fungal gardens,” the paper states. In this symbiosis, the beetles farm the fungus as a food source for the larvae, while the fungus uses the beetle as a mean of dispersal and survival. The beetles are host to the fungi and the fungi provide a food supply for the larvae and the adult beetles.

Phuntumart, Beligala and Ghosh helped determine that the presence of alcohol in the weakened trees promotes the growth of fungus.

The BGSU team’s contribution initiated from a scientific discussion on Ranger's research presentation at BGSU about ambrosia beetles’ attraction to alcohol. Ghosh asked if they had considered if the alcohol also benefited the fungus. As it turned out, there was no evidence that that research had been done.

“That is what happens when people from different fields talk, with different expertise; people see things differently,” Phuntumart said. “Before that time, the entomologists who had been doing this work for a decade didn’t think about the connection between the alcohol and the fungi.”

Because she and her team had the expertise and technique to do the research, they were asked to collaborate and to run that part of the experiment.

Ranger’s group “sent us the sample, and we tested it and found the fungus does like alcohol,” she said.

“They grow happier; they make more and they grow, increasing their biomass,” Beligala said.

“We can’t tell if they (the fungi) are bigger or taller, but when we weighed them, they weighed more,” Phuntumart said.

“That is what happens when people from different fields talk, with different expertise; people see things differently.”

The significance of the research, in part, may help reduce the destructiveness of the beetles to the dogwood and redbud trees, Ghosh said.

“We found when these trees are stressed they make ethanol, and this ethanol is used as a signal by these beetles to find a tree that is more susceptible to getting attacked,” he said.

“That benefits the beetle in two ways,” Beligala said. “An alcohol concentration of about 1 percent creates an optimal environment that benefits the ambrosia fungus (food source) but also inhibits the growth of many detrimental microorganisms.”

While this research is not the main focus of the Phuntumart lab, the researchers are considering doing genome studies to see what genes are involved in terms of the interaction between the beetle, fungus and tree.

“The fungus has to have very powerful enzymes if they are able to form tunnels in trees,” she said. “If we could identify the gene associated with making tunnels, we could engineer the gene from the fungus to actually help us in producing biofuels. Doing the genome work is our interest and a future goal.

“This just proves that collaboration is an important part of discovery. “We are proud to be part of a new area of research, and it’s all because of this collaboration.”