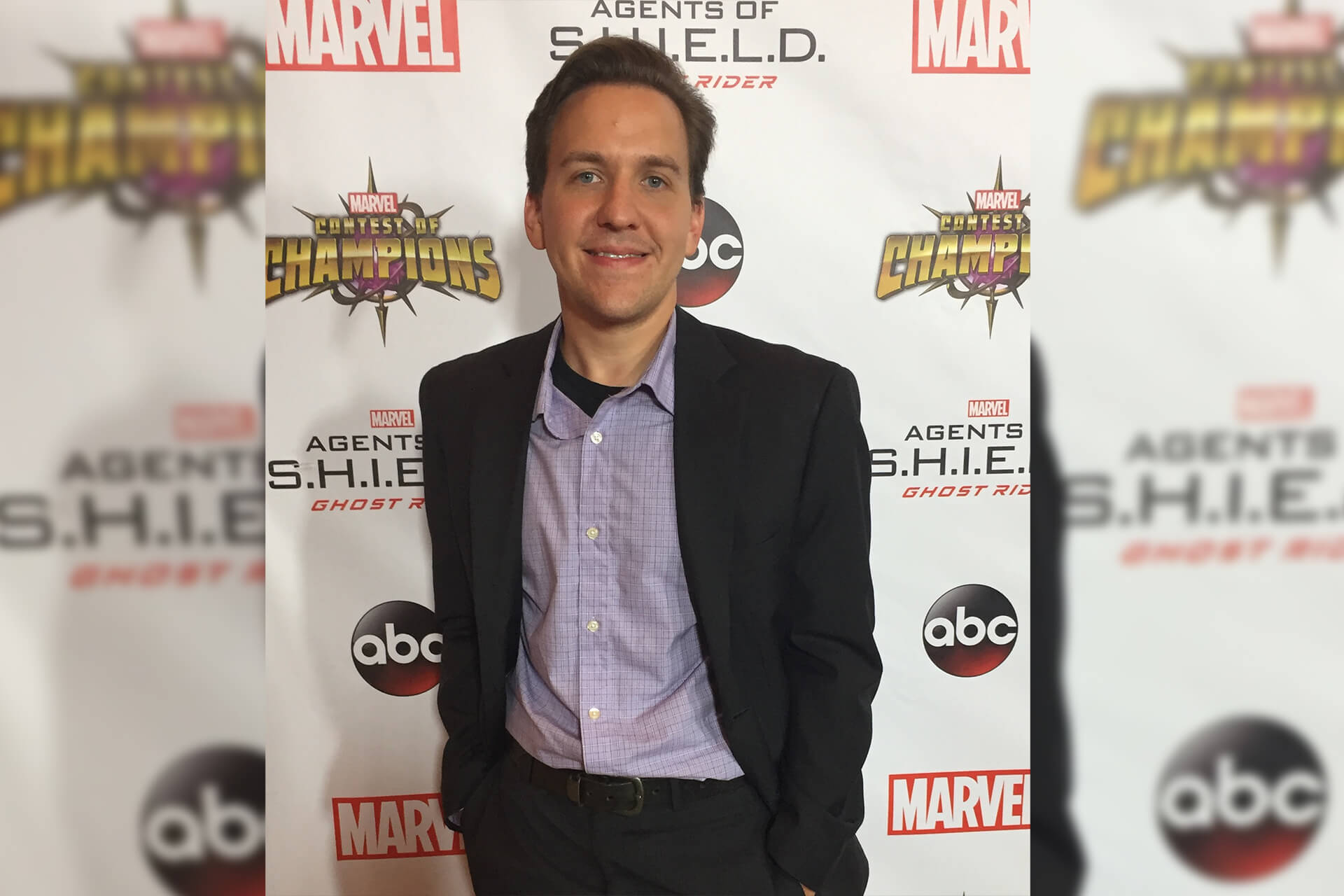 Bowling Green State University alumnus Marc Sumerak, perhaps best known for his work in the comic book industry, is flexing his creative muscles by digging deeper into his favorite pop culture worlds. He has done so most recently through “The Art of Harry Potter,” a coffee table book published by Insight Editions in November as a Barnes and Noble exclusive.

Sumerak, a Solon, Ohio, native and 2000 BGSU graduate, provided the text that accompanies the book’s art, which spans the production of all eight Harry Potter films.

“When I signed on, I had no idea how physically huge the final book would be,” he said. “It’s a massive tome that looks like it belongs on Dumbledore’s shelf, and every page is packed with some of the most beautiful art I’ve ever seen — and some of my words here and there, too.”

Sumerak has worked on several other projects with Insight Editions, which featured “explorations into the worlds of some of pop culture’s greatest franchises,” including Marvel Comics, "Ghostbusters," "The Walking Dead," "Firefly" and more.

One of Insight Editions’ editors asked him if he was a Harry Potter fan and then offered him the book.

“Who isn’t?” Sumerak said. “The original books are so well crafted, and the films did an amazing job of bringing them to life in a way that so many adaptations fail to achieve. The franchise really defined a whole generation of pop culture, and I’m honored to add even a tiny piece to that legacy.”

Sumerak said fans of the franchise will love the art in this new book.

“The title says it all. This is ‘The Art of Harry Potter,’ and the art is the star of the show,” he said. “I believe this is the first time that concept designs from all eight movies have been published together in a single volume, so that makes this a really special project for hardcore fans. And a lot of the art has never been seen before in any book, which is also pretty spectacular. There’s just so much to absorb on every page of this book that it’s pretty easy to fall under its spell.”

Sumerak’s favorite section of the book explores the graphic design work featured in the movies.

“Stuff like the newspapers, the book covers, the posters, and the product packaging that exist within the Wizarding World,” he said. “Some of this art is seen onscreen for only a fraction of a second, but it all had to be meticulously designed to fit within this universe and make it feel fully realized. It’s really astounding to see the care that designers Miraphora Mina and Eduardo Lima put into making sure that every piece of this world fit together seamlessly.”

Up until about 2014, Sumerak’s work was almost exclusively in the comic book industry. Since then, he has branched out into special projects.

“I’ve really started to focus less on monthly comics and more on special projects that dig deeper into my favorite pop culture worlds,” he said. “I’ve written detailed visual histories, travel guides for fictional universes, tech manuals for ghostbusting gear, video game narratives, and I’ve even contributed to a themed cookbook. Flexing all these different creative muscles has been wild and fun and keeps me excited about writing.”

While it’s hard for him to choose a favorite project from over his career, he does have a few.

“Pretty early in my studies, I realized that I didn’t want to teach English, I wanted to make it.”

“I pour my heart into these projects, so they each have a little piece of me in them,” he said. “When it comes to comics, I did a fun book called ‘Machine Teen’ back in 2005 about a perfect teenager whose life unravels when he realizes that he’s a prototype artificial construct. One of the characters from that book, Holden Radcliffe, went on to be a regular character on the ‘Agents of S.H.I.E.L.D.’ TV show. So that was pretty cool.

“I also love working on video games, which I’ve been doing a lot these past few years. Right now, I’m providing new story content for the popular mobile game ‘Marvel Future Fight.’ It’s a real blast getting to combine my love of comics with my love of gaming and to see so many fans having fun playing the stories I helped create.”

In addition to his work on “Marvel Future Fight,” Sumerak is getting ready to release his next big book and writing.

“I’m writing two different projects designed to give fans an in-depth look into the cult-favorite sci-fi series ‘Firefly.’ The first is a crew manual that explores every inch of the ship, Serenity, from the perspective of the crew members themselves. The other book is a travel guide to the ‘Verse – the distant collection of stars and planets where the series takes place. Both of these were a blast to write and I think fans will really dig them.

“Beyond that, my other projects are still top secret, but they include some really exciting video game work as well as a book that will be my first time writing for one of my favorite franchises. As soon as I can talk about them, details will be posted on my website.”

Sumerak graduated with a bachelor’s degree in creative writing. Although he originally chose the University for its education department, it was a natural change.

“Pretty early in my studies, I realized that I didn’t want to teach English, I wanted to make it,” he said. “I had tested out of a lot of gen ed courses because of AP classes in high school, so I was able to dive into a lot of 200 level courses in my first semester. Fortunately, one of those was an English course called Craft of Fiction. It was a great balance of literary analysis and applied writing that really opened my eyes to how much I loved just putting a pen to paper and creating. Before the semester was over, I had changed my major to Creative Writing, which I didn’t even realize was a major before I came to campus. Fortunately, BGSU has a fantastic writing program.

As it turns out, I had been in the right place all along, just for totally different reasons.”

While at the University, Sumerak was involved in the Honors Program, the undergrad literacy magazine Prairie Margins and Men’s Chorus.

“When it came to classes, I had a long list of instructors that inspired me on a daily basis and pushed me to be a better writer,” he said. “I also made lifelong friends who were in the trenches of the writing program with me — folks who weren’t afraid to tell me when my stories weren't any good and how to make them better. They’re still the people I trust most for an honest opinion, both on writing and in life, 20 years later.”

While at BGSU, he also secured an internship at Marvel Comics that turned into a full-time job after graduation.

“I always loved comic books, even going so far as to create my own online comics with my best friend from high school during the early days of the Internet, which we continued to publish throughout my time at BGSU,” he said. “I found out about an internship at Marvel Comics early in my college career, but when I inquired about it, I found out that they only accepted juniors and seniors, so I tucked it in my back pocket and saved it for later. When the time finally came, I was lucky enough to be a semester ahead in my studies and met all the other requirements. Rather than graduating early, I decided to take a chance and apply for the gig. Much to my surprise, I got it and spent a semester in New York City during the spring of my junior year.

“As much as I loved reading comics prior to that, the internship was the thing that really showed me that I needed to make them for a living. I loved everything about the experience — even when I was just making copies or sending out mail — and learned so much about the industry from the legendary professionals all around me. It really was my dream job and, without that internship, I might never have had the chance to make it a reality.”

As an assistant editor at Marvel Comics, the job he started a week after graduation, Sumerak “worked on the Avengers line of titles, including Iron Man, Thor, Black Panther, Captain Marvel, and many more of today’s most recognizable characters.”

After about four years, he became a full-time freelance writer, a career he said BGSU prepared him for.

“More than anything, BGSU’s creative writing program taught me how to properly evaluate a story on a number of different levels — from simple grammar to theme and structure — a skill set that was essential as a fiction editor, and is still essential as a writer,” he said. “Every story is subjective. It’s personal art. So being able to examine it with a fair critical eye is something that takes some training. It’s so much more than just saying ‘I liked it’ or ‘I didn’t like it’. You have to know why you like it, and to do that, you have to understand the underlying pillars of storytelling that make a piece of fiction work and how they can be applied in unique and exciting ways. The BGSU creative writing program not only taught me how to find the flaws in a piece, but how to help strengthen them. It is a skill that I still use every single day of my life.”