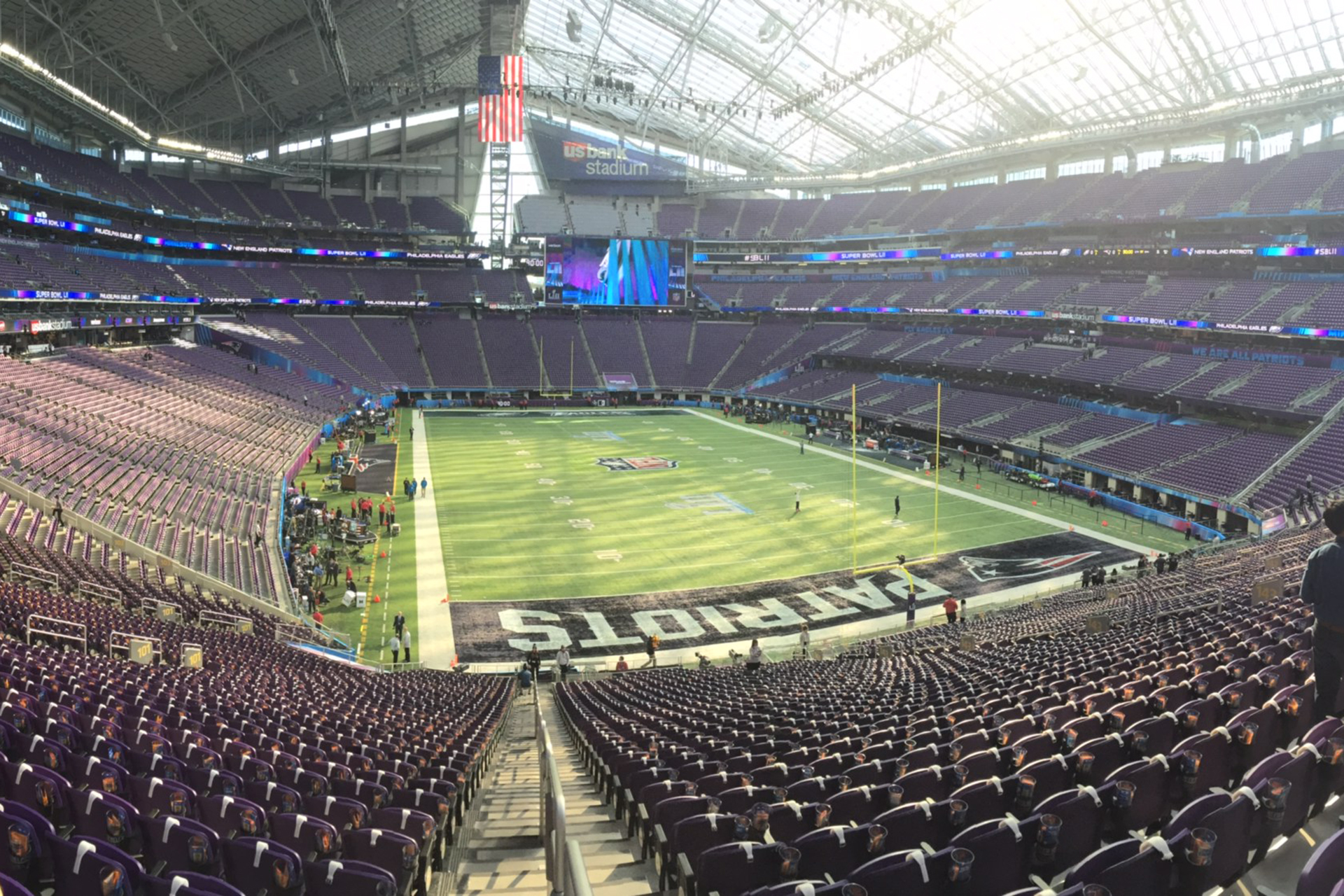 A group of 32 students spent a week volunteering in Minneapolis

The Philadelphia Eagles weren’t the only winners at Super Bowl LII in Minneapolis.

A group of 32 students from Bowling Green State University’s Sport Management Alliance (SMA) spent the week leading up to the Super Bowl at the Convention Center in Minneapolis volunteering at the NFL Super Bowl Experience, an annual family-friendly event. The SMA contingent also helped fans find their seats and access to VIP clubs at U.S. Bank Stadium on the day of the big game.

“It was just really cool being in the city for the whole Super Bowl week and seeing how the entire city revolved around it,” said Brian Lobban, a junior sport management major from Medina, Ohio, and president of the SMA. “Minneapolis put on a great show, but what I’ll take away most is when the clock hit zero and the Eagles won it and the entire stadium went quiet. There was no sound in the stadium at all. I think it was the Eagles thinking did we just win the Super Bowl and the Patriots not believing they just lost to the Eagles.

“Plus, seeing the Eagles celebrate on the field was pretty special. It was their first Super Bowl title in franchise history so it was great to see their reaction.”

For Lindsay Klemm, an MBA candidate who graduated with a sport management degree in 2017, it was the second time she volunteered at a Super Bowl. She made the trip to Glendale, Arizona, for Super Bowl XLIX when she was a freshman.

“The best moment for me was seeing the little kids when they succeeded at the games because the smiles on their faces were contagious,” said Klemm of Charleston, West Virginia. “Just being there and helping them made it all worth it because you got to enjoy your time and help them enjoy their experience at the Super Bowl.”

Dr. Amanda Koba, the faculty advisor for the SMA, said the students got a lot more than just a fun trip to Minnesota.

“As their advisor and their professor, I try to stress to them that you get a line on your resume that says ‘Super Bowl,’” said Koba, who pointed out that the SMA also has worked Mid-American Conference and Big Ten football championship games as well as NHL All-Star games. “That is a 100 percent guaranteed conversation piece for a lot of people. Also, I stressed to talk to as many people as you can while you are there to start the networking process; imagine the entire week you are there that you’re on a job interview.

“Honestly, I would rate my experience at BGSU a 10 out of 10 because I’ve gotten so many opportunities."

“That’s the best way to approach it and that’s how they did approach it. They were there to work; it was a business trip. They not only represented themselves but also the program and BGSU. They really did handle themselves in a remarkable manner, and I’m really proud of what they were able to accomplish while they were there.”

Lobban said he is looking forward to having his Super Bowl experience potentially unlocking some doors after he graduates from BGSU.

“It’s going to be awesome,” he said. “Especially in our industry, just seeing what all goes into an event like the Super Bowl and seeing all the preparation that goes into it is priceless.”

Volunteering at the Super Bowl in Arizona already has paid dividends for Klemm. She interned at Ripken Baseball in Myrtle Beach, South Carolina last summer.

“When I applied for my internship this past summer, the first thing they noticed on my resume was the Super Bowl,” said Klemm, who worked in operations at Ripken. “Asking me about my experience and what I did at the Super Bowl ended up being a big part of the interview. So, it definitely helps to have a huge event like that on your resume.”

Lobban said the SMA did a lot of fundraising over the past year to be able to pay for the trip to the Super Bowl.

“We stayed after BGSU football games and some hockey games to clean up the stadiums, and we were able to raise money through that,” he said. “We also had fundraisers at local restaurants like Buffalo Wild Wings, Qdoba and Chipotle, and we worked concessions at football and hockey games. Each member had to pay a small fee, but it was very minimal compared to the budget we had.”

Lobba and Klemm both said they chose to attend BGSU because of the University’s sport management program.

Klemm has worked the past two football season as an operations assistant, helping with travel, hotel and meal contracts.

“Working in football operations is something I ultimately want to do right when I get out of school, but somewhere down the line maybe I’ll step into an athletic administration-type role,” she said. “Honestly, I would rate my experience at BGSU a 10 out of 10 because I’ve gotten so many opportunities. Yeah, I’ve had to step out of my comfort zone, but you’re going to have to do that out in the real world with any job you get, but especially in the sports industry because it’s all about networking.

“I think Bowling Green has really helped me get these opportunities and gather real-world experience to help me figure out what I want to do for a career.”