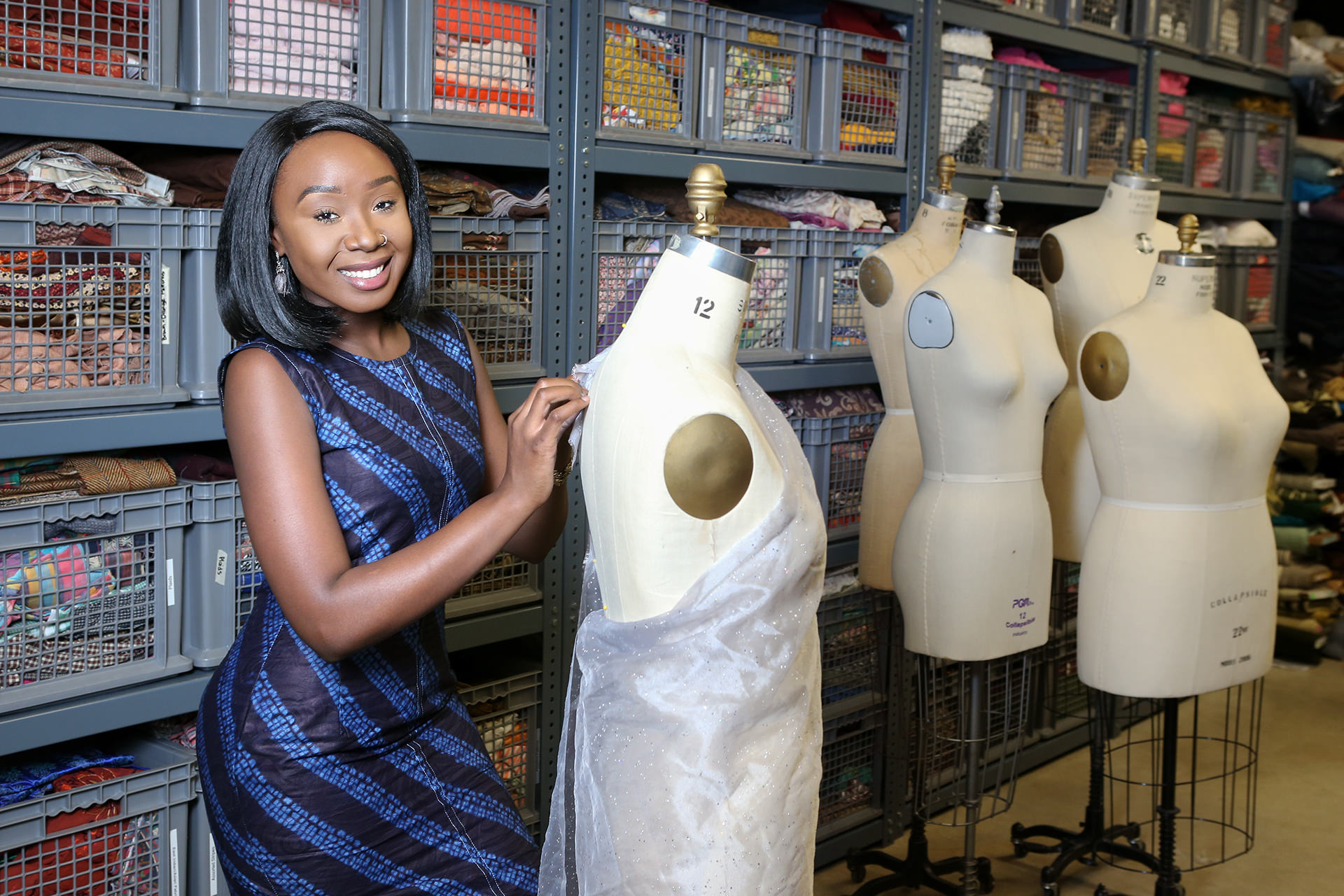 Fatima Camara has come a long way – literally and figuratively – from her home in West Africa in pursuit of a successful career as a fashion designer and entrepreneur.

Her path from the small, agricultural-based country of Guinea to Bowling Green State University was marked by sacrifice, hardship and perseverance. But after moving across the world in search of opportunity and earning her degree in apparel merchandising and product development from the College of Education and Human Development, Camara is ready to take the fashion world by storm with her innovative designs that pay homage to her West African heritage.

Although Camara was born in the United States, her parents are from Guinea, where she was raised from the age of 3. But with one of the lowest literacy rates in the world, ongoing political turmoil and limited job opportunities, her parents made the difficult decision to send her to live with family in France when she was just 10 years old. Hoping to find her piece of the American Dream, Camara then moved by herself at age 16 to Columbus, Ohio, where she moved in with her older brother and enrolled in a local high school.

“I come from a very humble background,” Camara said. “Guinea is a third-world country. Very poor. Growing up in such an environment made me realize that I want better for myself and to keep pushing forward.”

Her will to succeed helped Camara overcome one of her largest hurdles upon arriving in the U.S. – learning English.

“I did not speak any English when I arrived here,” Camara said. “But because there were people mocking me because I didn’t know how to speak English, that encouraged me to learn.”

Camara’s ELS classes helped her grasp what she needed to know to be able to understand her homework, and when she got home each day, she would immerse herself in America music and TV.

“I was fascinated with American culture,” said Camara, recalling how she picked up more English from watching popular TV shows and listening to singers like Beyonce and Rihanna. “I remember listening to the music and then Googling the definitions.”

Having dreamed of creating her own clothing line for as long as she could remember, Camara was immediately drawn to BGSU’s apparel merchandising and product development program when she began her college search.

“I visited a lot of colleges, but for some reason, as soon as I stepped foot on this campus, it felt like home,” she said. “The feeling that I had when I came here was unlike any of the other campuses. When I got here, the energy was right.”

“I visited a lot of colleges, but for some reason, as soon as I stepped foot on this campus, it felt like home,” she said. “The feeling that I had when I came here was unlike any of the other campuses. When I got here, the energy was right.”

Camara has made the most of her time at BGSU, earning a coveted spot in The Hatch 2017, BGSU’s version of the popular TV show “Shark Tank” in which student entrepreneurs present their business ideas to alumni investors.

This was her second attempt to enter the competition after having her application rejected her sophomore year. Not one to give up, Camara worked hard to refine her idea and her application with the guidance of her professors – earning her a spot in this year’s final event.

“I knew that it was an opportunity that I wanted to grasp,” Camara said. “I did not want to leave BGSU without being in The Hatch.”

Camara’s venture, 10,000 Threads, earned enthusiastic funding from three investors. They were wowed by her live fashion show and captivated by the story behind her clothing line, which merges rich traditional textiles with styles of western society.

The fabrics used in Camara’s designs are hand-woven and dyed using indigenous techniques of Guinea. All the patterns are made by hand, and local tailors use Camara’s design specifications to produce the finished pieces.

“As I was developing my business plan, I got to really think about what I wanted to be as a designer and my core values and the core values of my clothing line,” she said. “I decided I didn’t want anything to do with manufactured fabrics from factories in China. If I want to promote Africa and promote the beauty of Africa, I want to work with the fabric that my people made back home.”

Not only can Camara take pride in paying homage to her Guinean culture, she is proud to know that she is creating jobs back home, too.

“The work that these artisans and tailors are doing is very hands-on and very tedious,” Camara said. “They often are not paid enough, not even minimum wage. And it’s an art form that’s slowly disappearing because a lot of businesses prefer a cheaper, quicker method. That’s something that really bothers me.”

Because 60 percent of the population in Guinea lacks access to clean water, she also plans to donate a portion of her profits to help this cause as well.

After graduation, she will move to Atlanta to pursue job opportunities in the fashion industry and continue to work on launching her company. She hopes to have her website up and taking orders by the end of the year.

“I feel like fashion is an interest I was born with,” she said, reflecting on her chosen career path. “As a child, I can remember going to the open-air markets to see the beautiful textiles the artisans made. It’s my passion, and there’s no better feeling knowing that I am turning my dreams into reality in a way that marries my past and my future.”