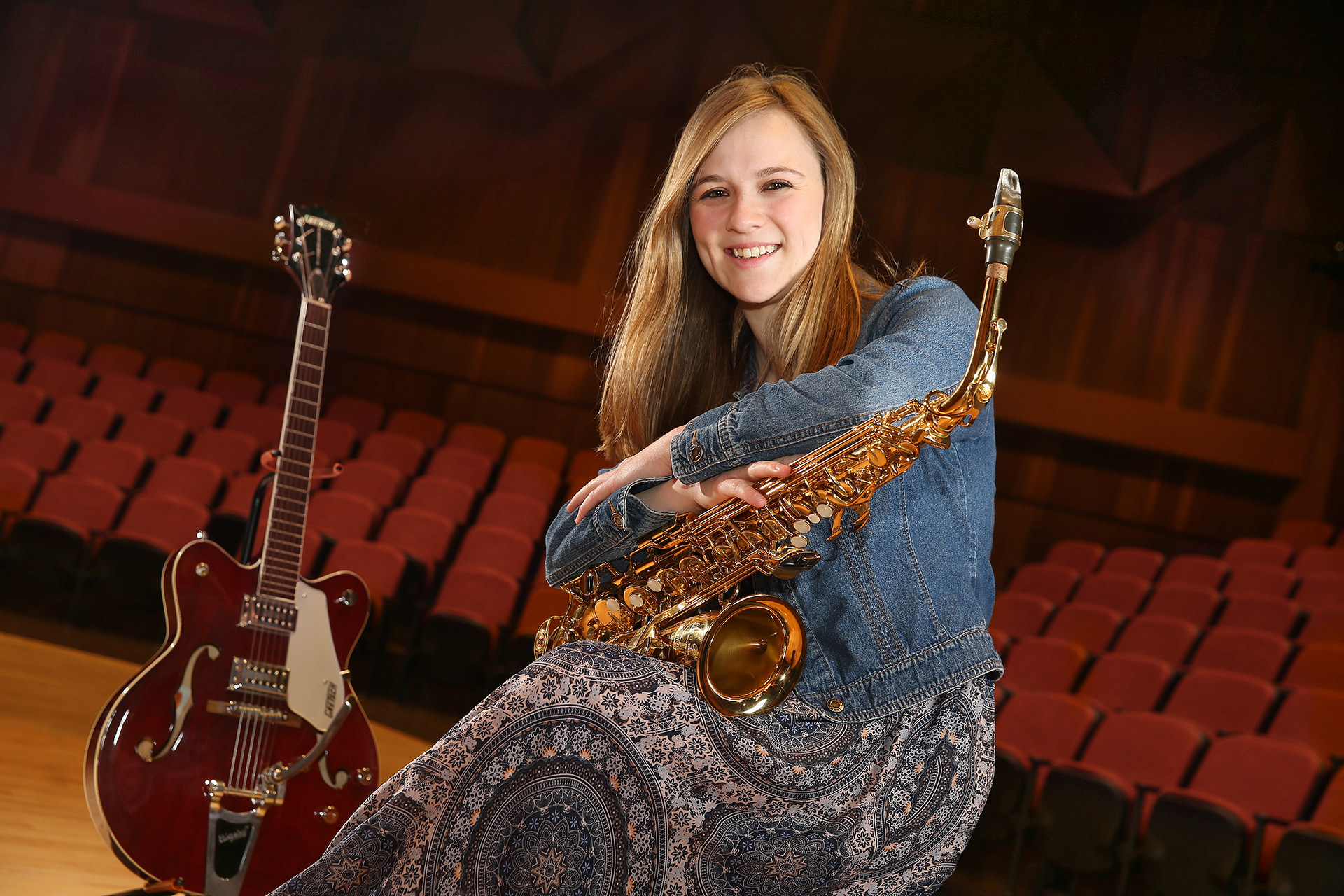 2017 Success Stories: Open to all of music’s possibilities

At BGSU, Erika Nalow didn’t have to choose one path; she took many

Erika Nalow plays two instruments - the guitar and the saxophone – and that not only factored into her having a double major at Bowling Green State University, but also into her attending the University in the first place.

“I think that’s one of the great things about BGSU,” said Nalow, who grew up in Madison, Ohio, east of Cleveland. “It’s allowed me to not have to choose between the two. When I was going through different college processes, a lot of schools said I’d have to pick one or the other or maybe only do jazz music or classical music. BGSU has allowed me to do all of those things, and I don’t know if I would have had that experience anywhere else, and I’m thankful for that.”

As a double major in guitar performance with a jazz emphasis and jazz studies in alto sax, Nalow is graduating from BGSU with a 3.98 GPA and a Bachelor of Arts Degree from the College of Musical Arts and Honors College.

“It’s been a great four years,” Nalow said. “I think BGSU has allowed me a lot of opportunities to have my hand in various projects at multiple times. I’ve had a lot of access to great resources to learn a lot about myself and music. Without those opportunities, I don’t think I’d be going the same direction I’m going now without those experiences.”

Nalow, who has always wanted to be a session musician, recently opened to the possibility of a career on the other side of the studio glass thanks to an internship last summer that was facilitated by Mark Bunce, director of Recording Services at the University.

“I took a class one summer with him in recording and he was able to get me an internship at a recording studio in Nashville,” she said. “I feel really fortunate just knowing all these different faculty, and working with all of them has led to a lot of different steps that have developed me as a person and as a musician.”

During her internship at Sound Stage Studios, Nalow handled all of the microphone setup and teardowns for the live sessions, and that experience led her to completing a rather ambitious Honors project.

“My Honors project was a recording project, and I used the Michael & Sara Kuhlin Center and recorded an original song, and I did all of the microphone setup, the tracking, the mixing, engineering, and I performed on it,” she said. “I played guitar and saxophone and sang on it and wrote it —  that was my Honors project this year.”

As if carrying a double major and being a member of the Honors College, didn’t keep Nalow busy enough she was very active in school organizations and performed in many several ensembles. She also played in two duos, one on campus and the other off campus.

Nalow is finishing up the school year as the current president and founding member of the Music Industry Club, which she started in October 2016. The club is comprised of a group of students who desire to work in the music industry, and the organization tries to give these students opportunities to gain valuable work experience while still at BGSU. The club hosted monthly open mic nights on campus, and student members gained experience in performing, selling merchandise, live sound production, social media marketing and even some film/photo opportunities.

“I’ve been in a ton of different ensembles since I’ve been here,” she said. “I think over the course of four years I’ve been in Jazz Lab Band I and II, a jazz combo, Vocal Jazz Ensemble and Classical Guitar Ensemble. Outside of that, I do a lot of duo stuff with bassist Jeff Bouck and we do a lot of the formal events like an alumni banquet or Athletic Hall of Fame introduction. I’ve played in town in a little duo called Simple Enough - that’s me and drummer Tucker Marshall.

“I played guitar a lot with Jeff and Tucker this year, and sometimes I sing, too. I’m an amateur vocalist, but I like to play out and do those kinds of things.”

Nalow has been accepted into graduate school at Middle Tennessee State, just 20 minutes south of Nashville, where she will earn a Master of Fine Arts in the school’s Recording Arts and Technologies program.

“I’ve always had a lot of interest in being a session musician, and I think I’d still really enjoy that, but I’m excited about graduate school because studying recording and being in this atmosphere for the next three years of the program is going to expose me to some career opportunities that I didn’t even know existed,” Nalow said. “So, I am going into it open-minded. I still would love to be a session musician, but I am excited to see what other opportunities emerge from just being in a different environment and studying a different topic.”

To learn more about Nalow’s career in music, go to her website.