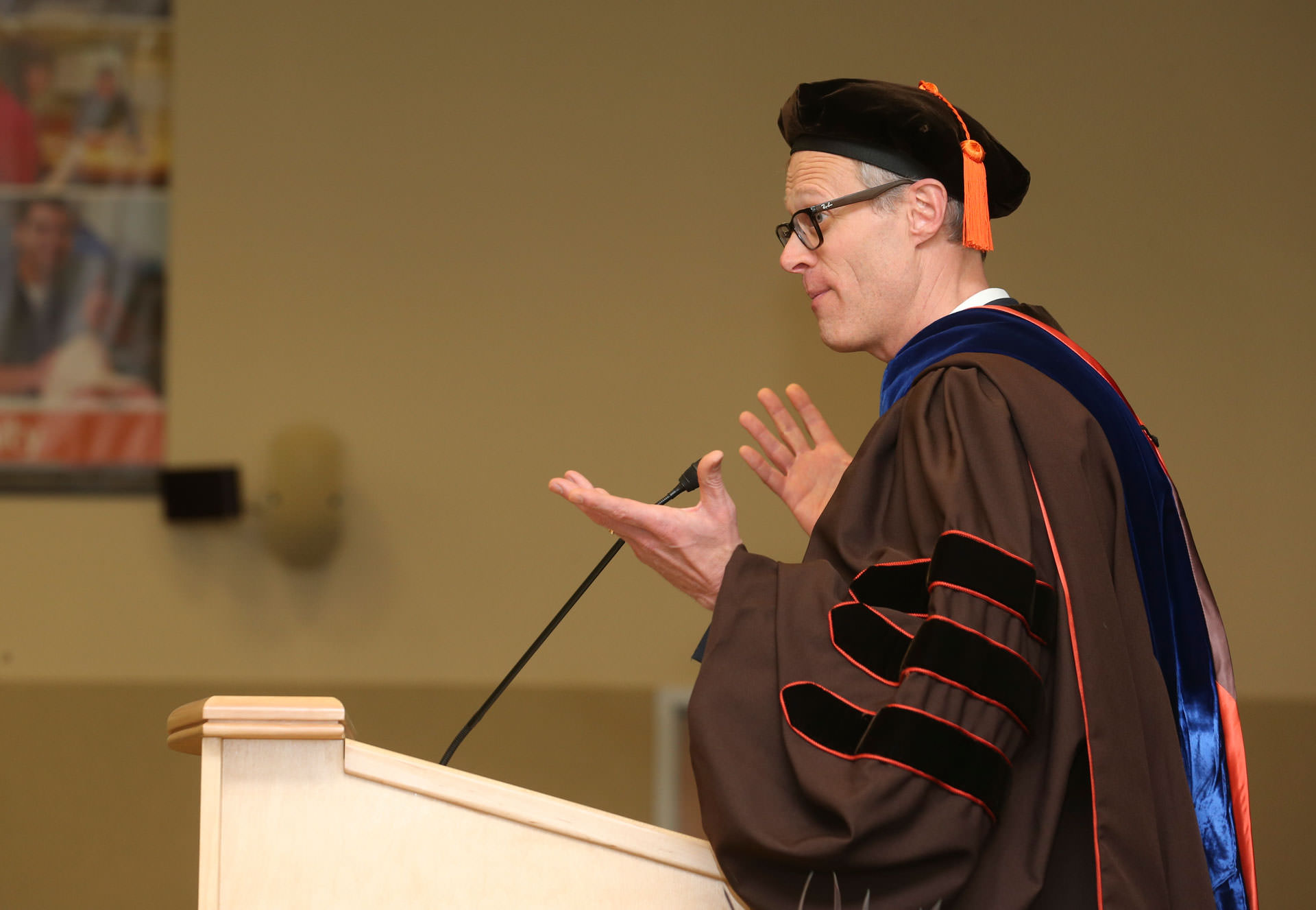 From class clown to executive dean

It might be difficult to picture William MacDonald, executive dean of regional campuses at the Ohio State University, as a college student walking across campus with a squirrel tail sticking out of his briefcase, but they are one in the same.

“When I started at Firelands, I had no idea where a college degree could take me,” he said. “Neither of my parents has attended college, and I had barely any idea what a college degree was all about, apart from possibly helping me get a job.

“My road eventually took me to my present position where, every day, I look at students and see myself.”

It didn’t happen cold turkey – he really did walk through the pit with a squirrel tail hanging out of his briefcase – but it did happen. MacDonald started his tenure at OSU in 1992 as an assistant professor of sociology at the Newark campus and has held a variety of administrative roles on the campus, including honors director, assistant academic dean, academic dean and dean/director. In 2010, while retaining his role as dean/director of OSU Newark, he was named the executive dean of regional campuses.

“With a history of shenanigans like that and with very little fear of performing in front of a crowd, I easily followed the call of my professors into extracurricular activities while I was here,” he said. “They probably didn’t know it, but the efforts my instructors made to get me involved in campus life helped me turn away from lots of distractions.

“Curiously, we almost never talked about my career plans. We talked about ideas, mostly, and about actions – others’ actions and our own actions. There is so much more to a college degree than job preparation. It’s also about citizenship training. My instructors didn’t label their work with me as such, but they knew what they were doing.”

They pulled MacDonald into the Speech Activities Organization, theatrical productions and even a theater conference.

“It was the theater experience that most profoundly changed me,” he said, adding that he worked on four different productions: “The Uninvited,” “Snoopy,” “Medea” and “The Huron Society.”

“My road eventually took me to my present position where, every day, I look at students and see myself,” he said. “Thinking of them, I try to encourage our faculty to mentor them the way that I was mentored here. Mentoring outside the classroom, be it from peers, professors or instructors, does work. The literature overwhelmingly indicates so.

“As your road goes ever onward, you will certainly change, and you will no longer be the human you are at this moment. You will continue to mature and to become more engaged as a citizen. I hope that you will come back here, perhaps by catching a play, taking one of your former professors to lunch, speaking to students, participating in alumni events or donating to a scholarship. Folks here want to hear about your accomplishments because your success is partly their success.”

MacDonald has published articles in a variety of scholarly journals, received funding from the National Science Foundation to support his research and was named a 1997-1998 Young Scholar in American Religion by the Center for the Study of Religion and American Culture at Indiana University-Purdue University Indianapolis. He has also won several awards including the 2010 I Believe in Ohio State Campus Campaign Leadership Award, the 2000 Robert A. Barnes Award for Exemplary Teaching, a 1999 Templeton Foundation Science and Religion Course Prize, and the 1997 Ohio State Newark Scholarly Accomplishment Award.