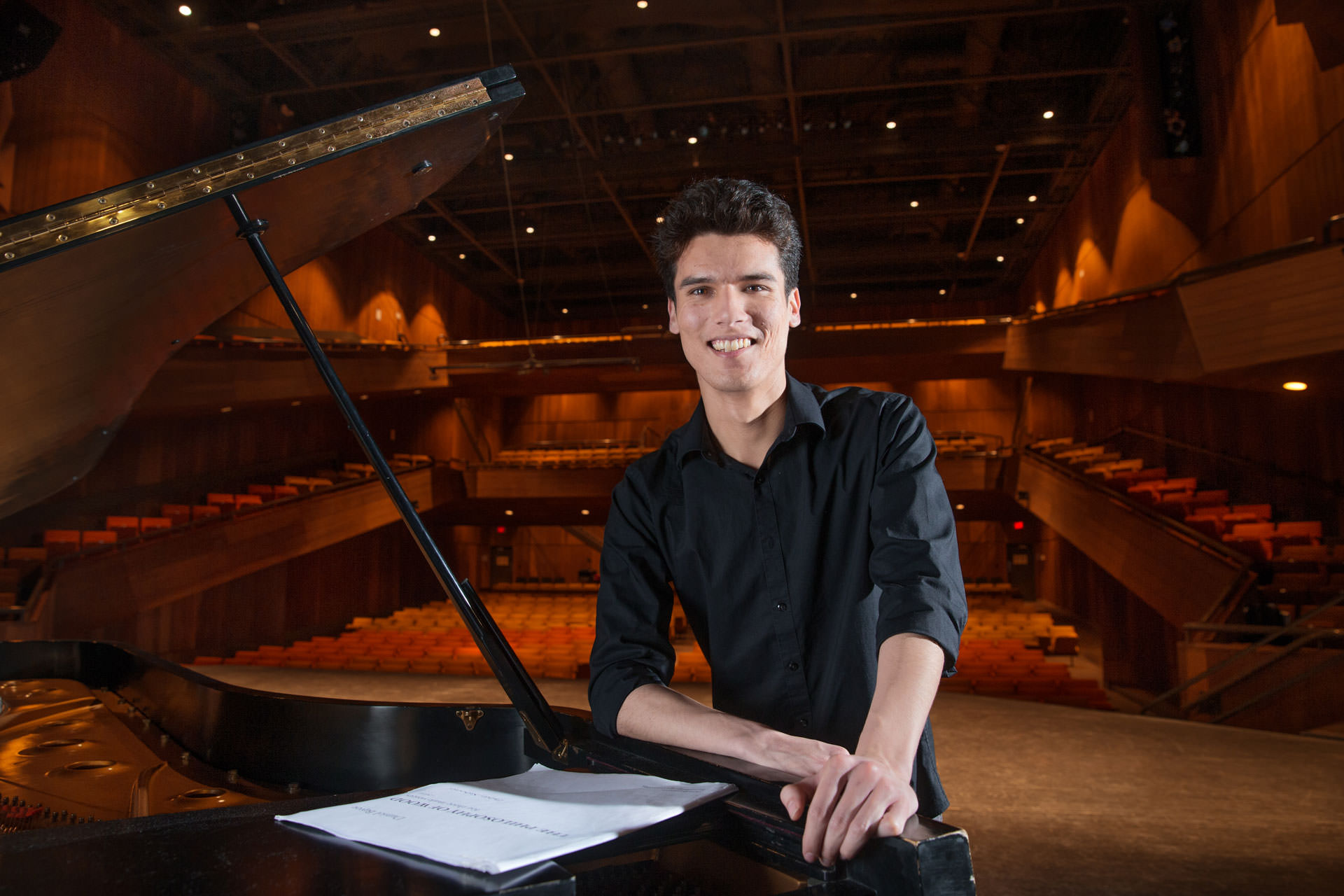 Daniel Bayot of Hawaii finds his musical home at BGSU

Daniel Bayot grew up in an abundantly musical family on the Hawaiian island of Oahu. Bayot’s father is a full-time professional musician and Bruno Mars is his cousin.

It was only natural that Bayot would seek out a career in the music industry as well. His father helped foster Bayot’s music interest early on. He would tag along with him to gigs around the island, singing pop songs to entertain the tourists at hotels. He also took piano lessons as a child and learned to play the cello in middle school and the saxophone in high school.

“I was very unfocused with what instruments I wanted to learn, very scattered,” he said. “Later on in high school, I really fell in love with classical singing and voice and choral music.”

His interest in classical music took him to Michigan, where he attended Interlochen Summer Arts Camp after his sophomore and junior years in high school. During the six-week camps, he learned about Bowling Green State University’s highly regarded College of Musical Arts .

“I had the privilege of attending Interlochen, and a composition professor there highly recommended BGSU, especially as a hub for contemporary classical music,” said Bayot, who graduated May 5 with a 3.713 GPA and a Bachelor of Music in music composition. “BGSU was exactly what I was looking for.”

“The music technology and audio recording technique classes that I’ve been taking at BGSU give me a lot more confidence in finding employment after graduation. People always seem to be looking for graduates with these skill sets, and I’m happy BGSU has equipped me with knowledge to work in those fields.”

Bayot had known of Bowling Green because his mother, who originally is from North Canton, Ohio, had attended BGSU for a couple years before transferring to the University of Hawaii, but he didn’t know how acclaimed the University’s music school was until he attended Interlochen.

Bayot took voice lessons throughout his four years at BGSU and was a member of the Combustible Arts Ensemble, an experimental free improvisation group.

“We explored sound in a number of unconventional ways,” he said. “That exploration is really compelling and fulfilling for me. It’s a very talented group and a very exciting atmosphere to perform in.”

He also was in the Collegiate Chorale, which is the top University choir, for multiple semesters.

“I had the opportunity to tour in Florida and New York with the Collegiate Chorale. It was really nice to be able to show what musicians at BGSU can do beyond Ohio. I wouldn’t have been able to form bonds with the people I have here without those kinds of experiences.”

Bayot also formed his own vocal ensemble, 3 dB Vocal Ensemble. One of his compositions for the ensemble, “The Philosophy of Wood,” recently won the National Federation of Music Clubs’ Marion Richter American Music Composition Award with a cash prize of $1,100. He also won the CMA’s student composition award this spring, and his music will be featured in BGSU’s New Music Festival in fall 2017. The Grammy Award-winning Cleveland Chamber Symphony performed a sinfonietta he composed in March 2017. He also was a finalist for the BMI Student Composer Awards.

“Bowling Green definitely exceeded my expectations, and I am leaving the University with skills I would have never dreamed of having while I was in high school,” Bayot said. “The music technology and audio recording technique classes that I’ve been taking at BGSU give me a lot more confidence in finding employment after graduation. People always seem to be looking for graduates with these skill sets, and I’m happy BGSU has equipped me with knowledge to work in those fields.”

Bayot credits BGSU faculty for encouraging him to take chances while writing his compositions.

“Dr. Christopher Dietz really helped change the way that I conceptualize my music and how I can approach my compositions in a more nuanced way,” Bayot said. “Dr. Mikel Kuehn really helped me get over all the intense anxiety I was having as a composer and embrace the many different styles — from conventional to experimental — I’ve wanted to explore and not be ashamed of writing any particular way.”

As far as picking a favorite between performing and composing, Bayot doesn’t want to have to choose between the two.

“I don’t think I could pick composing or performing or vice versa,” he said. “They’re both fulfilling in very different ways. On one hand, it’s nice to sit back and watch really incredible musicians bring my music to life. On the other hand, it’s really nice to step into a character and step on stage and create this intense experience for an audience.”

Bayot is taking a year off from studying before considering graduate schools, though he has one in mind.

“I’m looking closely at the University of Southern California,” he said. “In September, I was one of 10 people selected for the L.A. Philharmonic National Composers’ Intensive. They flew me out, paid for my hotel, my meals, and I wrote for a chamber orchestra there called Wild Up.

“When I got to USC, people from the Juilliard School; the University of California, San Diego; Columbia — all these prestigious music schools — and I was the only person in an undergrad program; everyone else was in graduate or doctoral programs. It felt really nice to represent BGSU in that context.

“I really loved the L.A. art scene while I was there, and met some USC faculty and I’m hoping that I end up there for grad school.”

Now that he has graduated from BGSU, Bayot is looking forward to having a diverse musical career.

“I’m looking to have a portfolio career that involves a mixture of composing concert music, film music — which I already do for independent filmmakers — arranging and orchestrating, conducting and performing,” he said. “I’ll just see whatever doors open and what doors I can build myself.”