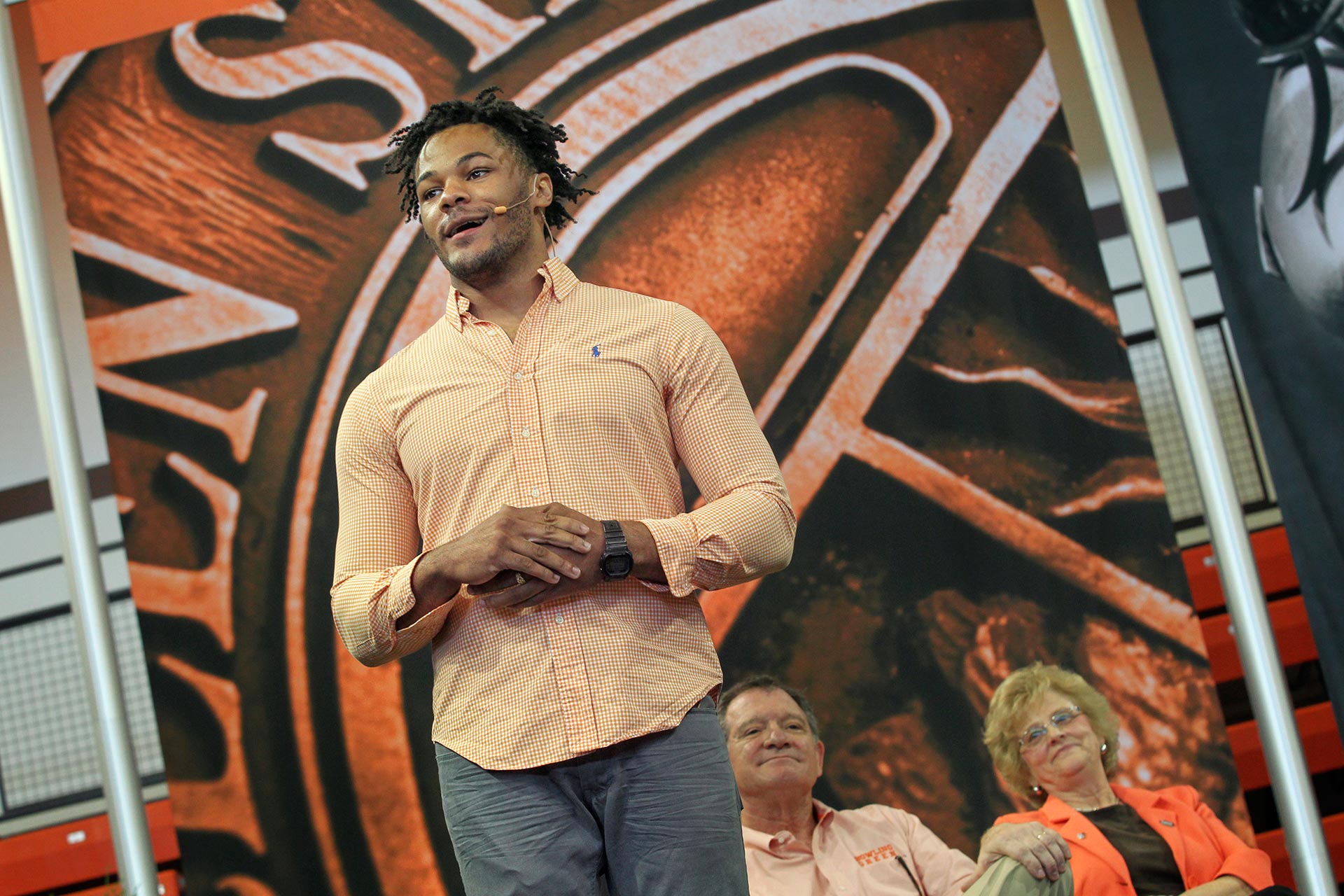 Helping others discover their stories

Journey from Detroit to BG creates path toward mentoring

Darrico Harris likes to help students look for their own paths, their own stories.

The responsibility comes naturally to Harris, who has spent the last four years as a resident advisor, double major in psychology and sociology in the College of Arts and Sciences and an active student leader, all in pursuit of his own path, his own story.

His story is born out of growing up in a single-parent home in Detroit, attending a high school where he consistently saw gang violence and where no one was speaking about college. Surrounded by high school peers who had no intention of continuing their education, Harris hadn’t put a lot of thought into what would happen after high school.

But somewhere in his head, he knew he could do more. He saw his mother work hard and yet they were living at a bare minimum. “I saw the possibilities and knew I wanted more out of life,” Harris said.

His grandmother, a spiritual and positive influence on him, pushed the quiet, shy young man “to a higher standard,” he said. She helped keep him out of trouble, focused on the right things and encouraged him to look at life differently than what surrounded him.

While his high school guidance counselors saw his potential and encouraged him to apply to college, it wasn’t until after he graduated that he got serious about the process. As a first-generation college student in his family, Harris wasn’t familiar with the process, so when a large, bright BGSU-orange postcard that mentioned scholarship opportunities caught his eye, he suddenly felt the need to check it out.

“I knew I had to find a way,” Harris said. “I had never left the state before, and as difficult as it was to leave my home and family, getting away from Detroit was necessary.”

At the end of June, he and his mother arrived on campus for the first time in a car he rented and drove the 90 miles south to officially begin his BGSU journey.

“Before I got to BGSU, I wasn’t sure I was going to make it here, or anywhere,” Harris said, but once here, with a determined mindset, he decided to make the most of the opportunities before him.

“Even though I was scared and wasn’t sure what to expect when I started, I looked for opportunities to better understand the expectations. I found the (Kreischer) residence hall was key in my comfort zone, and I learned about so many resources when I got involved with the hall council,” Harris explained. He quickly threw himself into residence hall governance and discovered a confidence he had never before experienced.

From joining the hall council to being elected vice president and then being selected to be a resident advisor, Harris found purpose in the role and a lot of open doors.

He also gained confidence in his studies. “I remember my grandmother telling me, ‘To get better you have to work hard,’” he recalled. “I’ve kept my grandmother’s voice in my head to stay focused and tunnel-visioned toward my goals.”

His goal—to earn a Ph.D. in clinical psychology and become a university professor— received a boost when he was named a McNair Scholar, which prepares first-generation or underrepresented undergraduate students for doctoral studies through involvement in research and other scholarly activities.

Harris has been involved in and recognized for his undergraduate research, in which he examined “Factors Influencing the Decisions of Black Males to Attend College.”  He interviewed 15 black men who are either in college, have attended college or do not plan to attend. “The results of this study can be used to innovate programs and initiatives to encourage black males to attend, persevere and graduate from college,” Harris explained.

One of his faculty mentors, Dr. Ewart Skinner, media production and studies, said, “I admire Darrico’s initiative in taking on this project that lends itself to more exploration and analysis as well as greater self-consciousness.”

“Because of the knowledge I have gained in my years at BGSU, I am in the position that I can be a mentor to others,” Harris reflected as he prepared for graduation.  For the next year, he will teach in a struggling urban school district in South Carolina through City Year, a nonprofit educational organization. After completing the contract he will attend graduate school and continue his academic career path.

Through all of his experiences from serving as a resident advisor and an undergraduate researcher to modeling leadership in such groups as K.I.N.G.S. (Knowledge is Necessary for Growth and Success) and the Black Intellects Group, he has “learned that BGSU is way bigger than I ever knew.” He is proud that his story is told in the opportunities he has had “to pay back and to pay it forward.”