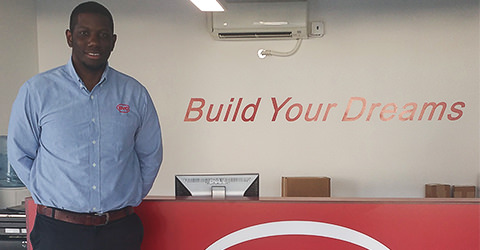 Greg Davis’s undergraduate and graduate college education did not take a typical path as most students. He credits Bowling Green State University for helping to give him the fortitude to complete his education.  “I would describe my educational journey at BGSU as a long one,” states Davis, who graduated with an undergraduate degree in economics in 2008 and a master’s in economics five years later.

The challenge was completing his graduate degree. “I left BG with four credit hours of study remaining to move and live in another country. After five years of not studying or really focusing on my master’s, I sucked it up and finished what I started.  I would say that BG played a part in giving me the courage and mental fortitude to push through and complete what I started.”

The economics graduate, who also studied Chinese as an undergraduate, says that because of his BGSU education, he learned to adapt to change. “BG gave me the courage to drop everything and move to China, where I placed myself into a culture and language which I had no true understanding of.  Because of what I learned from BG, I was able to adapt to my environment, strive and learn to be an effective member of the Chinese culture and business environment.”

Davis is putting his economics education to work as the DBE liaison officer and bids manager at BYD Motors, the world’s largest producer of battery electric vehicles located in California. He describes how he applies what he learned in college to his job. “I am asked to utilize the same principles taught to me at BG, such as analyzing and interpreting data, interacting with different business professionals, and implementing economic analysis of future goals and plans for our company.”

He says “he wears many hats” while at work. “My main responsibilities are dealing with federal compliance for our company.  In this capacity I have to work directly with the FTA (Federal Transit Administration) to ensure that we are meeting their specifications for manufacturing a transit bus. I am also responsible for overseeing responses to Bids and Grants.”

One project that he is very proud of is setting up an electric bus college tour. His company’s plan is to make BGSU its first stop in the spring of 2016. “I am excited to bring a pure electric bus to BG for the simple fact that I know that BG is a forward-looking and environmentally-friendly campus.  I want BG to be the first university in Ohio to have electric buses on its campus even if it is for a mini demonstration.”

He says by earning both degrees at BGSU, he gained a better rapport with the economics professors.  “I believe this method worked best for me, because it allowed me to really dig deep and understand why many of my professors in economics had a passion for their field of teaching.  It gave me all the more respect for economics as a field.”

His love of economics started with Dr. John Hoag, BGSU professor emeritus of economics, now retired. “The first day, I had his class it opened up my eyes to how vast and interesting the field of economics is and ultimately how much more there was to explore.  I believe that his imprint on my educational life has led to a greater impact on my professional life.”