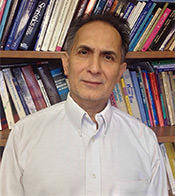 The world has changed dramatically since the first edition of Drs. Srinivas Melkote and Leslie Steeves' book on communication for development was published in 1991. Since then, globalization has revolutionized the basic way in which we conceptually divide the world, according to Melkote, School of Media and Communication, and Steeves, School of Journalism and Communication at the University of Oregon.

"With emerging technologies and digital media, old terms have changed and new terms have been added," Melkote said. The third edition reviews the history of development communication and analyzes diverse approaches, along with presenting the latest scholarship on the topic.

"Globalization has accelerated so rapidly in the last 15 years that, while we added a chapter on it, it really is woven all together and enmeshed in everything we write about," Melkote said. "We are looking at digital media in all its forms because they are emblematic of globalization. We're no longer focused on the third world."

A resulting change of this globalization is that we no longer think of countries as "units of consideration," Melkote said. Instead of assuming that one culture is representative of all the people in a country, what scholars call "methodological nationalism," now the units have become much smaller.

"We've deliberately chosen smaller units of analysis, to look more at communities. Communities can be bounded by physical space but today they are also connected by common affiliations."

In fact, he added, a new term has been coined: "glocal," meaning the blending of the global and the local. Technology is allowing constituents anywhere in the world to come together temporarily on shared concerns, such as gay marriage, the rights of workers and many other issues people care deeply about, Melkote said. "Identity issues are very important."

The new edition of "Communication for Development" explores the uses of media and communication to facilitate social change and social justice.

It's important to differentiate social change from progress, and to understand the role that power plays in effecting change, Melkote noted. "Social change is continuous and chaotic," he said. "Many actors in history have used their power to fashion change that is desirable to them, but is not necessarily progress."

Today, with the inequality between the classes widening, and blue collar wages stagnant since the 1990s while the gap between their earnings and CEOs' grows ever larger, the role of development communication must expand to embrace empowerment, the authors say.

"Power is a big thing. How do the powerless get it?" Melkote said. "Today we have development communication used for emancipatory politics that address inequality, and to promote self-actualization, or the freedom to aspire.

"There are new ways in which development communication can play a role in advocacy, resistance and empowerment."