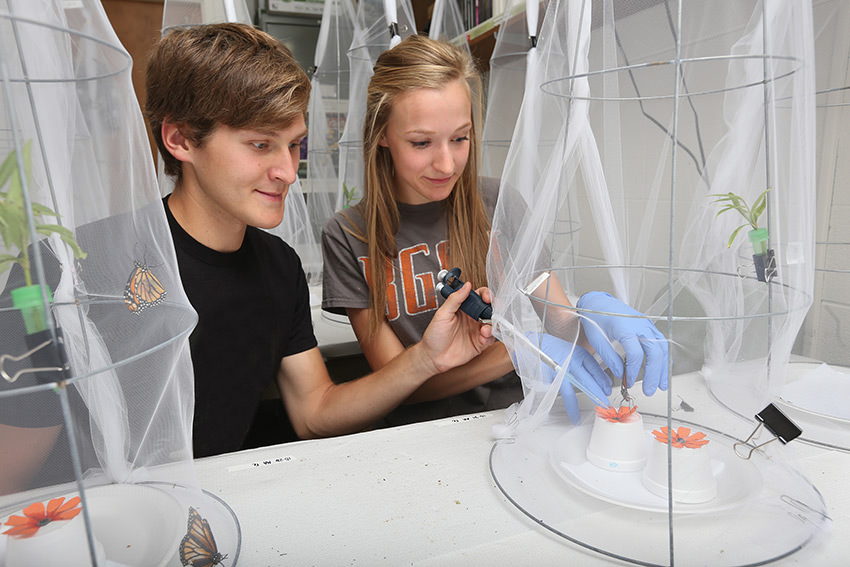 In a small, warm room in the Life Sciences Building, rows of white mesh tepees housing monarch butterflies are lined up on tables. The fabled, orange and black insects are carefully tended and monitored by BGSU conservation biology students Paige Arnold, a second-year graduate student from Temperance, Mich., and Matthew Zach, a junior from Fairview Park, Ohio.

Every day, Arnold and Zach delicately unfurl the monarchs’ tiny proboscises — strawlike mouth parts for sipping nectar — and place them onto simulated flowers with containers of nectar so they may drink in the sweet solution. The students make note of the butterflies’ mating and the number of eggs they are laying on the milkweed leaves in their mesh homes. When those eggs begin to hatch, Zach will count and assess the caterpillars for how robust they are, and which develop most quickly.

All this activity, which has to happen within the butterflies’ relatively short reproduction season, is the subject of Arnold’s research for her graduate thesis. Zach, who plans to become an entomologist, is also collecting data for his undergraduate research project. Both are students of Dr. Helen Michaels, biology.

The work Arnold and Zach are doing may one day provide insight into what plants are most beneficial to monarchs and help guide conservation and restoration efforts. Arnold has already been asked to write an article for Wild Ones, a national not-for-profit organization that promotes biodiversity by encouraging the growing of native plants in backyards as habitat for insects and other wildlife.

Although monarchs are found in most of North America, the Caribbean and even in Australia, climate change and habitat loss are threatening their existence.

Arnold is studying whether some plant nectars, the adult monarchs’ primary food source, are more beneficial than others. She is feeding some of her subjects a specific composition and concentration of sugar solution while others get nectar rich both in sugars and amino acids.

Her work is supported by two grants, from Prairie Biotech Research and the Ohio Biological Survey. “The grants helped so much with buying all the supplies, including the cages, and they helped with travel for my field survey, too,” she said.

The caterpillars came from the monarch citizen scientist conservation group Monarch Watch, which raises them.

“Nectar types are interesting because they can vary so much. I got into studying nectar with the butterflies because it’s so controversial whether amino acids actually influence the fitness of the butterflies,” Arnold said.

“I did a survey over the summer looking at the different types of flowering, nectar-producing species, found in tall grass prairies and oak savannahs across the Oak Openings area and in Wood County to get an idea of how sugar and amino acid concentrations vary among species.”

She was assisted by undergraduate Mercedes Chumbley, whose work was funded by a grant from BGSU’s Center for Undergraduate Research and Scholarship.

“We looked at nectar of many different species, including four milkweeds: Sullivant’s milkweed (also known as prairie milkweed), swamp milkweed, common, and butterfly milkweed. For the experiment we used swamp milkweed leaves from BGSU’s Poe Road Prairie for the butterflies to lay eggs on and to feed the caterpillars,” Arnold said.

“We hope to be able to link the results of our survey to the monarch butterflies through the amount of amino acids in the various species we surveyed and to the reproduction and longevity of the butterflies in the experiment. And we hope the results will be used to make restoration recommendations about what plants to include or increase in abundance in habitat restoration plans.”

Another flowering plant relatively rare in Ohio, Coreopsis lanceolata, or sand coreopsis, had been observed by Michaels in her own research on the endangered Karner blue butterfly to have nectar with unusually high levels of amino acids, and the Karners of Michigan were often found feeding on this plant.

After having Coreopsis nectar analyzed for its amino acid composition by a lab at Ohio State University, Arnold created two synthesized nectar types modeled after this wild nectar and was ready to begin feeding the creatures when they emerged from their cocoons, known as chrysalises in butterflies. 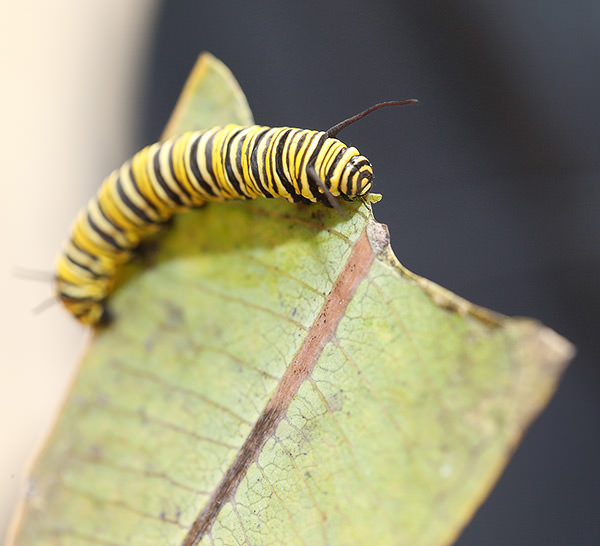 Luckily for Arnold, Zach joined the project in early May and worked diligently through the summer with preliminary rounds of the experiment. For the final experiment, it’s been an enormous amount of work to feed them and keep their cages clean — hours a day to tend to the 60 monarchs, which eat voraciously.

“That’s a lot of mouths to feed,” Michaels said. “One nearly mature caterpillar can strip a plant of most of its leaves in several days.”

“He’s the best possible combination of enthusiasm and interest and wanting to learn,” Michaels said. Zach’s help was essential for raising the caterpillars and maintaining the hygiene of their homes (crucial for preventing dangerous parasitism). Arnold had to feed the butterflies daily and also weigh each one every few weeks, which involves first putting them in an envelope.

Working so closely with them, Zach said, he could discern differences among the caterpillars in personality. “Some are more fussy, some are just ready to go while others seem to almost have a temper tantrum when we move them. Some are more energetic.”

The group is seeing some preliminary results of their study.

“We seem to have a lot of the amino acid ones laying eggs, and for a while it seemed they were more interested in mating,” Michaels said. “It’s too soon to tell, so we just have to keep collecting the data.”

Zach is collecting data using the caterpillars that hatched from Arnold’s experiment. He is comparing the growth of the caterpillars eating the swamp milkweed versus those fed prairie milkweed, and their survival.

“I need to get enough eggs from many sets of moms in the first experiment to be able to make a good generalization in my study,” he said. “I’m especially interested in the prairie milkweed group. There’s been so little done on this species of milkweed.”

Fitness is an important factor for insects that have to travel so far. The breeding generation, the one Arnold and Zach are working on, will only live two to five weeks, but their offspring, the migratory generation, will fly to Mexico, where they will overwinter and start back up north.  They will stop in Texas or Alabama, where they can find milkweed and lay eggs and then that generation will fly all the way back home. Not only appropriate food, but also a high number of eggs is important to ensure the process continues.

“This type of migration is considered by some to be an endangered phenomenon,” Arnold said.

Monarch Watch tags its butterflies, and Arnold has followed suit so that, in case any of her hatchlings should be found, their ID number can be reported and recorded. Since the monarchs migrate based on seasonal cues, Arnold and Zach were eagerly hoping theirs would develop soon enough to be ready to fly away. Any that are not will be given to school groups and others who would like to observe the life cycle of a monarch.

“These are very complicated experiments that are challenging and difficult,” Michaels said. “These two are really doing great work.”