Alumnus learns value of connection as a special agent 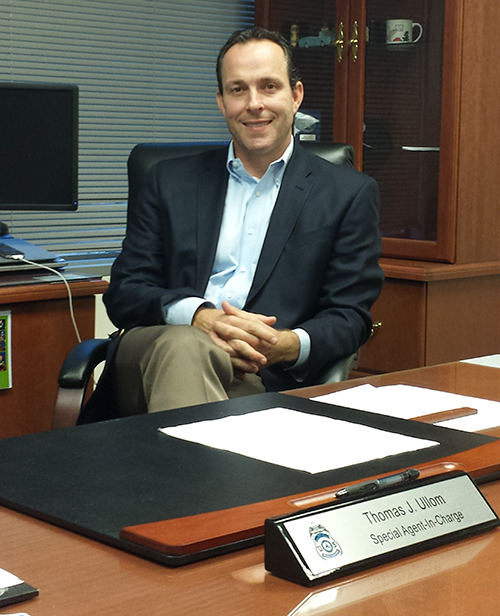 On the inside, you might expect the work with a federal law enforcement agency to be all about investigations and arrests, surveillance and apprehensions, and interrogations and court testimony—and it is—but there is one additional overriding element.

Like many other jobs, it is about people. In his more than two decades in law enforcement on the federal level, Thomas Ullom has learned the intrinsic value of meshing well with a variety of personalities and personas.

“So much of this job is based on the relationships that you develop, and I don’t think that is so different from a lot of other careers,” said Ullom, a 1993 graduate of BGSU who holds a degree in criminal justice. “No matter what field you choose, you can work in great places, but if you don’t connect with the people, the job won’t be nearly as satisfying.”

The Cleveland native is currently the special agent-in-charge, U.S. Department of Transportation, Office of Inspector General, Chicago Regional Investigations. It is the most recent stop on a career track that began with his transfer to BGSU as a college sophomore.

“When I got to BG I made a very quick connection with the staff in the criminal justice program. That provided me with a lot of comfort and confidence that moved me in the direction I wanted to go with my studies and my career,” he said. “There were really quality people in that program and it was an easy environment to succeed in.”

Following graduation, Ullom went on to excel in the specialized training programs for federal agents, and he was voted Outstanding Graduate and Class President/Representative in both the U.S. Marshal’s and the DEA’s Basic Training academies. Since then, he has spent more than 20 years building and maintaining strong professional relationships with several U.S. Attorneys’ offices as well as multiple federal, state and local law enforcement agencies.

“Federal law enforcement is not at all like it appears on T.V.,” Ullom said. “It is one of the most honorable jobs there is, and no two days are the same, but a lot of it, again, comes down to how you deal with people. The work is always going to be the work—that is going to be the case in any career, but if there are good people around you and you have a good working relationship with them, then the job gets done properly and professionally, and you will find it to be personally fulfilling.”

In 2011, he was promoted to the position of assistant special agent-in-charge for the U.S. Department of Transportation, Office of Inspector General, Chicago Regional Investigations. In June of this year he was promoted to his current post leading that office of special agents in conducting fraud, safety and hazardous materials investigations across 11 states, and relating to various U.S. Department of Transportation funded transportation systems.

“Across that wide area, we are responsible for law enforcement, white collar crime, safety investigations, and hazardous material investigations for all the modes of transportation the public uses,” Ullom said. “That’s a lot of states and we perform both criminal and civil law enforcement functions. It can be feast or famine, but you have to be ready to address many different issues.”

Ullom said he has picked up skills, contacts and methodologies at each step in his career, and he believes that compilation of experience serves him well in his current post.

“I think we are all a collection of our experiences—the good experiences and the bad experiences—and you try and take something out of all of those,” he said.

“With the breadth of experience I had from working at different agencies and working for a lot of different managers, I think that allows you to better formulate and model your own management style. Everything you have been through goes on your professional tool belt, and the more of those experiences you have, the more capable you are of responding to whatever happens next.”

He encourages current BGSU students to be patient when they enter their chosen careers. “Expect things to take some twists and turns, and don’t push a management track too early, because you might miss some of the necessary periods of growth that will make you a stronger candidate a little further down the line,” he said.

Ullom knows those twists and turns. Following his BGSU graduation, he was headed to Phoenix to join the police department there, but he stopped in Chicago on the way and interviewed for a federal law enforcement post. He got hired on the spot and never made it to Arizona.

“My academic qualifications were there, but I think it was the ability to connect with interview panel that made the difference,” he said. “In the criminal justice program at Bowling Green, we were forced to learn to talk to people and be involved with people and make presentations, and you couldn’t hide from those requirements. So with that background and preparation, I went into that interview in Chicago confident in my ability. Bowling Green had prepared me to be successful.”