The evolution of technology 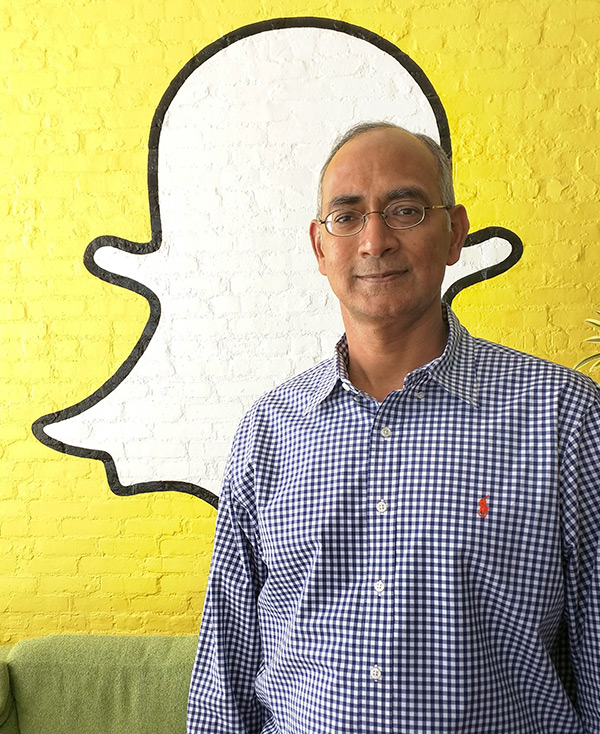 The journey that brought Seshadri Tangutur ’87 to BGSU was more than transoceanic and lengthy, it was transformational.

He arrived on campus in 1985 after a marathon international flight from his native India to John F. Kennedy Airport in New York City, and then an additional leg to Detroit, and finally an airport shuttle ride an hour-and-a-half south to Bowling Green, reaching town in the wee hours of the morning.

He would find Bowling Green to be a place that was quiet and soothing, and quite a contrast from his birthplace of Hyderabad, a busy cosmopolitan city of more than 3 million people.

“There was so much change, so much that was different,” said Tangutur, who received a master’s degree in computer science from the University in 1987. “It was a big transition, coming here with nothing, and trying to adjust to life here, make new friends, and know that you’ve left all of your comfort zones and support systems behind.”

But Tangutur, who currently is part of the engineering leadership team at Snapchat, said he found a secure environment at BGSU. It was a place with a nice balance of strong academics, college athletics, excellent recreational facilities, and a safe and welcoming setting, which allowed him to quickly adjust to life in America. He also found it was a place where he could grow and thrive.

“I started out studying electronics, but after I got here I was exposed to some programming classes and what I saw was an opportunity for me to really leverage technology and be really creative with software and programming,” he said. “It was risky, but it was also an opportunity to create, and that was very attractive to me. I decided to go all-in and made the jump from hardware to software, and then worked very hard to catch up.”

The gamble has certainly worked out well for Tangutur, who was the keynote speaker at the spring 2015 commencement ceremony at the Stroh Center. Before joining the engineering leadership team at Snapchat, Tangutur worked at Google's Motorola Mobility, where he was the corporate vice-president of software engineering. He was instrumental in the development of Motorola’s industry-leading Android platform software.

He has also worked for fiber-optic telecommunications startup Luminous Networks as the vice president of engineering, after starting his career at Pyramid Technology, which was later acquired by Siemens, and where he helped develop software for complex business applications.

“My career started in high-end computing systems and then moved to fiber optics and telecommunications. Both of those roles were more infra-structure oriented – building big boxes in back rooms – and these machines had millions of users,” he said.

The move to Motorola allowed him to focus his work on a personal device held in the palm of the hand—the cell phone.

“Prior to that, I had never built anything you could ship in the millions of units, so the move to consumer electronics was a nice next step,” he said. “I was lucky to have my career overlap with some of the very fundamental developments in the field.”

Tangutur said he was attracted to Snapchat, an immensely popular photo and video messaging application, by the opportunity to build upon a number of those foundational elements he had worked on earlier in his career.

“My career has centered around computing and communication technologies and how they apply to people, and how we can use these technologies to better our lot,” he said. “So it was a very natural progression, to leverage everything I had learned along the way.”

He said he was very impressed with the leadership and bold vision at Snapchat, a company that was started by Stanford undergraduates Evan Spiegel and Bobby Murphy in a dormitory room.

“The students at Bowling Green today should consider that example and never think there are any limits to what they can do,” he said. “The only limits out there are the ones we set for ourselves, so I try to follow that playbook.”

“There is more than enough education and opportunity to take that Bowling Green degree and go make a huge mark in the world”Tangutur said he also urges BGSU students to learn about change, embrace it and to recognize and accept that change is constant.

“Looking back, I feel incredibly lucky to have had a ringside seat in Silicon Valley, where I got to see the most change in technology in the last 100 years.”

He hopes current University students will look at his career path and understand that with the education BGSU provides, the possibilities are limitless.

“There is more than enough education and opportunity to take that Bowling Green degree and go make a huge mark in the world,” he said. “It is really up to the student to see that they can do with it.”

He is proud of the positions he has been able to fill while working in the eye of the technology hurricane—leading large, global development teams, managing several hundred million dollar budgets and helping deliver award-winning products, but finds humor in the peculiar ride it has been.