From LA to BG

One student’s journey for a fresh start

Maurice Gregory knew he wanted to return to his Los Angeles roots once he completed his degree from BGSU. He found an internship at STARS (Strength Training and Rehabilitation Services) in Anaheim, Calif,. and worked diligently to impress his colleagues. Now, three months after completing his internship, he is a full-time employee at the strength training and rehabilitation center and working with professional athletes.

Gregory grew up in South Central L.A., in the midst of street violence and gang activity. His parents, Toledo natives, sent him to Toledo to live with his extended family after a stint playing basketball at Pasadena City College. After arriving in Ohio, Gregory enrolled in BGSU to continue his education.

“I grew up playing basketball and knew I wanted to be a trainer,” said Gregory. “I searched for schools with kinesiology degrees and BG showed up. I started looking at the exercise program and decided that is where I wanted to go. I felt it would be a good fit for me.”

Gregory’s passion for training started when he was young. He spent his time as a youth playing basketball in L.A. with his cousins and a few notable NBA players such as Russell Westbrook. 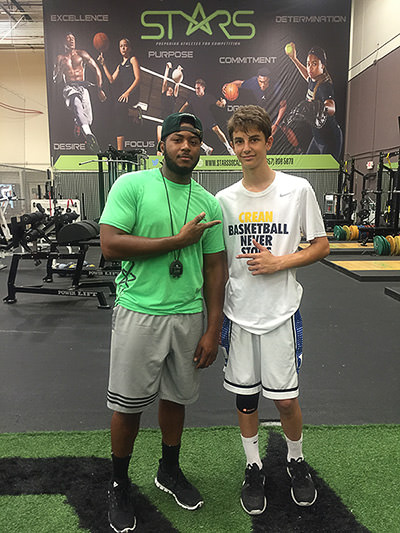 “Westbrook always lost,” he laughed. “We would stay out at the courts all day and go in when it started to get dark. Basketball was an escape for us and it became my passion.”

As a student at BGSU, Gregory immersed himself in the exercise science curriculum. He was a favorite among his professors and provided a different prospective from his peers. In fact, he attributes his position at STARS to the education he received at BGSU. Gregory says the knowledge he gained gave him an advantage over his peers during his internship. The owner of the facility is considering hiring other BGSU students as interns in the future.

“Maurice was very passionate about fitness,” said Dr. Todd Keylock, associate professor of exercise science. “He took what he learned in classes and was always looking for ways to apply it to his dream of helping athletes train better and smarter.”

During his senior year, Gregory started looking for internships in the Los Angeles area. With the help of Dr. Matt Laurent, associate professor of exercise science and program coordinator, he was able to secure an internship at STARS.

“He has a passion for the field, which I think is important to be successful in any profession, but also has combined it with his ability to work and communicate well with people,” Laurent said. “One of the things that I remember the most about Maurice is how clear he was that he wanted to be positive influence on people, and I think he has found a good way to do that through strength and conditioning.”

During his internship, Gregory was able to bring all the methods and technique learned in class to life. He worked tirelessly and was able to earn the trust of his colleagues. During his tenure, he worked with athletes of all status, skill level and age. In addition, he worked with professional athletes from the NBA and NFL.

Confident in his abilities as a strength and conditioning coach, he embraced his role training professional athletes. He helped them meet their goals in the off-season and then helped them get ready for pre-season competition.

“As an intern I assisted the owner, Jason David, with training NFL players,” he said. “It was a good learning experience to assist him in running the drills. I was even able to interact with many of the players and pick their brains about football.” David played in the NFL as a defensive back and now trains many players in the same position.

Now, as a member of the full-time staff, Gregory finds himself doing many of the same tasks he did as an intern, only now with more responsibility. He modifies his client’s training programs to meet individual needs, and, on many days, he finds himself being more of a motivator than a strength trainer.

Gregory admits it can be more challenging to train amateur athletes as opposed to professional athletes. He says training can be difficult when an athlete comes in who has had a bad day at school or when an athlete is not as dedicated to his sport. In certain instances, Gregory has to modify the training regimen in order to decrease the risk for injury when athletes come in unfocused.

He finds his line of work fulfilling and hopes, someday, to give back to the community he left many years ago. His dad works as a probation officer for inner-city youth and, through his work, coordinated various basketball clinics in the old neighborhood while Gregory was growing up. He tagged along many times and is now working to start a training program for youth and adults who live in the inner-city.

“I am grateful for what I have,” he said. “Kids that grow up in my neighborhood and get out don’t want to go back. My past motivates me to be better every day, and I’m blessed for what I have. My goal is to give back and to provide opportunities to kids who might not have any other options.”

Learn more about the exercise science program at BGSU.