Drinking with the Dead 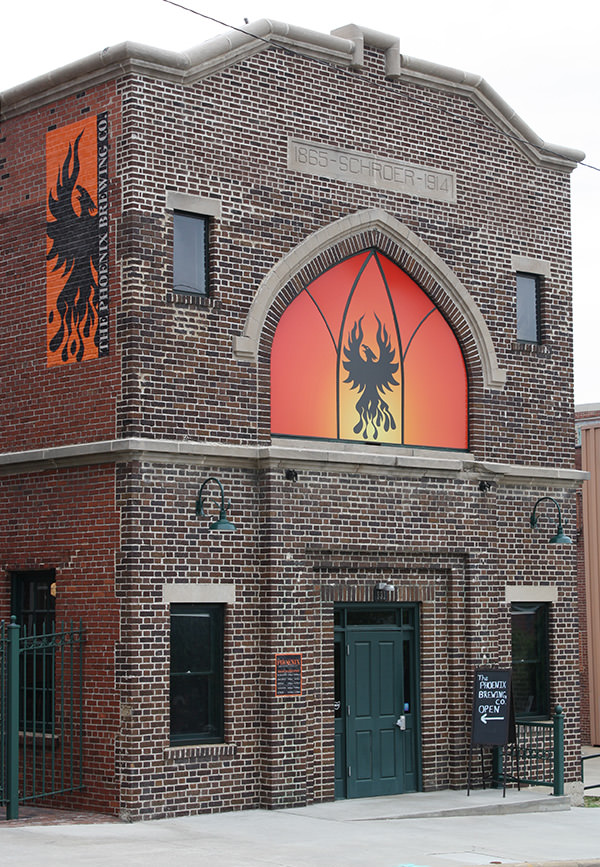 Inside a former mortuary with a dubious past is a brewery that serves libations with names like Embalming Fluid Imperial IPA, which comes with the apt description—“available when you least expect it.”

BGSU alumnus Duncan Macfarlane '93 is the head brewer at Phoenix Brewing Company, which occupies the unique space in Mansfield, Ohio. Before brewing beer, Macfarlane worked in the environmental science field as an analytical chemist. Since he mainly tested water, and water composes about 95 percent of beer, he had a perfect background to start brewing on his own in 1999.

“I got interested in it based on my background because brewing is a science,” said Macfarlane, who also had an interest early in beers that weren’t quite the norm on a college campus in the early 1990s.

“Of course, I liked different beers, even at Bowling Green,” he said.. “There wasn’t much to choose from, but I was always trying something at the edge of the shelf.”

Since 2014, Macfarlane, who is a native of Mansfield, has been overseeing the fermenting at Phoenix Brewing.

The name plays off the second life of the building, which had been abandoned for 80 years. Macfarlane and his business partners opened the brewery 100 years after the building was constructed as the Charles Schroer Mortuary.

“When we saw this building that got us moving forward on a business plan,” Macfarlane said. “We saw what it could be and the mortuary aspect of it was cool.”

The former viewing area on the second floor is currently closed off. What was the embalming area in the basement is now home to the brewery. The taproom is located in what once was the chapel, which is also where then owner Charles Schroer, Jr., committed suicide in 1932. The mortuary soon went out of business and the building remained vacant until the recent renovations.

The proprietors of Phoenix Brewing, likely not wanting to be seen purely as a novelty, decided less is more with mortuary references.

“That’s the conversation we had,” Macfarlane said. “We are in a mortuary. Did we want to really take advantage of that, or be more subtle? We didn’t want to take it too far with scary stuff or make it too in your face. But we do have coffin beer flights that aren’t a subtle reference to being in a former mortuary.”

Macfarlane also realizes that no matter how good their brewery story is, at the end of the day it’s all about the beer.

Phoenix has beers with names such as Danger City Brown Ale, honoring one of Mansfield’s many nicknames, and Ferryman Oatmeal Milk Stout, which surely will help guide patrons to the bottom of their pint glasses. Coming in 2016 is the Toe Tag Belgian Triple. Of course, there also is the brewery’s slogan: “Resurrecting tradition, one batch at a time.”

“The beer’s got to be of high quality and be able to bring back people a second time,” Macfarlane said.

Repeat customers weren’t exactly part of the business plan when the building was a mortuary, but they are a dead necessity in the brewing industry. One way to ensure repeat visits is seasonal brews. One of Phoenix’s popular fall seasonals is Orange Eyes Pumpkin Spiced Ale, and it’s something that Macfarlane and beer fans look forward to.

“I do like doing something new. I like putting our seasonals out,” said Macfarlane, whose next seasonal will be the Surly Gnome Winter Warmer in early November. “We’re getting to a point where people are familiar with what’s coming next because we had them last year. We’ve been open a year and a half, so we’re repeating our set of seasonals and that’s exciting for people. They’re looking forward to a beer that’s going to be out in six months.”

So, would any of those repeat customers happen to be ghosts or apparitions from the building’s century-old existence?

“We do have one ghost,” said Macfarlane, laughing and pointing at the the skeleton perched on the staircase guarding the second-floor entrance. “That is our representation of Charles, the owner who committed suicide. Unfortunately at the mortuary, usually everyone else arrived already deceased.”