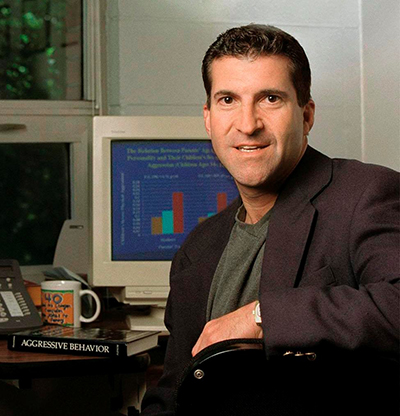 Dr. Eric Dubow’s already packed scholarly life is about to become even more intense. Dubow, a professor of psychology at BGSU, has been named incoming editor of the journal Developmental Psychology. He will assume the role in January 2016.

Published by the American Psychological Association, Developmental Psychology is a top-tier, highly selective journal that deals with aspects of human functioning and change across the lifespan. Empirical research is the primary focus; the journal does feature some theoretical research as well.

“We look for a good distribution of topics, but the majority of articles are concerned with childhood and adolescence,” Dubow said. “In fact, Developmental Psychology is one of the top journals in child psychology in the world.”

As incoming editor, he will be responsible for all new journal submissions starting in January, and will work with current editor Dr. Jacquelynne Eccles for about six months while she wraps up manuscripts already in process. Then Dubow will take over full editorial duties. In preparation, he will spend the next few months familiarizing himself with and compiling databases to aid in his selection of associate editors.

He has been an associate editor of the journal since 2010, dealing mainly with articles on research related to aggressive behavior and resilience in the development of children and adolescents. As an associate editor, he manages from 30-40 manuscripts a year. As editor, he will deal with about 700 submissions annually, reviewing each one before deciding whether it’s of interest to the journal.

“It’s a daunting task, but I’m looking forward to it,” Dubow said. “We get to see emerging areas in developmental psychology and can help shape the field. We cover new topic areas and new methodology. It’s a high-impact publication.”

As with most scholarly journals, submissions undergo a rigorous peer-review process in which, after the editor has decided to pursue a piece, he or she assigns it to an associate editor with expertise in the specific topic, who then must secure from three to five reviewers. The process is double blind, Dubow said: the reviewers do not know the identity of the author and the author does not know who is reviewing his or her work.

Once the reviews are in, the associate editors must produce an action letter to the article’s author saying the work is accepted, rejected, or asking the author to revise and resubmit the piece. The editor reviews each action letter before it is sent.

“Articles can easily go through two or three rounds of revisions,” said Dubow, who has also served as a grant reviewer for the National Institutes of Health.

This is an exciting time to be involved in developmental psychology, he said. The world is undergoing major shifts, and the field for research is rich. Advanced computer technology is making it possible to analyze data in new ways, using new statistical and methodological modeling techniques in longitudinal studies.

“We can study transactions — how we’re affected by and how we affect our environments over time,” Dubow said. “We also are able now to study social and affective neuroscience, looking at how our experiences, especially during critical periods in childhood, actually shape our neurosystems.

“Also today, there are many toxic global environments, with war and violence, and big demographic shifts going on, and with increased immigration,” he added. “Children are growing up in a more global context. How does that shape your identity? How do children and adolescents deal with bicultural identities? What are the protective factors that may help them come through that?

“We look at things like social behaviors, personality development, and moral development. We also know that children and adolescents have moral agency — how in turn do they affect their environment? This is especially true in terms of the role of technology today.”

Along with teaching and editing, Dubow maintains a vigorous research agenda. A specialist in clinical child psychology, he is an affiliate of the Institute for Social Research at the University of Michigan. Among his many projects, he is part of an international, multidisciplinary team studying the long-term effects of violence on children. He and colleagues in the U.S., Israel and Palestine are conducting one of the few longitudinal studies of the effects of persistent political and ethnic violence on Israeli and Arab children. First funded in 2006 by the National Institutes of Health, the study was renewed in 2013, and the team has now collected its fourth wave of data.