The first is to provide early warning of toxic cyanobacteria outbreaks to area water plant managers so they can respond quickly and appropriately to the intensity and extent of the toxic bloom. Algae blooms in the bay are capable of being carried eastward along the shore of Lake Erie near the water intake.

The longer-term goal is to better understand these blooms by monitoring water conditions and measuring and mapping toxin levels. These data will be used to develop models that can predict the conditions under which blooms become toxic and pose a health concern. 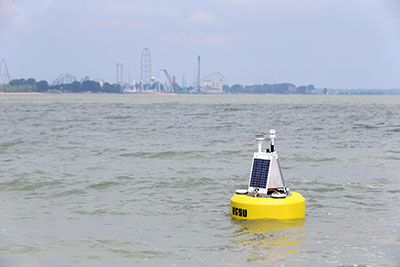 A special buoy with sensors attached was deployed in the bay July 1 to gather data, which will be uploaded by satellite link and sent directly to the team’s cell phones for real-time information.

The project is being run out of Sandusky’s Big Island Water Works. The facility is serving as a research and teaching facility for both the Bowling Green and BGSU Firelands campuses.

“I got involved so our students can participate in this research,” said Dr. Ram Veerapaneni, an assistant professor of biology at BGSU Firelands. “Being a branch campus, we don’t have the same research opportunities as the main campus. Now because we will be working here with Dr. Bullerjahn, and possibly other faculty members, hopefully the students will enjoy it and maybe transfer to the main campus to work with him on a bachelor’s and get graduate degrees as well.”

“This is a big project and we need the help. It works for both of us. It provides research opportunities for Firelands students and I get support on the weekly samples we’ll be doing,” said Bullerjahn. “We will have to map the blooms with satellites and test for nutrients and toxins. This will happen weekly until the middle of November.”

Sandusky Bay algae contains the same toxin as Lake Erie, although a different organism, Planktothrix, produces it, Bullerjahn said. Microcystis blooms occur in the open waters of the lake, whereas Planktothrix thrive in near-shore environments around Sandusky.

Unlike Microcystis, whose blooms are intense but short-lived, generally beginning in July and lasting only a matter of days, Planktothrix is present at a lower level in Sandusky Bay from May to November, and can increase dangerously at times. “You can take a glass of water from Sandusky at about any time during those months and it will be greenish in color,” Bullerjahn said. Managing the bay’s algae situation is different from those of Maumee Bay and Lake Erie’s western basin, he said.

During an open forum about toxic algae held at Firelands, the superintendent of Sandusky’s water supply talked about the challenges he faces every year.

Doug Keller said his focus this summer is trying to “survive the 2015 algal bloom season and be able to supply the water and make sure we can handle all the algae toxins that do come in and remove them.”

Keller also said the Toledo crisis spurred them to create an emergency response plan if there is a harmful algal bloom breakthrough. “It’s lose sleep time sometimes in the summer,” he said.