Network leader bridges the distance between BG and Colorado 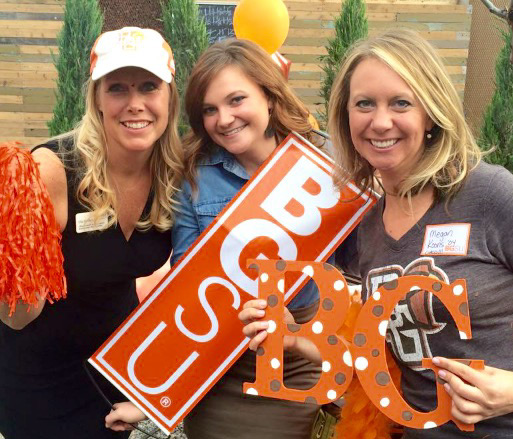 This year, Megan Koons made the 1,200-mile gap between Ohio and Denver a little smaller.

When the 2004 BGSU graduate realized her dream of moving to Denver in 2011, she didn’t know a soul. But thanks to her, when former Falcons and other Ohio transplants make the same trek, it won’t be so daunting.

That’s because not only did Koons give new life to BGSU’s Denver alumni network, but she also spearheaded OhCo, a network of alumni networks of Ohio colleges.

“In Denver, it’s kind of a running joke that everyone you meet is from Ohio,” Koons said. “There are so many people from Ohio out here. And I kept hearing this and I thought, ‘There’s got to be some way to connect everybody who’s moved out here.’ So, I contacted all the other alumni contact chairs and proposed the idea to them and they thought it was a great idea.”

Koons, who earned a bachelor of science degree in dietetics at BGSU, is a pediatric dietitian at Children’s Hospital Colorado. She worked at a similar position at Cincinnati Children’s Hospital Medical Center for five years. When the opportunity became available in Denver, she jumped on it.

“Denver is a great place for young, single professionals,” said Koons, 34. “Everybody is flocking here like crazy.

“I really kind of moved out on my own. So, I think that’s one thing that’s nice about having alumni networks and groups like this out here. So many people have moved out here by themselves, it really kind of helps you connect back to Ohio.”

For OhCo, that connection started at the end of April with the alumni network’s initial event.

Koons said that she and the other network chairs couldn’t have been happier with the turnout.

“The All-Ohio Happy Hour was our first event,” said Koons, who grew up in Dayton. “We had 325 RSVPs. We had really good feedback and seemed like everyone was really interested in getting this going.”

Organizing social activities seems to come naturally to Koons. She’s also the social chair for the dietitian department at the hospital.

“I think it’s my second calling,” she said.

OhCo was inspired by the naming convention of some of Denver’s trendier locales such as LoDo -- short for Lower Downtown -- and it seems to be catching on.

The new network has 337 likes on its Facebook page and BGSU grads make up about a fifth of the total.

“Even though we only have 65 people right now, there are a lot more living out here,” said Koons, who has strong ties to BGSU -- her parents, a brother, an uncle and multiple cousins all attended the University. “We’re trying to get more people connected on Facebook and some of the other social media sites.”

“I just started doing the Bowling Green network about a year ago because we didn’t have an active network. I first got that restarted. So, going along with that, starting both of these at the same time, it’s been helpful to connect to the other network leaders to get ideas of what they’re doing. We can brainstorm and help each others’ groups come up with ideas and find out what works best.”

The OhCo Facebook page also can be used by the network chairs to share events and draw from a larger pool of participants. For example, the Ohio State network has hosted watch parties for the Cleveland Cavaliers throughout the NBA playoffs.

“Other groups can post to the Facebook page too and share their events,” Koons said. “Because one common thing when I met with all the different alumni networks out here is, sometimes you do spend a lot of time planning a lot of events and you don’t get a huge turnout. So, sometimes, it’s nice to collaborate with other networks to draw a bigger attendance and kind of help spread the word.”

That kind of collaboration could lead to employment networking for OhCo in the future, but not yet.

“I think down the road there could be a networking component to it,” she said. “Right now, we’re just trying to build up the group and get the word out.”

Next up on the OhCo calendar is a baseball game July 26 at Coors Field with the Cincinnati Reds in town to play the Colorado Rockies. There will be a pregame meetup so people can socialize beforehand, and there is a reserved group of tickets so OhCo members can sit together.

Koons envisions some football events in the fall and already is setting the stage for the end of the year.

“I’d like to do some kind of charity event around the holidays whether it be a food drive or toy drive or something like that,” she said.

So, does Koons have a lot of friends in Colorado now?

“I do and a lot of them are from Ohio,” she said, laughing.

For more information about the BGSU Denver alumni network, go to Facebook.com/BGSUDenverAlumni or email Megan Koons at megankoons@yahoo.com.

For information about finding or starting a network in your area, go to bgsu.edu/alumninetwork.