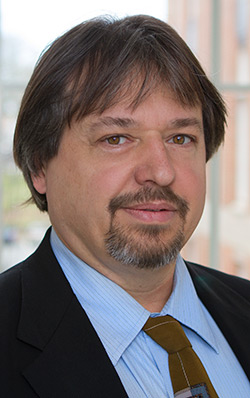 A new director for BGSU’s Center for Photochemical Sciences plans to raise the visibility and outreach of the center at the local, regional, national and international levels.

Dr. Malcolm D. E. Forbes, a professor at the University of North Carolina (UNC), Chapel Hill, begins his role as the director of the center July 1. He leaves the UNC chemistry department after 25 years of research, teaching and mentoring the next generation of scientists.

“With the BGSU Center for Photochemical Sciences’ 30-year tradition of compelling research and excellent scholarship, we believe Malcolm Forbes will be a strong leader to maximize the research and outreach potential for the center and the University,” said President Mary Ellen Mazey.

A spectroscopist by training, Forbes’ research specializes in the structure, reactivity and dynamics of free radicals. His work is the topic of more than 100 publications and more than 150 presentations nationally and internationally. Throughout his career, Forbes has earned numerous honors and awards, including a National Science Foundation (NSF) Young Investigator Award, and an NSF Postdoctoral Fellowship.

Forbes’ research program is highly interdisciplinary, collaborative and international in scope. With a J.W. Fulbright Senior Scholar award in 2008, he was a visiting professor at the International Tomography Center at Novosibirsk State University in Russia, and as a Japan Society for the Promotion of Science Foreign Fellow, he visited Tohoku University in 1997 and Shizuoka University in 2004.

Over the past three decades, he has secured over $5 million in funding, the majority from the National Science Foundation (NSF), as well as from private foundations and industry. From 2011-14, Forbes served as a program officer at NSF, overseeing a budget of $18 million across many NSF Division of Chemistry programs. “I learned an enormous amount about good grantsmanship in a very short time,” Forbes said of his tenure at the agency.

“We look forward to his expertise at acquiring funding for research and development,” said Dr. Michael Ogawa, vice president for research and economic development and dean of the Graduate College. “BGSU will benefit from his extensive work with the National Science Foundation and the network of national and international collaborations he has developed at UNC.“

The BGSU center brings together research faculty from the departments of chemistry, physics and astronomy, and biological sciences who share interests and expertise in the interaction of light with matter. Previous research from the center has resulted in practical applications such as the use of light to induce chemical reactions, design of sensors for explosives and drugs with light-based readout. The center put Bowling Green State University on the map among the global community of scientists.

“The center has a rigorous and deeply scientific environment,” Forbes said about his decision to take the position. “There is already a great nucleus of people in place at BGSU, with broadly based scientific interests.” He pointed out that the center is “unique, as the only institution in the world that grants a Ph.D. degree in photochemical sciences.” Currently, about 55 students are enrolled in the center’s doctoral program.

The collaborating faculty in the center includes Dr. H. Peter Lu, an Ohio Eminent Scholar who has made significant advances in high-resolution microscopy that allows single enzyme molecules to be studied as they undergo structural changes while catalyzing chemical reactions. Lu’s research contributions were recently recognized by his election as a Fellow of the American Physical Society.

Forbes plans to leverage the successes of the past and expand the collaborations across disciplines to help the center “grow up and out.” Over the next several years, he looks forward to adding at least one senior-level scientist to the faculty, and several new junior faculty, allowing him to mentor the next generation of leaders in the field of photochemistry.

The center has been supported by federal agencies such as the National Science Foundation, the National Institutes of Health, the Department of Energy and the Department of Defense at the level of about $3 million per year for the past several years. Forbes will focus on intensified grant writing by faculty to fund innovative research, additional communications to enhance the center’s visibility and a new initiative to educate K-12 students and the public about photochemical sciences.

“His experiences in the lab and working with faculty around the world will enhance the good work that is already being done here and secure the center’s reputation as a premier facility,” said Dr. Raymond Craig, dean of the College of Arts and Sciences.

Forbes said his goals are to increase the number of individual and collaborative research grants to center faculty, to engage local industrial chemical companies in center activities, and to recruit the highest quality faculty and students from across the globe to BGSU.

“Breakthroughs and innovations in science and technology very often occur at the intersection of different fields, so the fostering of new collaborations within the center as well as externally is critical for our future success,” he said. “BGSU has given me an incredible opportunity to work with a talented and collegial pool of people with great ideas. I expect great things to happen here on my watch.”