Former Falcon Baseball player Terry Bork ’70 recently visited campus at the end of a 120-mile training ride in preparation for the 878-mile Race Across the West in mid-June. He rode in from Hudson, Ohio, where he and his wife Kay had been visiting their son after another training ride from Cincinnati during which the endurance bicyclist had covered 221 miles in just over 12 hours.

While the idea of bicycling 350 miles in a couple of days would strike most people as extreme, it represented a fairly typical training scenario for the 67-year-old alum. It’s all part of getting ready for the June race, which is a stepping stone to compete in next year’s Race Across America — considered by many to be the world’s toughest endurance bicycle race.

Bork was on campus to speak to Falcon Baseball head coach Danny Schmitz and the team about what his BGSU experience and time as a student-athlete have meant to him in his career and in shaping his personal life.

“I want to impress upon you the importance of being an athlete for life,” said Bork. “Being a Falcon student-athlete is a great accomplishment, but it’s just the beginning. We’re at our best when we stretch ourselves and set high goals … that’s what athletics is all about, and it sets the tone for your entire life.” 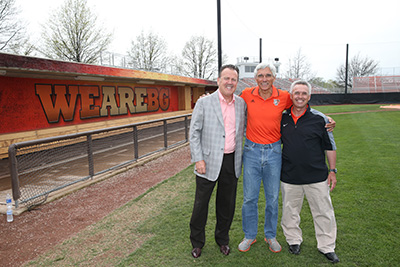 Falcon Hall of Famer Gary Haas (left) was on hand with Coach Schmitz (right) and the entire Falcon Baseball squad to greet Terry Bork (center) and to show his support for the endurance bicyclist and his efforts on behalf of the “Knock it out of the Park” campaign to renovate Steller Field. Haas, who just last year set a new standard for giving by a former Falcon student-athlete with his $1 million commitment to Falcon Baseball, has provided a foundation that BGSU Athletics and Bork hope to build upon.An audacious goal at any age

Terry described his plans to compete in Race Across the West and Race Across America as his “big, hairy, audacious goal.” He went on to say that he believes all of us need to have big dreams and to get outside of our comfort zones. His ultra marathon bicycling aspirations certainly demonstrate his commitment to these ideals — neither race is in anybody’s comfort zone.

The Race Across America is not a leisurely tour … anything but. It is arguably the world’s most challenging ultra marathon bicycle race, and must be finished in 12 days or less. The few riders who take up the challenge over the age of 60 get an extra 20 hours to cross the finish line. Incredibly, it covers 3,000 miles coast-to-coast across the U.S. … from Oceanside, Calif., to Annapolis, Md.

Bork will be competing in the solo division against elite endurance bicyclists from around the world. Even at this elite level, around 50 percent of all competitors typically drop out due to exhaustion or for medical reasons.

As a solo racer, Bork first competed in one of 30 qualifying events that are held around the world. Last fall he completed the Ohio Cycling Challenge, which begins and ends in Dublin, Ohio, and involves a 400-mile journey through the hilliest part of the state. He finished with a time of 28 hours and 18 minutes: Good for second place overall and first in his age category.

This year’s Race Across the West runs from Oceanside to Durango, Colo., covering nearly 900 miles across the rugged American West in just over three days. Participants must cross the Coast Range, Imperial Dunes and Monument Valley before finishing in the San Juan Range of southwest Colorado. According to Bork, this presents a number of serious challenges beyond the distance and time frame.

“There’s a lot of climbing in the beginning, then, after descending the “Glass Elevator,” you have 275 miles of desert to cross in California and Arizona, with heat that can reach the 115 to 120 degree range,” said Bork. “Then we start climbing towards Prescott and Flagstaff, where the temperatures could drop into the 30’s and 40’s at night.”

In support of Falcon Baseball

Most riders in the international field (representing 35 countries over the years) use the race to raise awareness and money for their favorite causes. For Bork, BGSU Athletics, and the Falcon Baseball program in particular, seemed to be a perfect fit as both sponsor and benefactor.

“I am excited to be partnering with the University as our primary sponsor,” Bork said. “And I hope my efforts as an endurance bicyclist, former Falcon Baseball player and lifelong athlete inspire my teammates, fraternity brothers and fellow alumni to help meet our financial goals for renovating Steller Field.”

The “Knock it out of the Park” campaign is beginning to ramp up as an integral part of Falcon Athletics’ efforts to bring our facilities up to the high standards necessary to attract the finest student-athletes and coaches.

“This campaign is a critical effort for the future success of Falcon Baseball,” Bork noted. “When combined with an emphasis on scholarship support, it will provide the opportunity to recruit the next generation of MAC Baseball Championship talent.”

Bork’s five-year plan begins in earnest with this year’s Race Across the West as a prelude to the 2016 Race Across America, which nobody over 64 has ever finished. Bork could very well be the first, while at the same time accomplishing the first installment of his long-term goal to be the only person to ever complete the Race Across America over the age of 70.