BOWLING GREEN, O.—A quick read of Dr. Jonathan’s Bostic’s list of accomplishments since coming to BGSU would suggest he had been with the School of Teaching and Learning for quite some time, so extensive is it. But, in fact, Bostic has only been with the mathematics education department for less than four years. 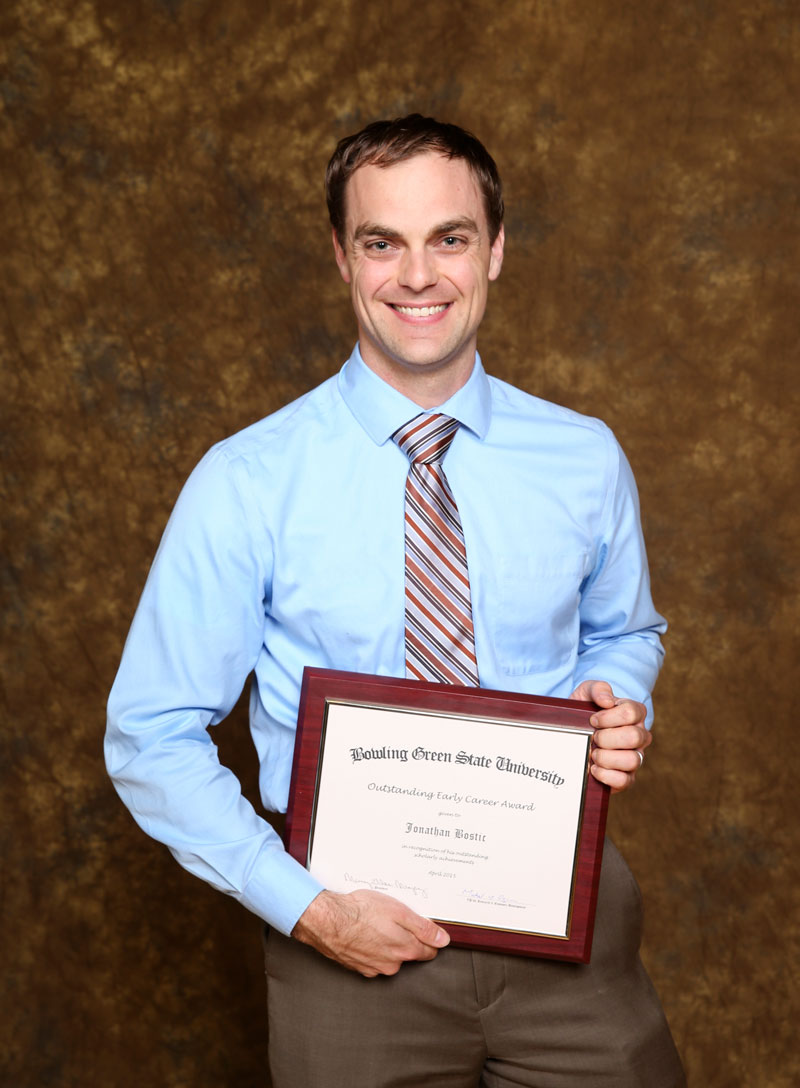 In that short time, he has compiled a remarkable number of achievements. In recognition of his scholarship, his energy and enthusiasm for the preparation of mathematics teachers and his outreach to the public schools, Bostic has been selected for the Outstanding Early Career Award, presented by BGSU’s Office of Sponsored Programs and Research.

The award is designed to enhance the academic career of junior faculty by providing discretionary funds for the support of future scholarly activities. It brings a $1,000 credit to the recipient's discretionary research account, in addition to a $2,000 cash award.

Bostic’s scholarly work has been outstanding, said nominator Dr. Dawn Shinew, director of the School of Teaching and Learning. “Not only has he taught four different courses – consistently scoring receiving high evaluations on student evaluations – but his writing and grant work have also exceeded all expectations for a junior faculty member.”

Bostic, an assistant professor, has found kindred spirits in colleagues Drs. Daniel Brahier, professor of teaching excellence, and Gabriel Matney, an associate professor, who share his passion for helping public school teachers improve not only their own knowledge of math content but their teaching skills as well. With them as co-principal investigators, he has written seven Improving Teacher Quality grants in his first three years (three as lead author and PI, as well as three as co-PI) and was also awarded an Ohio Mathematics and Science Partnership grant in 2014. These nine external grants total almost $1.5 million. He also received the Fahle Research Assistant Award from the College of Education and Human Development in 2012-13 for $20,000.

His record of scholarship is also outstanding. Bostic has co-authored two book chapters and has published 12 highly competitive, peer-reviewed journal articles since coming to BGSU. He currently has three more papers under review and has also published 11 conference proceedings that are refereed papers. In addition, he has been the invited speaker at two national/international conferences and has 20 refereed conference presentations at the national/international level.

As a faculty mentor, Bostic has been very active in assisting both graduate and undergraduate students in developing their own research skills and agendas, Shinew said. He served on a master’s thesis committee and has advised eight undergraduate students in the Science and Math Education in ACTION program in their senior capstone research projects, and served as an Honors Project adviser for another student. One of his papers, published in the Teaching Children Mathematics journal, was co-authored by an undergraduate methods student, exemplifying one of BGSU’s goals to integrate research into the undergraduate experience.

“Dr. Bostic provides a positive model for today’s scholar, one who balances and integrates teaching, research, and service in ways that serve his students and his discipline,” Shinew said.