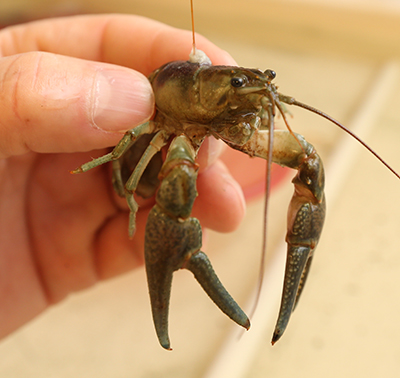 BGSU neuroscientist Dr. Robert Huber will be sharing his expertise with colleagues at Harvard University next year as a Fellow of the Radcliffe Institute for Advanced Studies. Best known at BGSU for his research into the neurochemistry of behavioral phenomena such as aggression and addiction in crayfish, Huber also has specialized experience in computer vision, which he will apply to Harvard’s quantitative behavioral study of Drosophila, or fruit flies.

“This is a relatively new field of computational ethology,” Huber said. “It’s an attempt to apply novel computer tools to describe, characterize and understand behavior.”

The sophisticated skills he gained as a young graduate student working for Apple when the first Mac computers were coming on the market have stood him in good stead as a neuroscientist, Huber said.

He has already been collaborating with the Harvard scientists on refining their study, which has so far revealed previously unknown aggressive behavior among male Drosophila. A fascinating, high-speed film of a male fruit fly eating from a container of sugar water (which also contains the added attraction of a female fly corpse) shows what happens when another male is introduced into the chamber. A violent scuffle ensues, with the first male fending off the intruder.

“The computer technology gives a quantitative view of the behavior,” Huber said. An article on the results has already been published in the international scientific journal PLOS One. Huber is also involved in organizing a conference on aggression for the National Academy of Science.

As with Huber’s studies of crayfish, the eventual goal is to know not only what the subjects do, but which brain circuits are involved, and which role neurochemicals play in the behavior.

While Huber is in Massachusetts, he will continue his investigations with the help of the graduate and undergraduate students who work in his BGSU lab. Along with studying the roots of addiction, he is researching the effects of psychostimulant drugs on the crayfish heart with BGSU collaborators Drs. Moira Van Staaden, biology, and Dr. Pat Sharp, psychology; and the behavioral effects of new, synthetic drugs of abuse with Dr. Jon Sprague, director of the Center for the Future of Forensic Science.

Long believed to be the preserve of humans, addiction was discovered about 15 years ago to be possible in other mammals, from primates to mice and rats. Then about five years ago, it was found to extend beyond the vertebrates. The crayfish, with its modular organized nervous system and relatively few and large neurons, turned out to be a good subject for testing the effect of psychostimulants on the nervous system, Huber said.

Subjects show increasing responses to a three-day, repeating exposure to amphetamines (“psycho-stimulant sensitization”), linked to craving; this serves as a strong predictor and indicator of vulnerability to addiction. Those who are especially vulnerable will show a marked increase in neural activity. In humans, susceptibility has also been linked to personality type, particularly “Type A” personalities, or those who show a highly motivated approach to their surroundings, and people we think of as “thrill seekers,” Huber said.

Huber’s research into the neurological roots of addiction has revealed strong connections between reward, learning and addiction — and, perhaps most surprisingly, plant biology. “All highly addictive substances are plant compounds that plants use to defend themselves,” Huber said. “They all are associated with a bitter taste. And they all activate the learning process. We want to know where and how this learning happens and how drugs are involved.”

Some plants, for example, protect themselves by producing a substance that stimulates the insects who ingest it when eating the plant to become more active, which in turn defeats their natural camouflage by making them more visible to the birds that eat them. “The question is why it would be advantageous to be also addictive,” Huber said.

Whether in crayfish, insect, mammal or human, substances such as cocaine, morphine, amphetamine, ephedrine, and to a lesser extent, nicotine and caffeine, all artificially activate the reward system by triggering the release of compounds such as dopamine, norepinephrine and serotonin, Huber said. These cause increased neural activity and tell the brain “something good is happening,” he explained.

“It’s when an individual loses control over intake and tries to acquire the drug even in the face of negative consequences that we call it addiction,” he said.

Using the operant behavior chamber, Huber and his lab present the crayfish with learning challenges, providing rewards in the form of the plant-based stimulants to see how the chemicals affect learning and trigger craving. The crayfish learn the environmental “cues” associated with the chemical reward. The computer application measures activity that demonstrates their preference for the areas they associate with good outcomes.

“Reward is an essential part of learning,” Huber said. “When the brain perceives the outcome as favorable, the nervous system responds. It’s an essential part of life. Even planerians — flatworms — can do it. It was built into the nervous systems of organisms early on in evolution and has remained intact. It is hard to develop such an integral characteristic, and even harder to change.”

And it may help to explain why addiction can be nearly impossible to defeat. His team has found that even after a drug-free period in which the crayfish unlearn the environmental cues associated with the stimulant reward, it only takes a tiny amount of stimulant to send the invertebrates right back into full addiction mode.

“We want to learn what is going on in the brain during addiction,” Huber said. “Once it’s there, it’s very hard to extinguish. That’s why even after 30 years of being away from drugs, people can quickly become addicted all over again in the right circumstances.”

If he and his team can find the route to accomplish that, it would hold great promise for freeing people from the clutches of addiction.