Researchers delve into the mysteries of the whip spider

The rain forest of Costa Rica presents a jungle-esque maze of dense vegetation, with the ground under it a snarl of exposed roots and heavily matted decaying plant material.

But in the inky black of night in that seemingly endless and impossible labyrinth, BGSU professors Drs. Dan Wiegmann and Vern Bingman are searching for a portal that could reveal the science behind one of the more sophisticated and puzzling navigational systems in the natural world.

Wearing headlamps and armed with the trust that nothing too threatening will appear in their path, the duo are undertaking a study of whip spiders—a creature that is both ancient and advanced, both creepy and fascinating. 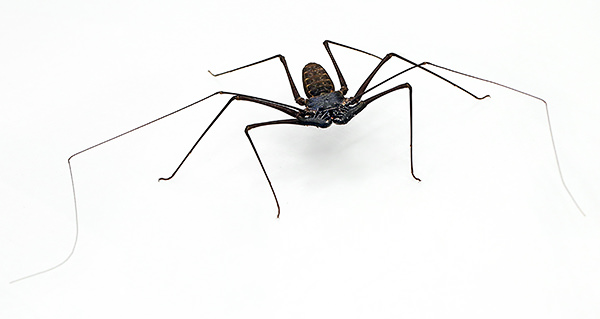 Whip spiders have this uncanny knack for finding their way back to their home refuge, which is usually located in the buttresses of large tropical trees. Even with their relatively poor eyesight, even in the dark (since they are nocturnal), and even in the endless tangle of organic material that is heaped on the forest floor, with no trails or markings to show the way, they find home.

“They possess a remarkable navigational ability,” said Bingman, a professor of psychology. “They have this site fidelity. They return to the same tree each time and you just wonder how they do it.”

How they do that is an intriguing question, and it is the purpose of a research project the two professors have undertaken, in conjunction with colleagues from Nebraska and Arizona. The work has been assisted by a Building Strength grant from BGSU, and grants from the National Geographic Society Committee for Research and Exploration and the National Science Foundation.

Based on early fieldwork, the researchers have made the preliminary conclusion that whip spiders do not rely on a scent trail to find their way home, like some animals do, and they do not rely on any type of measuring or geometry to return to their home, and they certainly don’t rely on visual markings.

But they do manage to come back to their home tree. The answer to how they do that is likely found in their unique “whips” and in the brains of these creatures, which are believed to have been crawling around the tropics for millions of years.

“The fact that they can navigate in that dark forest is fascinating,” said Wiegmann, a biology professor whose expertise is in the study of animal search behavior. “I hope we can learn something about the contributions of sensory inputs and neurological control of what I would consider very complex behavior.”

Whip spiders, which are also called tailless whip scorpions, are neither spiders nor scorpions, but belong to a separate order of arachnids. They are amblypygids, a not-so-flattering term that means "blunt rump”, since they have no tail.

While spiders have eight legs, whip spiders have six legs and a pair of long, thin whips called antenniform legs that are not used for walking. These whips are several times longer than the body and are equipped with numerous sensory receptors, which are used to locate prey, and, the researchers suspect, to navigate the irregular terrain of its range.

“These receptors are tuned to chemical cues and mechanical cues, so they basically feel their way through the world,” Bingman said. Once prey is located with the whips, these nocturnal hunters use their pincer-like pedipalps to grab the prey, and then crush and devour it.

“They are predators in every sense of the word,” he said.

The two professors made their initial trip to Costa Rico two years ago, and then last summer Bingman returned with BGSU graduate student Jake Graving for some additional field study. The team will be back in field this summer and include lab study of the whip spiders in their research.

During the 2014 work in the rain forest, a group of whip spiders were moved about 10 meters from their home trees, and tracked through the use of micro transmitters glued to their backs. Before they were released, some had their eyes covered with nail polish, and some had their whips covered. Whip spiders in a control group were released with their eyes and whips unaltered.

“Most insects rely on path integration. They need the information on the way out in order to find their way back, but that does not appear to be the case with whip spiders. This implies that they have a robust spatial memory.”The results of the test were, at a minimum, intriguing. Most of the whip spiders in the control group returned to their refuges, but the ones with nail polish covering their eyes actually returned faster. The whip spiders that had their antenniform legs covered—none of them returned and none even got close to their home tree.

“So what we have now is a growing body of evidence that their chemical senses play a critical role in this remarkable navigational ability,” Bingman said.

“Most insects rely on path integration. They need the information on the way out in order to find their way back, but that does not appear to be the case with whip spiders. This implies that they have a robust spatial memory.”

So although they might look like something dreamed up on a horror movie creator’s sketchpad, whip spiders appear to have significantly more brainpower than afforded at first blush.

“I was shocked with the information they brought back,” Wiegmann said about the summer of 2014 work. “These whip spiders have this navigational ability that we see in vertebrates, but they do so using the computational power of a substantially smaller brain.”

The pair hopes to unlock some of the secrets of the whip spider navigational system and better understand how creatures this small can apparently process different information and then solve complex problems.

“You just wonder how they do it.”“A lot of biologists are just seriously curious about the real world, and that is the motivation,” Wiegmann said. “My hope is that we can learn something about what I would consider a very complex neurobiological challenge. We want to understand how the neurons that control this behavior talk to each other.”

Bingman said the behavior exhibited by whip spiders is so complex that it is likely the result of combining different sources of information to create representations of the environment that can then be used for navigation.

He said information from the study could be used as a biological inspiration relevant to miniaturization projects, artificial intelligence systems, and robotics.

“In the end, we hope we will better understand how nature has engineered what is basically a micro-information processor, and succeeded in producing a system that can gather and then store information, and take the gathered information and put it in the context of the stored information to produce a meaningful output. That’s the dream. That seals the deal.”

The big question, however, is a familiar one for these BG scientists.

“Personally, I am just motivated by curiosity,” he said. “You just wonder how they do it.”