Attendees of the 3rd annual Women in Business Leadership event, hosted by the BGSU College of Business, had the opportunity to hear from and network with successful women business leaders. The theme this year was “Designing Your Career.” 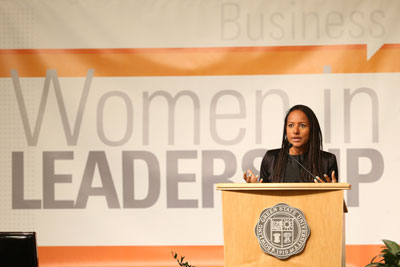 “Embrace yourself, realize your true value, have integrity, stay independent and do something meaningful every day,” DuBois Barnett said.

DuBois Barnett has had a successful career working for Harper’s Bazaar, Essence, Teen People, Honey magazine and Ebony—the oldest and largest black magazine in the country where she was editor-in-chief until 2014.

“The major turning point for my career was working for Teen People,” she said. “That’s where I became the first black woman to run a major mainstream magazine in the country.”

DuBois Barnett gave advice to women on how to become successful in their careers. Her seven steps include: embracing fear as growth, be true to yourself, realize your value and demand the best, put into the universe what you want to give back, have integrity, stay independent and do something meaningful every day.

“Get the absolute most out of life as you can, figure out what makes you happy, commit to your dreams and not somebody else’s dreams,” she said.

Prior to DuBois Barnett’s speech, three successful BGSU alumni, who are leaders in their industries, presented to the group. They were Pamela K.M. Beall ’84, who is director and president of MPLX, Maribeth Rahe ’70, president and CEO at Fort Washington Investment Advisors, Inc., and Jan Heppe ’74, president of the Americas, Burberry.

Each presenter shared stories of how they achieved success throughout their career paths.

Beall talked about Marathon Petroleum’s success as a Fortune 50 company. She said even though men dominate her company’s executive ranks, 21 women leaders are just below at the officer level.

“I think it’s an exciting time to be a young female at Marathon. There’s tremendous opportunity,” she said.

Beall also touched on the challenges she faced in her personal life. She chose not to have a family because she wanted to focus all of her energy on her job. Today she has lifelong friends she has made since the beginning of her career.

Her biggest advice? “Enjoy the journey, it is the reward,” she said.

Working in international business, Rahe has had an extensive career traveling overseas and across the country. She gave her 15 rules to a path of success. Some of them include: be strong not weak, learn not only from your experience but also others, be open-minded, flexible and prepared for change, trust your instincts, never settle for the status quo and do as you do not as you say.

“Make sure whatever you say, you do it,” she said.

Rahe’s biggest advice was to not burn any bridges. She gave the example of being invited to return to two major corporations.

As president of the Americas for Burberry, Heppe outlined her career path during a presentation that showed the ups and downs of what she went through to get to where she is today.

“Your career journey is not a straight line. It measures success in different ways as you explore it,” she said.

She also stressed the importance of working as a team.

“It’s about people, people,” she said. “No matter what you do or where you go or what job you have, you’re working with someone on the other end. Learn how to motivate and teach people.”

The recurring advice from each presenter was that they took risks, embraced change and challenged themselves—whether it was relocating to a new city, or putting themselves in positions that made them unfamiliar or uncomfortable.

“Be honest, don’t be afraid, stretch yourself and try new things. Learn as you go, what you want will change. You must have grit because change is inevitable. Love what you do,” said Heppe.

“Take opportunities when they are offered to you, get out of your comfort zone,” said Beall.

“If you stay in that comfort zone, you will never grow and become the woman you are meant to be,” said DuBois Barnett.

The next Women in Leadership event will be Sept. 30.